The coconut crab, or “robber crab” (Birgus latro), is the largest terrestrial arthropod in the world, with individuals weighing up to four kg (about 9 pounds).  They have a wide range: 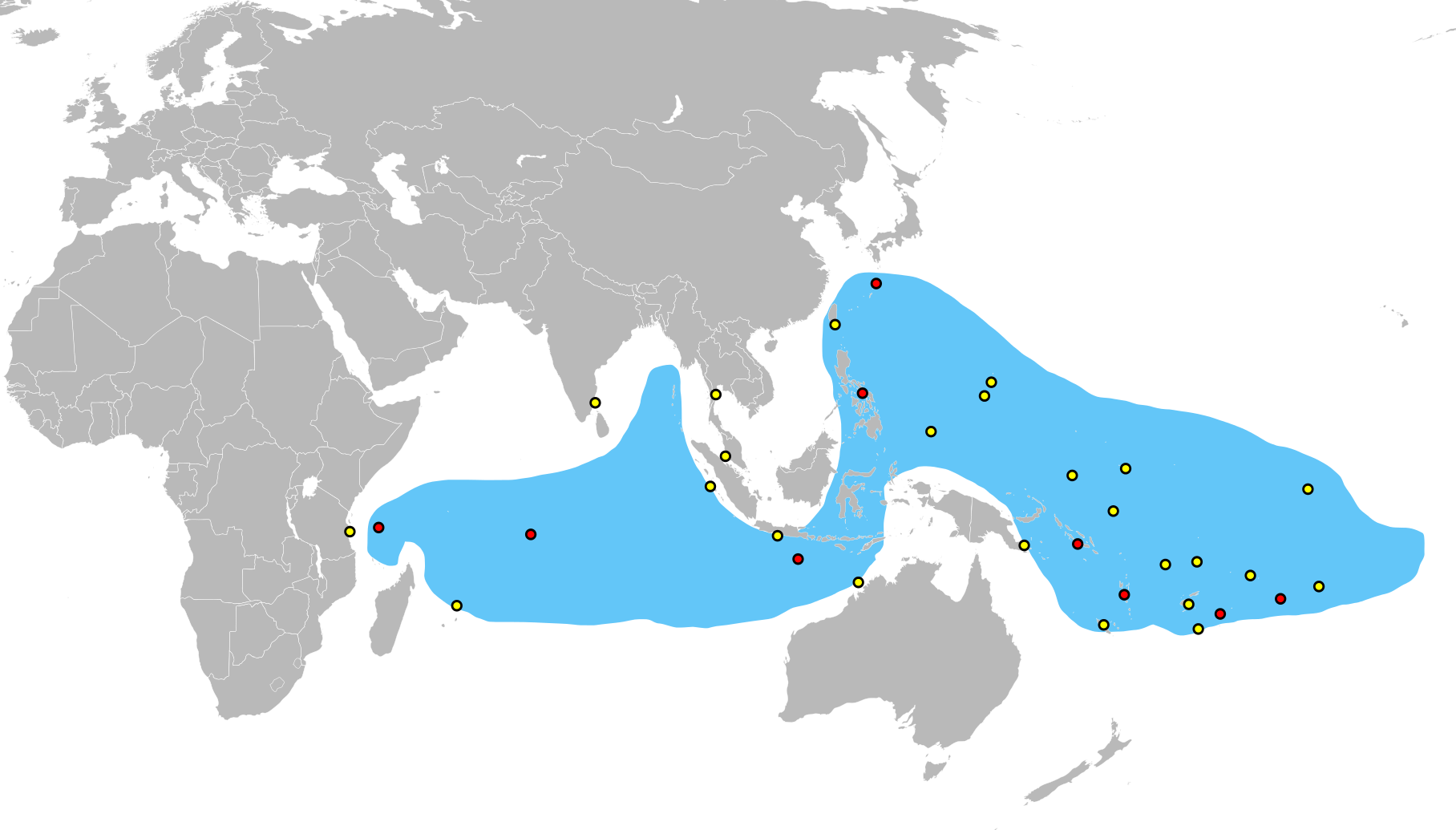 But because of their size and the fact that they’re tasty, they’ve been largely driven extinct by humans on populated islands. Here’s how big they are: 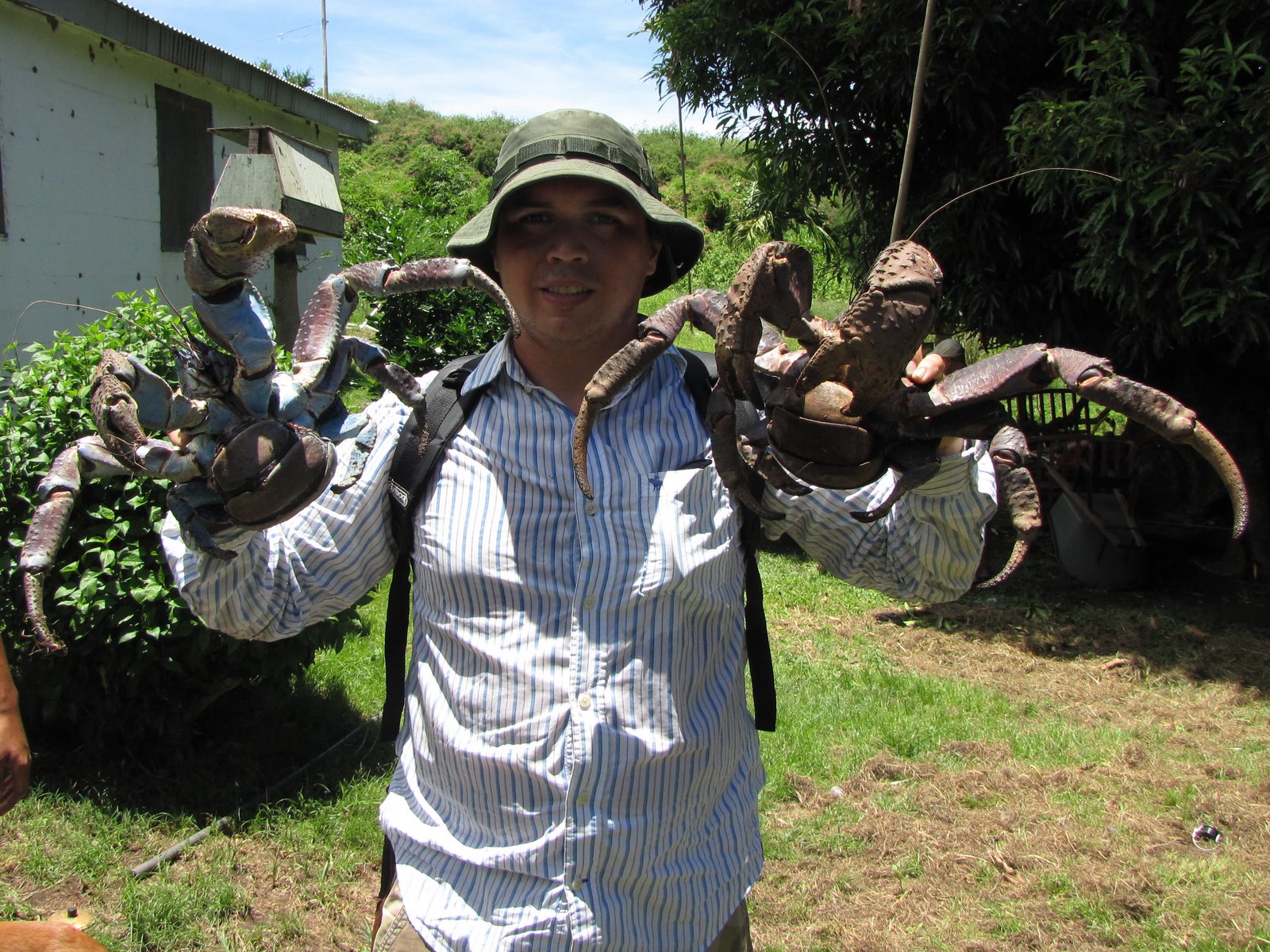 They come in different colors, often red or blue. Here’s a beautiful blue one: 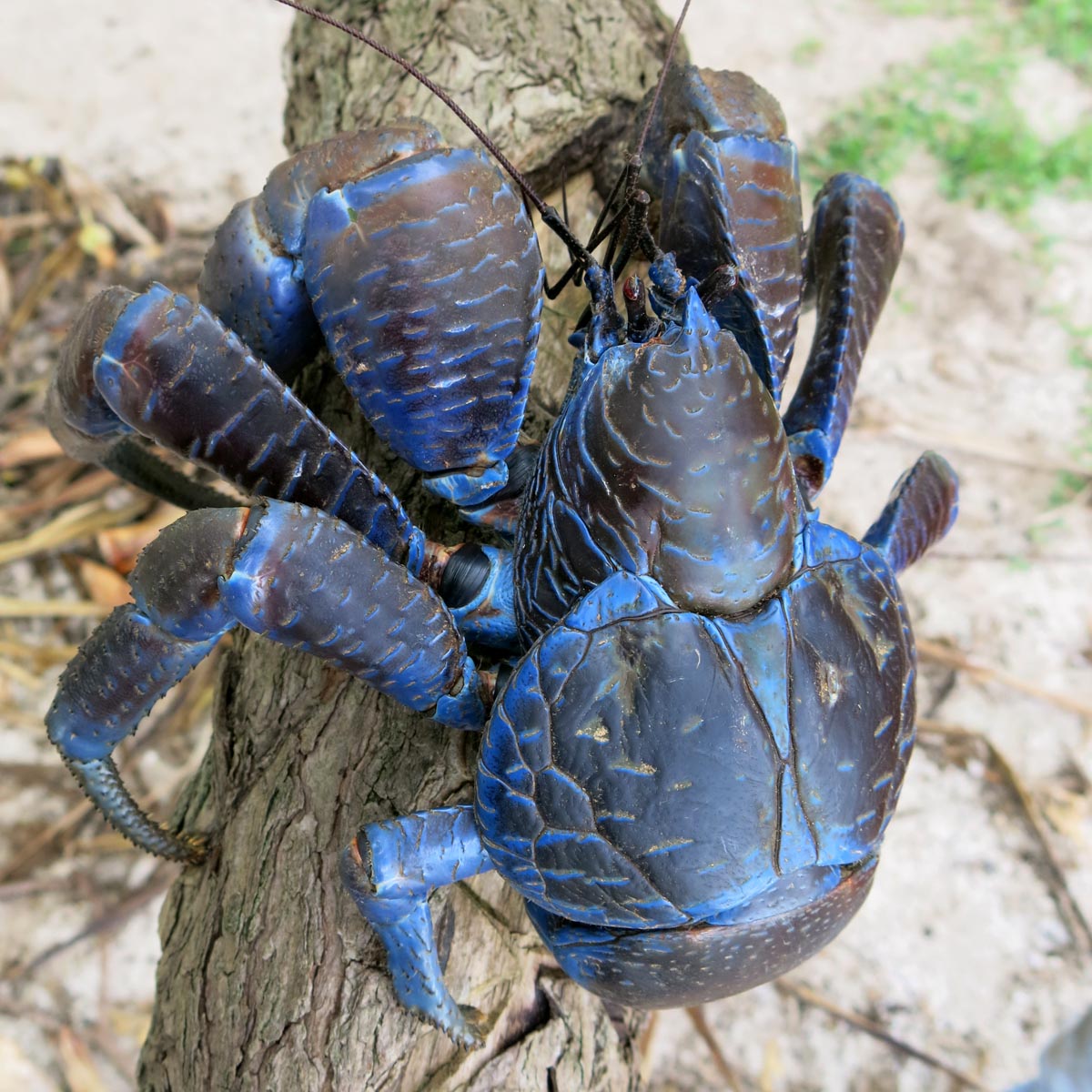 Two facts about these species. First, they’re fairly close relatives of the hermit crab, and in fact are descended from hermit crabs that occupied shells throughout their lives. But this species is sufficiently large as to have few predators besides humans, and so only the very young and small coconut crabs live in shells (sometimes bits of coconut shells). They’re also completely terrestrial, and will die if put in salt water.

You can see the hermit-crab ancestry in the reduced and curled abdomen behind the carapace: 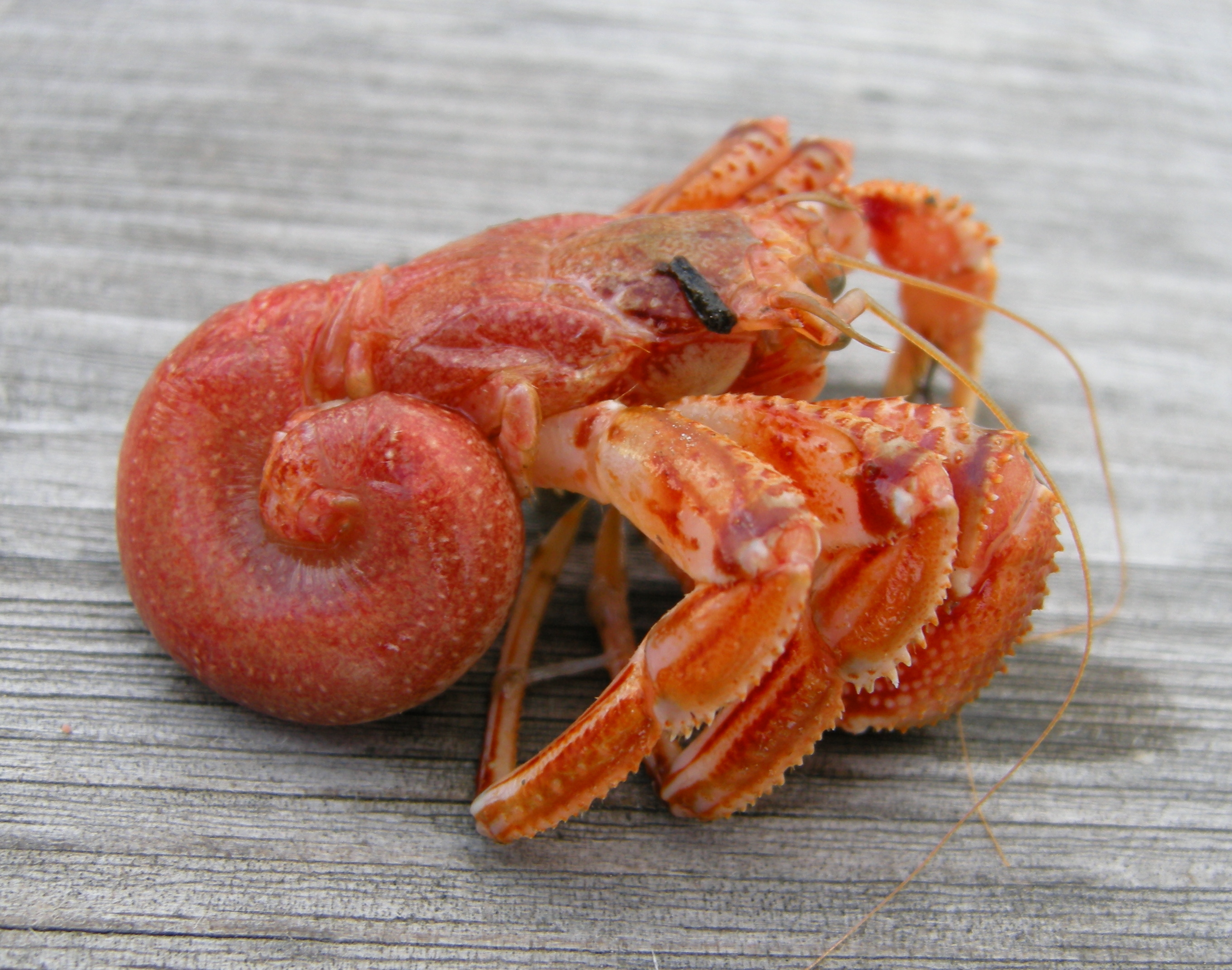 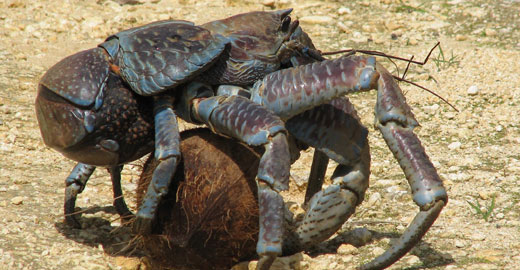 I’ve written two earlier posts on coconut crabs (here and here), including photos by reader Dennis Hansen from the Indian Ocean of Aldabra. There they invade the field station, making off with leftover food from the table, and they can also open garbage cans, as they have great climbing skills: 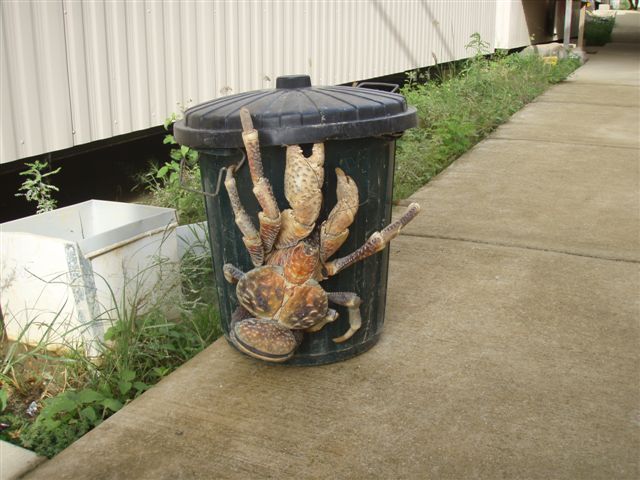 They’re HUGE! Second Fun Coconut Crab fact: they do indeed open coconuts, and can climb trees to get them, though they’re omnivores and coconuts are not a main part of their diet. Wikipedia gives the details (my emphasis):

The diet of coconut crabs consists primarily of fleshy fruits (particularly Ochrosia ackeringae, Arenga listeri, Pandanus elatus, P. christmatensis), nuts (coconuts Cocos nucifera, Aleurites moluccanus) and seeds (Annona reticulata), and the pith of fallen trees. However, as they are omnivores, they will consume other organic materials such as tortoise hatchlings and dead animals. They have been observed to prey upon crabs like Gecarcoidea natalis and Discoplax hirtipes, as well as scavenge on the carcasses of other coconut crabs. During a tagging experiment, one coconut crab was observed killing and eating a Polynesian Rat (Rattus exulans). Coconut crabs may be responsible for the disappearance of Amelia Earhart’s remains, consuming them after her death and hoarding her skeletal remnants in their burrows.

The coconut crab can take a coconut from the ground and cut it to a husk nut, take it with its claw, climb up a tree 10 m (33 ft) high and drop the husk nut, to access the coconut meat inside. They often descend from the trees by falling, and can survive a fall of at least 4.5 metres (15 ft) unhurt. Coconut crabs cut holes into coconuts with their strong claws and eat the contents, although it can take several days before the coconut is opened.

Thomas Hale Streets discussed the behaviour in 1877, doubting that the animal would climb trees to get at the nuts. In the 1980s, Holger Rumpff was able to confirm Streets’s report, observing and studying how they open coconuts in the wild. The animal has developed a special technique to do so: if the coconut is still covered with husk, it will use its claws to rip off strips, always starting from the side with the three germination pores, the group of three small circles found on the outside of the coconut. Once the pores are visible, the coconut crab will bang its pincers on one of them until they break. Afterwards, it will turn around and use the smaller pincers on its other legs to pull out the white flesh of the coconut. Using their strong claws, larger individuals can even break the hard coconut into smaller pieces for easier consumption.

Here’s one at work; remember that it can take them several days to do this:

Clearly, these animals must be strong. Indeed, they can lift up to 28 kg (62 pounds)—at least seven times their own weight.

This is all leading up to a new paper published in PLOS ONE by Shin-Ichiro Oka et al. (reference and free download below), in which the authors measured the pinching force of 29 coconut crabs. As you might expect, they pinch hard, exerting more force per gram of body weight than nearly any other animal, including terrestrial carnivores.  The authors used these devices in this way (caption from the paper):

And the results? Here’s what the paper says:

Here, from the paper, is a log/log graph showing the amount of force exerted by different groups as a function of their body weight. Of course larger animals in a group are capable of biting or pinching more strongly, but the coconut crab, judging by the amount of force exerted per kg of body weight, is the king, with only a few other crabs being relatively stronger:

Why did they evolve such strength and size? The authors note that these large claws not only help them procure food, including rats as well as coconuts—drupes (not nuts) native to many of their habitats—and also to drive off predators and competitors.

Because the crabs are relatively small compared to lions and alligators, I don’t think they can pinch your finger off, and I haven’t seen reports of severe wounds in humans produced by these crabs. (But they can crush plastic pens, as you can see here.) Nevertheless, if you’re lucky to come across one, you’d best handle it carefully, as the guy is doing in the photo above.

33 thoughts on “The mighty pinch of the coconut crab”