The Gifford Lectures, first given in 1898, were established by a bequest of Lord Adam Gifford, and were intended to “promote and diffuse the study of natural theology in the widest sense of the term — in other words, the knowledge of God.” In other words, they were supposed to use evidence from nature to give evidence for God (“natural theology”).  And that was how they began, with lecturers like Paul Tillich, Ian Barbour, and Alfred North Whitehead. But then the organizers decided to throw in some atheists as well, and those, including Carl Sagan, Steven Pinker, and now our own Official Website Physicist, Sean Carroll™, have given some of the best talks. Nevertheless, the emphasis is still on the evidence for theism, promoted by speakers like Alvin Plantinga, Simon Conway Morris, and Roger Scruton.

The Giffords are some of the most prestigious lectures around, and I’m pleased that Sean was able to deliver them. His were given in Glasgow: the lectures are alternated among Glasgow, St Andrews, and Edinburgh. (Wikipedia lists all the luminaries who have spoken.) The topics were drawn from his recent book: The Big Picture, which I recommend highly. He’s also a great speaker, and though I haven’t yet listened to all of these (though I have read the book), I certainly will. I present four of the five of the talks, put on YouTube, below. Sadly, for some reason the first lecture wasn’t recorded: a huge cock-up on the part of the organizers. But you can at least see the slides.

Here’s Sean’s take on his own performance from his website:

Sometimes the speakers turn their lectures into short published books; in my case, I had just written a book that fit well into the topic, so I spoke about the ideas in The Big Picture. Unfortunately the first of the five lectures was not recorded, but the subsequent four were. Here are those recordings, along with a copy of my slides for the first talk. It’s not a huge loss, as many of the ideas in the first lecture can be found in previous talks I’ve given on the arrow of time; it’s about the evolution of our universe, how that leads to an arrow of time, and how that helps explain things like memory and cause/effect relations. The second lecture was on the Core Theory and why we think it will remain accurate in the face of new discoveries. The third lecture was on emergence and how different ways of talking about the world fit together, including discussions of effective field theory and why the universe itself exists. Lecture four dealt with the evolution of complexity, the origin of life, and the nature of consciousness. (I might have had to skip some details during that one.) And the final lecture was on what it all means, why we are here, and how to live in a universe that doesn’t come with any instructions. Enjoy!

Lecture #1 has no video yet, just slides, and you can see them by clicking on the screenshot: 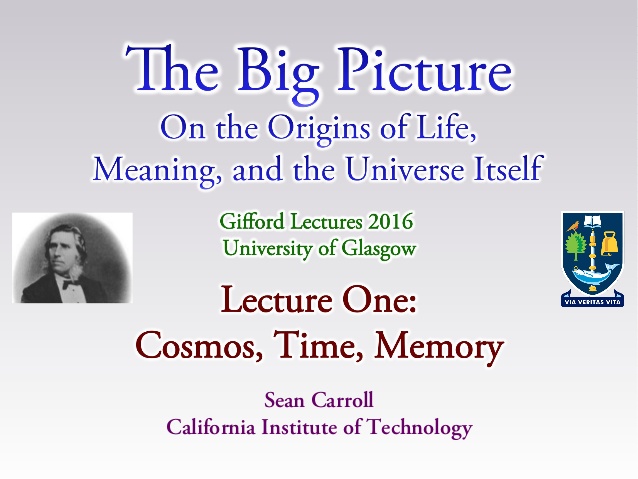