Last night after my talk I had the pleasure of meeting and talking with John van Wyhe, a Darwin/Wallace scholar at the National University of Singapore, where I spoke last night. We continued our conversation this morning when he joined Melissa Chen and me at the Orangutan Breakfast at the Singapore Zoo. Here’s a bit of his Wikipedia biography:

John van Wyhe is a historian of science, with a focus on Charles Darwin and Alfred Russel Wallace, at the National University of Singapore. He holds some academic and research positions, ranging from founder and director of The Complete Works of Charles Darwin Online, Scientific Associate, The Natural History Museum (London), a Fellow of the Linnean Society and a Member of the British Society for the History of Science. He has given more than 50 public lectures on Darwin in more than a dozen countries. He lectures and broadcasts on Darwin, evolution, science and religion and the history of science around world. He also wrote The Darwin Experience, a biographical book about Charles Darwin.

I (and mostly Greg Mayer) have written about van Wyhe’s work before (see here, here, here and here).

About ten years ago I asked the noted Darwin scholar Janet Browne a question, which I recounted in this post:

I once had dinner with Janet Browne, author of what I think is the best biography of Darwin (it’s in two volumes; do read it!), and took the opportunity to ask her a question.  “If you had Darwin here at the table,” I said, “and could ask him one question, what would it be?”  Janet didn’t hesitate in her answer: “I’d like to know about the missing letter from Wallace.”

She was referring to a well known incident involving a famous letter. While Darwin was slowly preparing On the Origin of Species for publication, he received, supposedly on June 18, 1858, a letter from Alfred Russel Wallace.  And that letter contained an essay (written in Fr\ebruary of that year) outlining Wallace’s theory of evolution by natural selection, which of course was something Darwin had been ruminating about for years.  Wallace’s piece, “On the tendency of varieties to depart indefinitely from the original type,” has become known as the “Ternate” essay from the Indonesian island where it was supposedly penned, and you can find it here.

. . . Historians, mulling over this episode, found two problems.  First, the letter from Wallace to Darwin is missing among Darwin’s correspondence. Darwin slavishly saved all his correspondence, so why was this crucial document not in his collection?

Second, some historians have questioned whether Darwin really did receive the letter on June 18. Wallace had mailed some letters from Ternate on March 9, 1858, and these arrived in London on June 3. If Wallace’s letter to Darwin was in that same packet of mail, then why did it take until June 18 to reach Darwin? [JAC: Some have supposed that Darwin held onto the letter to either plagiarize Wallace’s ideas—a ridiculous notion given Darwin’s much earlier unpublished sketches about natural selection—or because he was dithering about what to do with a man who had hit on Darwin’s own theory of natural selection.]

John has answered both questions. First, Wallace’s letter wound up in the hands of geologist Charles Lyell, who simply lost it or disposed of it. (Lyell was notoriously lax about saving his correspondence.) And Wallace’s manuscript, enclosed with his letter, was sent to the printer, who simply discarded the precious document after setting it in type.

More important, a paper by van Wyhe and Kees Rookmaker (see here) showed that the letter arrived right on time in London, a day before Darwin got it in Downe. There was no chicanery, no evidence that Darwin held onto the letter before communicating it to his friends Hooker and Lyell.

I asked John the same question I asked Janet: “What would you ask Darwin were he here, and you had but one question?” John responded in roughly this way: “Darwin knew how life had evolved, and was the only one to understand this while the whole scientific world around him still dismissed evolution. I wanted to ask him- what was it like to be in that position?”

For although Darwin had shared his ideas with some of his scientific colleagues and friends (roughly 50 of them), none had fully accepted his ideas about evolution and natural selection until On the Origin of Species appeared in 1859. Yet Darwin had already accepted the truth of those ideas by 1838. For twenty years he kept a fantastic secret that was unknown to all his fellow humans.

Why did Darwin wait so long? John said that it was simply that documenting all the evidence for his theory took a long time, and that was the real reason, not that, as some say, Darwin was afraid of the public reaction to his ideas, or of the disapprobation by his religious wife.

John is known (some would say infamous) for asserting that A. R. Wallace’s contribution to what we know today as the theory of evolution would have been made without him, and that Darwin’s book was pivotal. The joint papers by Darwin and Wallace in 1858 made not a mark on science, and didn’t produce any acceptance of evolution. It was Darwin’s book, published a year later, that turned the tide—so much so that within a decade nearly all Englishmen accepted most of its ideas as true. (The hegemony of natural selection took a while longer, even into the 1900s.) While van Wyhe agrees that Wallace made an independent discovery of natural selection and contributions to the theory of evolution, Darwin made the most important contribution, and even Wallace’s work on biogeography was not incorporated into the two chapters on that topic in The Origin.

Did Darwin steal any of his ideas from Wallace? van Wyhe gives a firm “no” here, and I agree that that’s where the evidence points (see here). According to John, there has grown up since the 1960s a view that while Darwin might not have stolen Wallace’s ideas, Wallace simply wasn’t given proper credit for his work, perhaps because he was from a lower class (this myth is perpetuated by Tom Wolfe in his new book The Kingdom of Speech, who sees Wallace as the neglected, proletarian outsider whose contributions were ignored because of his social class.) van Wyhe says this is nonsense, claiming that Wallace doesn’t get the credit that Darwin did simply because Wallace didn’t put in the work—he never produced anything nearly as comprehensive or magisterial as The Origin. And behind all this may lie a modern tendency to elevate the supposed underdog, which of course would have begun in the 1960s.

I posed two more questions to John. First, had Wallace not lived at all, would our theory of evolution be any different, or would have the course of scientific history vis-à-vis evolution been very different? John said, “Not much.”

So what if Darwin had never lived? John argued that eventually we’d have the modern theory of evolution, but it would have arrived not only more slowly, but piecemeal, produced by the work of several or many naturalists, for nobody else would likely have written Darwin’s Big Book that changed the world.

I’m sure some readers will disagree here, but van Wyhe, who sees himself as a revisionist, but one who goes by the facts, does have substantial evidence to back up his claims about Wallace vs. Darwin—except for the “what if?” claims, which are of course speculative. I was impressed by him and his ideas, and wanted to recount them here.

John joined us at the zoo because he’d never seen an orangutan up close. He also said that Wallace shot 17 of them for specimens, and recovered one baby whose mother he’d killed. Wallace tried to raise the baby, but didn’t have the proper food, and it eventually expired.

Here are some of the orangs we saw: 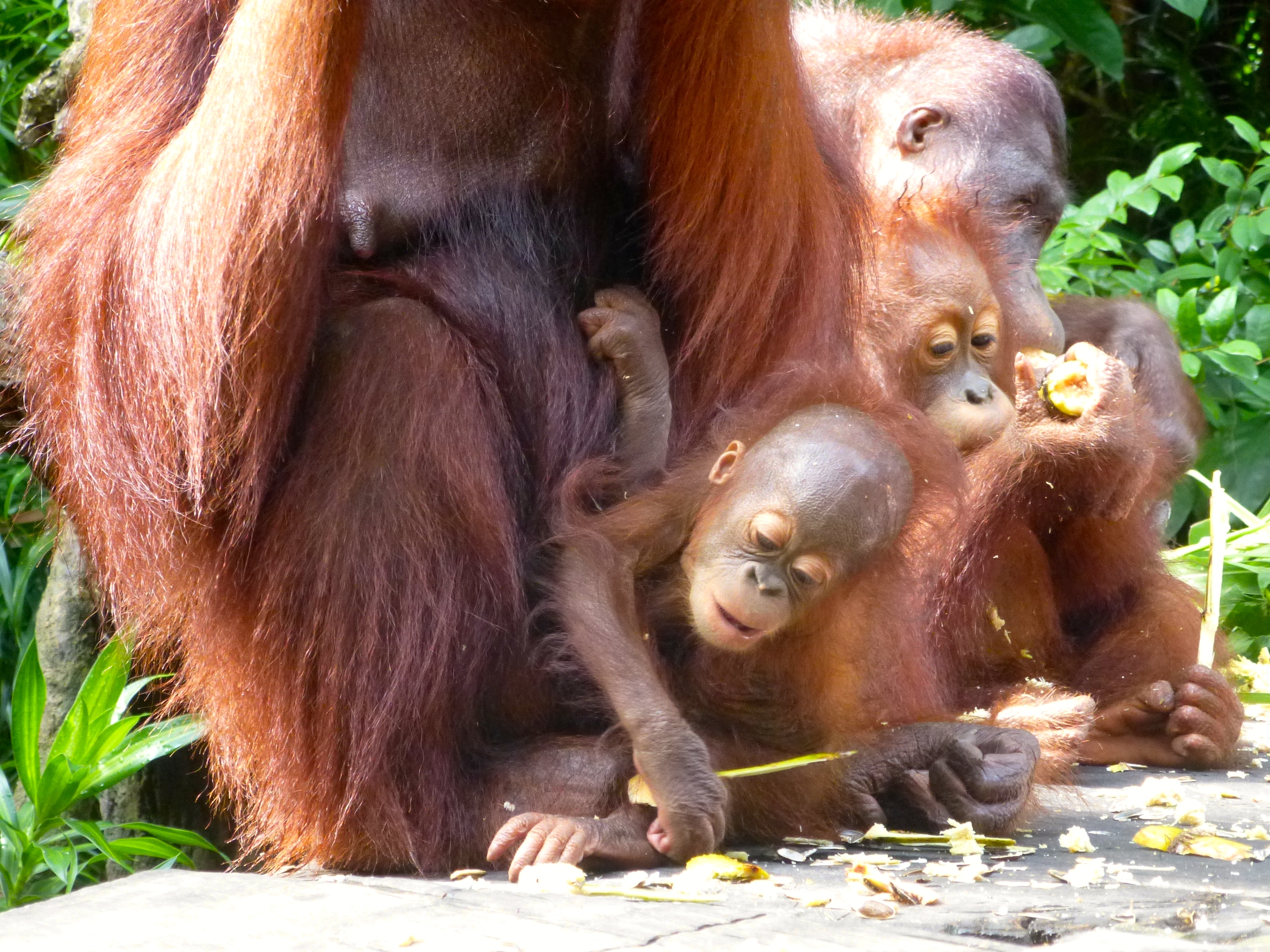 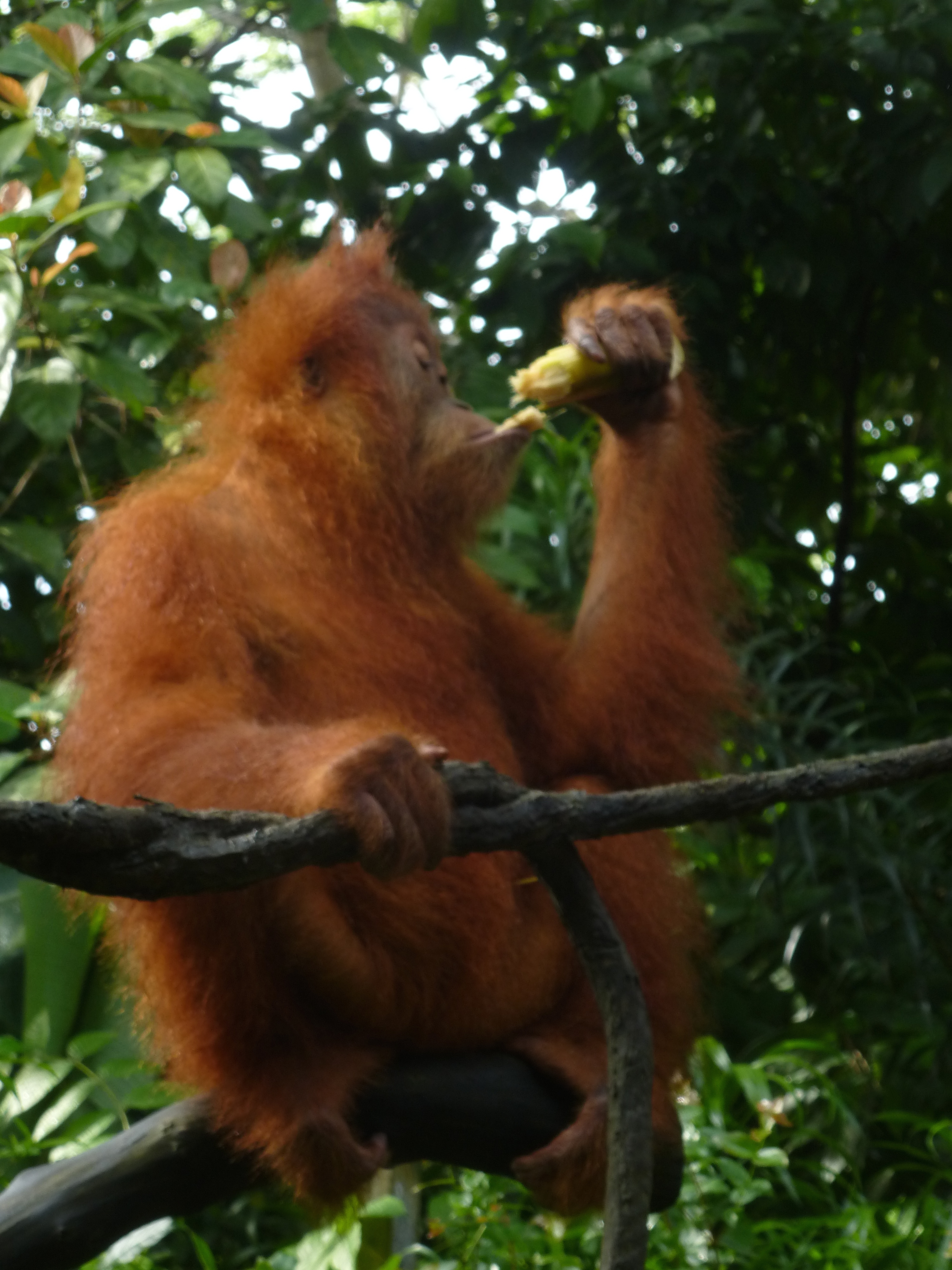 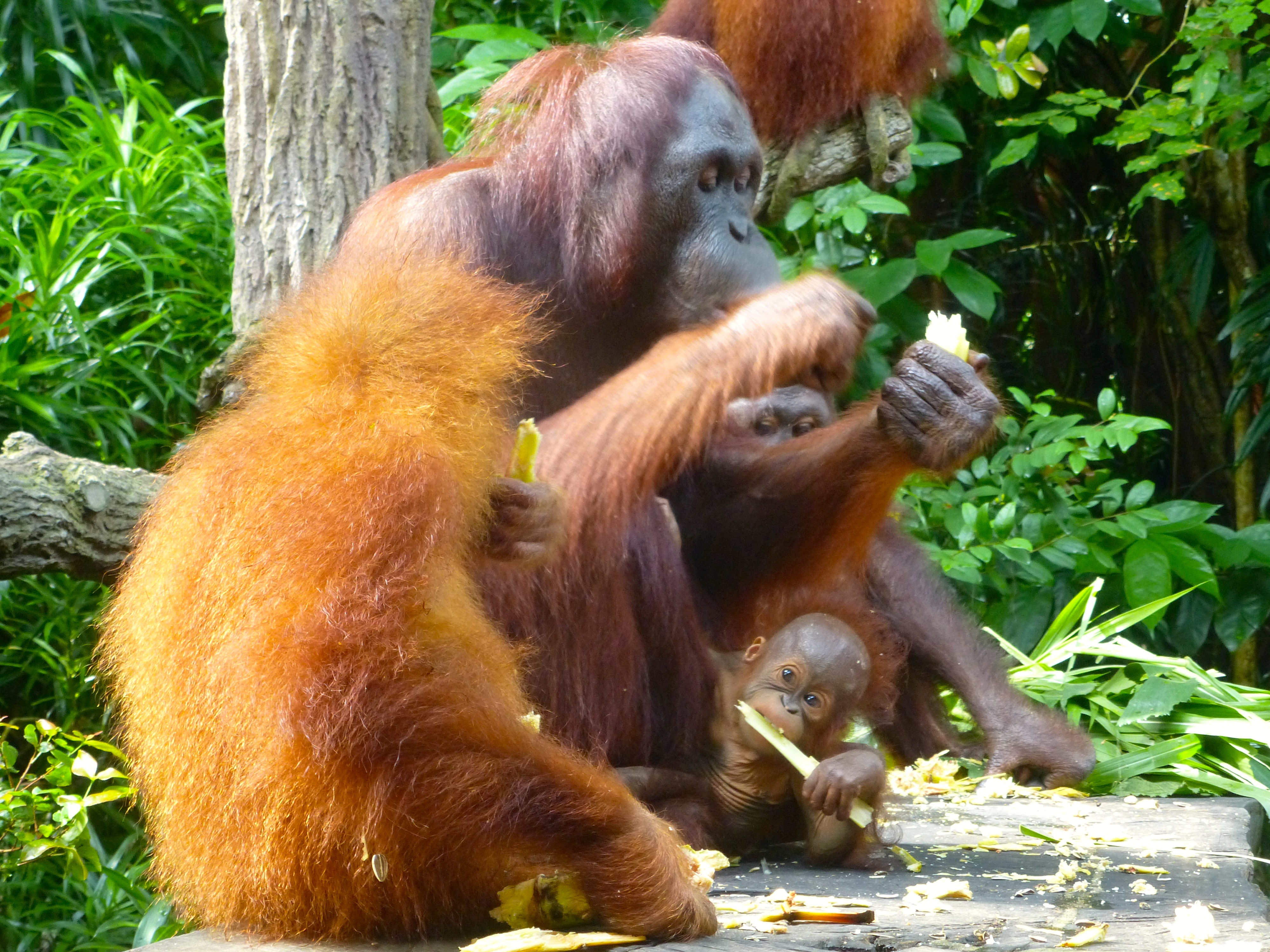