I’m not much of a jingoist: I don’t root for America in the Olympics, I don’t favor my home-town sports teams, and, although I like the University of Chicago, which has treated me very well, I don’t go around touting it as The Best School in the World.

But today I’m feeling quite proud to be here, for the U of C has just affirmed its commitment to free speech in a letter sent by the Dean to all incoming first-year students. So suck it up Oberlin, Harvard, Stanford, Berkeley, Amherst, Portland State, Yale, and all the other timorous schools that want to restrict speech. We’re better than you! We’re not going to cancel invitations to Ayaan Hirsi Ali; we’re not going to bow to protests about “culturally appropriated” food, and we’re not going to let students shout down speakers. In other words, we’re going to expect our students to act like adults rather than spoiled babies, and to learn to deal with opinions that differ from theirs. In short, we’re going to give them the opportunity to examine their views rather than simply buttress their preconceptions.

For a long time, the U of C has been a bastion of free speech, adhering strictly to the principles of untrammeled and open discourse. Those principles are encapsulated in a report produced in 2012 by a committee appointed by the President and headed by constitutional lawyer Geoff Stone. You can see the short version here (“Statement on principles of free expression“) and the full report here (“Report of the committee on free expression“). Here’s an excerpt from the shorter statement:

Fundamentally, however, the University is committed to the principle that it may not restrict debate or deliberation because the ideas put forth are thought to be offensive, unwise, immoral, or wrong-headed. It is for the members of the University community to make those judgments for themselves.

As a corollary to this commitment, members of the University community must also act in conformity with this principle. Although faculty, students and staff are free to criticize, contest and condemn the views expressed on campus, they may not obstruct, disrupt, or otherwise interfere with the freedom of others to express views they reject or even loathe.

For members of the University community, as for the University itself, the proper response to ideas they find offensive, unwarranted and dangerous is not interference, obstruction, or suppression. It is, instead, to engage in robust counter-speech that challenges the merits of those ideas and exposes them for what they are. To this end, the University has a solemn responsibility not only to promote a lively and fearless freedom of debate and deliberation, but also to protect that freedom when others attempt to restrict it.

In light of all the mishegas going on in colleges throughout the U.S., doesn’t that just curl the soles of your shoes? And the principles of the “statement” have served as a model for speech regulations in other schools; FIRE reports that at least 11 universities have modeled their regulations after Chicago’s.

But things have got even better. According to many sources, including Inside Higher Education and Intellectual Takeout, incoming first-year students at the U of C have received the letter below, written by the new Dean of Students John “Jay” Ellison.  It’s a no-nonsense affirmation of freedom of speech, intended to let the students know what to expect when they get here. It also points them to websites about free-expression policies and provides them with a monograph to read.

The most telling paragraph is the third, to wit:

Our commitment to academic freedom means that we do not support so-called trigger warnings, we do not cancel invited speakers because their topics might prove controversial and we do not condone the creation of intellectual safe spaces where individuals can retreat from ideas and perspectives at odds with their own.

You can imagine the huge smile that splayed across my face when I read that! We have had incidents in the past in which speakers were shouted down and forced to terminate their talks early, and I expect that the College will now do all it can to prevent that.

Anyway, good for the U of C, and kudos to Dean Ellison for standing up for principle in his letter. Read and smile! 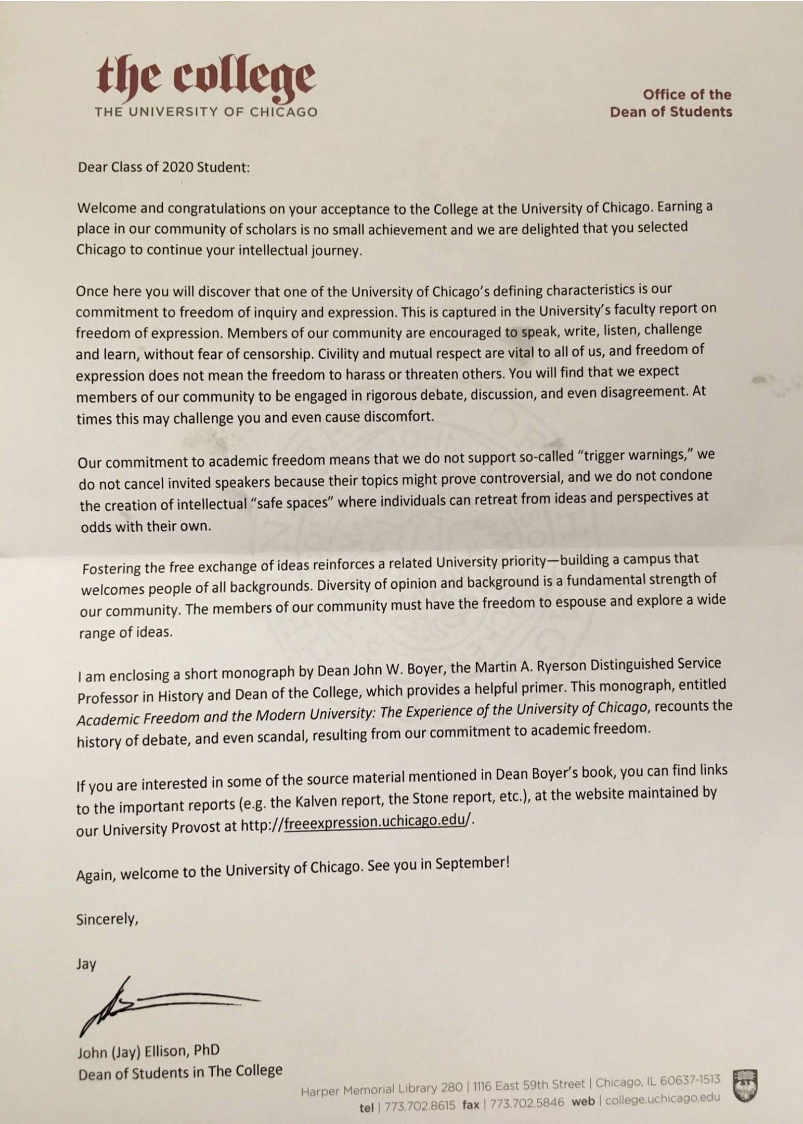