The story of our relationship with the Greater Honeyguide, which has the fantastic species name of Indicator indicator, is well known. The BBC had a segment on it, which is where I learned the story. And the story is this: people in Mozambique and Tanzania use honey as an important part of their diet, but the beehives, hidden in trees, are hard to find. Enter the Honeyguide, a bird that has the ability to find the nests. This has led, over God knows how many years, to a mutualism between bird and humans. The birds let humans know they’re around by chirping. The honey-hunting humans then make a special bird-summoning sound (in the case of the Yao people, the “brrr-hmm” call you can hear in the video below, but the Hadza people of Tanzania use a different “whistle” call), and that attracts the birds, which then lead the humans to a bees’ nest. As the birds fly ahead, the humans keep making that call, which keeps them aligned with the birds. Finally, the bird stops in the nest area, and, more often than not, the humans find the nest, extracting the honey and most of the honeycomb. The humans leave behind wax (and perhaps some honey) for the birds, which consume it.

So we have here a true mutualism, a wonderful alliance of bird and human that benefits each one. My question, when I first heard the tale, was also asked by a group of biologists: Is is this story true? That is, you can see humans following birds to the bees’ nests, and you can see the humans making calls, but do the human calls—the specific whistle or “brrrr-hmm” they make—really serve to attract the birds and keep them guiding? And are the birds accurate in leading humans to the nests? Finally, are the Honeyguides really leading humans, or are the humans just following a bird, parasitizing its own ability to find a nest?

The classical story does seem accurate, as without humans the birds have no way of getting either wax or honey. They can’t attack bees’ nests on their own. Further, the birds do seem to come to human calls, and no other species has been recorded following the birds. But the scientists wanted to know more; and this has produced a new paper in Science by Claire Spottiswoode, Keith Begg, and Colleen Begg (free link and reference at bottom). It turns out that the story is indeed true.

The video below, produced to accompany the paper, really gives all the salient details, but I’ll add a few more after you watch it:

The authors had two questions:

1). Does the guiding behavior give reliable information to humans about where the bees are?  The answer is yes: 75.3% of guiding events led to successful location of a bees’ nest (the bee, by the way, is almost always Apis mellifera, the common honey bee).  The average distance of a following event was 152 meters from when the bird showed up, and about 75% of nests found by humans involved following a bird.

The authors also used a GPS to track the direction of a bird’s initial travel to see how accurately it showed where the nest was. On the right part of the figure below, you can see that the birds are damn good; on average, their initial direction of flight was only 1.7° away from the true direction of the nest. Those birds know where the nests are!

2). Does the specific human call really incite the birds to guide the people to bees’ nests?  Again the answer is “yes.” The researchers did an experiment in which they recorded three types of calls by the Yao. These included the normal “brrrr-hmmm” call, a control “human sound” call which was the Yao word for “honeyguide,” “honey,” or the caller’s name (alternated), and an excitement call of a ring-necked dove, serving as an animal-call control. These recordings were then played back on 72 forays into the field. The results were clear, and are shown in the figure below.

On the left side (A), you see the probability of being guided by a honeyguide when different calls were played. The “brrrr-hmmm” call, the one used in everyday life, elicited a guiding attempt 66.7% of the time, as opposed to only 25% or 33.3% of the time when human-sound or dove-sound calls were used, respectively. (The difference between the results of traditional versus other two calls was significant, as shown by the p = 0.003 notation.) When the traditional call was interrupted by playing the other two calls, the authors report that the honeybirds “ceased guiding.” They’re clearly listening to the brrr-hmmm to keep them heading toward the nest.

On the right side (B), you see the same comparison for whether the birds successfully led humans to a nest after they had been following it (the time for finding was limited to 15 minutes after arrival at the general area). And again, the recorded brrr-hmmm call led to finding a nest 54.2% of the time, as opposed to only 16.7% for each of the other two recorded calls, another highly significant difference. Clearly, the traditional call is better at inciting birds to guide.

One potential problem: maybe the birds simply are more likely to hear the traditional call than the other two calls, but don’t recognize the traditional call as a specific call saying “please guide me.” To test this, the authors showed that the amplitude of the call—its “hearability” had no effect on either the probability of being guided or being “shown” a bees’ nest.

The mutualism between a wild animal and humans is almost unique, for the authors note only one comparable situation:

These results show that a wild animal correctly attaches meaning and responds appropriately to a human signal of recruitment toward cooperative foraging, a behavior previously associated with only domestic animals, such as dogs. Although humans use many species as foraging partners, including falcons, dogs, and cormorants, these involve trained or domesticated individuals that are specifically taught to cooperate. The honeyguide-human relationship is notable in that it involves free-living wild animals whose interactions with humans have probably evolved through natural selection. To our knowledge, the only comparable relationship involves cooperation between artisanal fishermen and free-living dolphins. Several reports exist of men “calling” dolphins to hunt, starting with Pliny the Elder around 70 CE . Whether this reflects a similarly specialized communication system to that mediating the honeyguide-human mutualism in Mozambique remains unknown.

The question that interests me now is this: How did it evolve, and is the behavior on the part of the birds genetically-hard wired, learned (from either other birds or their own experience), or a combination of both? It’s relevant here that Greater Honeyguides are nest parasites: parents lay their eggs in the nests of other species, who raise them, and so parents never interact with their young. (This is what the cuckoo does.) That means that if learning is involved, the birds can’t be learning the human call from their parents.  The authors float the idea that the recognition is innate, but then point out that in Tanzania the honeyguides respond to a different call. That’s unlikely to be a different genetic adaptation, they say, because there’s no evidence of genetic structure for other loci across the range.  They conclude that recognition of the call is learned, perhaps from other adults in the area. This would imply that they watch other birds and, seeing the reward for the behavior, copy them. This copying could include the initial call that the birds make, alerting humans to their presence.

There is, however, another possibility: the birds are hard-wired for the ability to learn a human call, but the specific call they learn is provided by the local people. This may be the case, for instance, in human language. Some think that we’re “hard wired” to acquire language (we start babbling syllables as infants, and are more attuned to speech sounds than to non-speech sounds), but the specific language we learn is determined by our local culture.  The way to determine this, in the case of the honeyguides, is to somehow hand-rear the babies and then see if, when released, they spontaneously recognize the “brrr-hmmm” or “whistle” call, or can be trained to lead when hearing either call before they’ve seen other birds. (It’s still possible that there’s genetically distinct recognition in different areas, but that other genes don’t show the same kind of geographic differentiation).

Even if the behavior is learned, that leaves one more question: How did this system get started? Your guess is as good as mine, and the authors don’t talk about this.  Given that birds can’t acquire honey or wax on their own, it probably started when birds saw humans find a bees’ nest, and those humans left behind some edible remnants of the nest. The birds would then start following the hunters around, and could even go to the bees’ nest anticipating where the hunters were going. The hunters could then use the birds’ behavior as a way of locating the nest (birds are better at finding nests than are humans), and could start calling to the birds. That would alert the birds to the presence of humans, and thus to a treat.  That scenario implies that even if recognizing a specific human call isn’t hard-wired, perhaps the leading behavior could have evolved, for there is obvious reproductive benefit (by way of more food) to leading humans. The video above suggests that this relationship could have existed for thousands of years or more, which is ample time for some evolution to have occurred in the bird.

But however this evolved, I find it ineffably touching. Look at the picture of the Yao man and the bird above. They help each other out, and, of course, the Yao always leave some food behind for the bird. That’s not just kindness: it’s a necessity if this behavior is to remain stable. Still, it’s hard not to think that the Yao bear some sort of affection for the birds, and maybe there’s just a wee bit of bonding on the bird’s part. Ain’t nature wonderful? 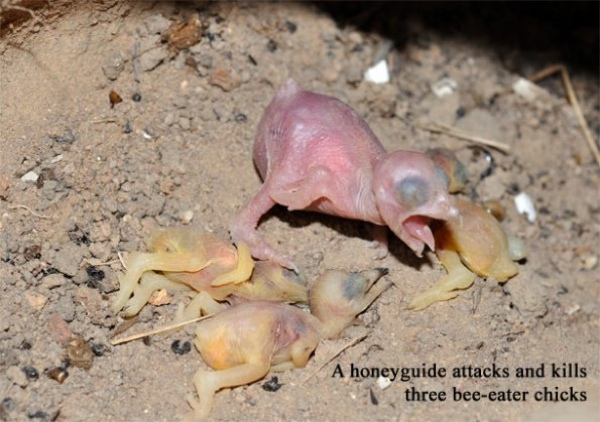 Now, about those fishing dolphins. . .

50 thoughts on “Honeyguides and humans: a wonderful mutualism between our species and a wild bird”