As 90-year-old Razie notes in this entertaining documentary, “Bacon & God’s Wrath”, her deconversion from Judaism began with her foray onto the Internet, seeking recipes. When she began typing things into the Google search box, the Big Changes Began. (See the video by clicking the screenshot below, which takes you to a New Yorker piece containing the whole 9-minute film and some commentary.) Razie explains:

“That feeling of connectedness. . .i t was more than I ever got from going to synagogue! Well, as you can imagine, it was the first step on a slippery slope, and I went very quickly from Julia Childs [sic] to Christopher Hitchens. It soon became very difficult for me to believe such incredible nonsense any more.”

Chalk up another convert for the Hitch, despite his so-called stridency. She continues:

“What you’re filming now. . .is a symbolic advancement of reason over faith. Now and then I hear people say that it takes courage to be faithful! But there’s nothing courageous about it. Faith is belief without evidence. It comes from Iron Age superstitions: our fear of the dark. But we know better now. It’s courageous to choose the truth, even if it means abandoning what you know.”

Later in the film, Razie converses with a pig’s head (below) and, in a symbolic gesture of freedom at the end, tries bacon for the first time in her life (click below). Her reaction is amusing. 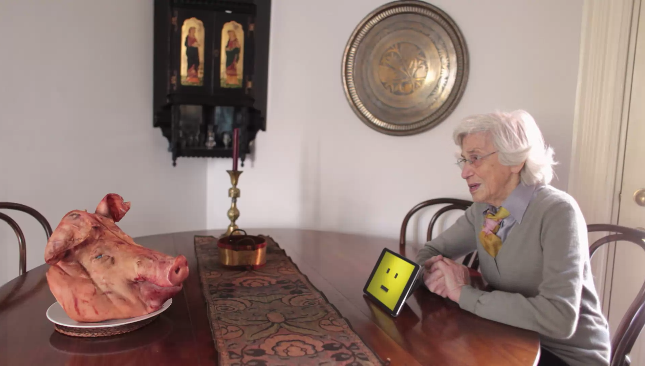 UPDATE: I’m sorry some viewers couldn’t see the New Yorker embed. But I’ve now found it on YouTube, so everyone should be able to see it:

The documentary is by the Canadian filmmaker Sol Friedman, and the short New Yorker essay about the film is by Joshua Rothman, himself an atheist. Sadly, Rothman’s take on the movie undercuts its message, but what else do you expect from the faith-coddling New Yorker?:

. . . the title also contains, at least for me, a hint of sadness. Religious faith is a consolation; if you trade it in for bacon, have you made a good trade? I’m an atheist, and I think I would give up bacon in exchange for the conviction that the universe has a purpose. Razie, of course, hasn’t traded belief for bacon; she has traded it for the freedom to follow her own conscience, to do and think as she sees fit. These, the film seems to say, are the signs by which we communicate, to others and ourselves, our ideas about the fundamental questions of existence. Look how small they are!

I wouldn’t give up bacon, or nonbelief, for some phony conviction; the fact is that there’s not a scintilla of evidence that the Universe has a purpose. “Purpose,” of course, implies a Planning Mind, and what Rothman expresses is what many believers would like athiests to feel: a profound sense of loss at not having a god. But Razie has no sense of loss, just an ebullience at embracing the truth, combined with a lingering feeling that she just may have lost Pascal’s Wager. But she forges ahead bravely, showing us that it’s never too late to embrace reason.

50 thoughts on ““It’s courageous to choose the truth, even if it means abandoning what you know”: a Jewish woman becomes an atheist at ninety”