I’m busy today, but wanted to call attention to a new Pew survey, “America’s changing religious landscape”, which gives some good news to atheists and anti-theists. (The report’s summary is here, and the full pdf is here.)

The upshot: the proportions of Christians, Catholics, and Protestants in the U.S. are falling, while the proportion of “nones” (those not formally affiliated with a church, which includes unaffiliated God-believers, “spiritual” people, atheists, and agnostics) is rising—and rising rapidly. Have a gander at the data from 2007-2014.

You can see that, lest we worry that other faiths are filling the lacuna of departed Christians, that’s not the case: non-Christians went up only 1.2%, while the unaffiliated rose by 6.7%. Here’s Pew’s summary, which doesn’t add much but I thought I’d put it in for those who like words more than plots:

But the major new survey of more than 35,000 Americans by the Pew Research Center finds that the percentage of adults (ages 18 and older) who describe themselves as Christians has dropped by nearly eight percentage points in just seven years, from 78.4% in an equally massive Pew Research survey in 2007 to 70.6% in 2014. Over the same period, the percentage of Americans who are religiously unaffiliated – describing themselves as atheist, agnostic or “nothing in particular” – has jumped more than six points, from 16.1% to 22.8%. And the share of Americans who identify with non-Christian faiths also has inched up, rising 1.2 percentage points, from 4.7% in 2007 to 5.9% in 2014. Growth has been especially great among Muslims and Hindus, albeit from a very low base.

Here’s a breakdown by religion. “Outlier” forms of Christianity, like Mormons and Jehovah’s Witnesses, seem to be holding steady, but constitute only a very small proportion of the population. Muslims have nearly doubled their proportion, though it’s low, and Hindus have shown a modest increase. This is probably due to either immigration or higher birthrates: 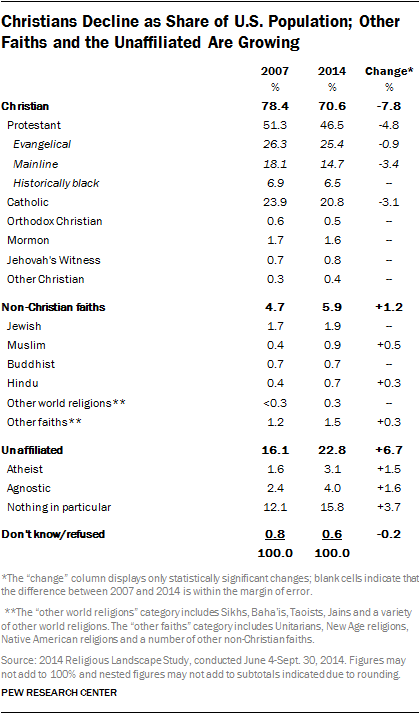 Now the data are in terms of percentages, but the population is growing, so percentages don’t translate directly into numbers. For example, though Evangelical Protestants have dropped 0.9% in proportion, their numbers have risen from 59.8 million to 62.2 million. But don’t worry, folks, for I think what matters is the proportion. And if you look at the number of “nones”, it has risen drastically. 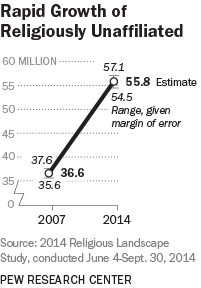 Finally, what about those “nones”? The data show that the increase in the unaffiliated is higher in the older age groups, but it’s gone up in all of them. 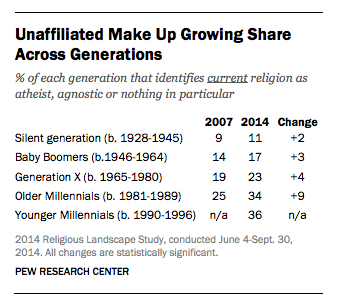 And Pew’s analysis of how the proportion of atheists and agnostics among is rising. Atheists are still only 3.1%, but if you add agnostics it’s 7.1%, and I bet a lot of the other nones, especially the “spiritual” ones, have beliefs that aren’t harmful to society. Pew:

For those who say, “American will always be a religious country”, my response is, “I wouldn’t bet on it.”

49 thoughts on “Christianity continues its decline in the US, unbelievers and the non-affiliated increase”