One of the disadvantages of shopping for food early Sunday morning is that Krista Tippett’s “On Being” program is on National Public Radio at 7 a.m. And, of course, I have to listen, cursing to myself for an entire hour. Why do I do it, you ask? I could say that I need to keep my finger on the pulse of America, and that’s one reason, but it also serves as an Orwellian Sixty Minutes of Hate. (“Hate” is too strong; I think that Tippett and her followers are pitiable, though she’s very well compensated.)

Today’s show, actually, wasn’t so bad (I heard only about 40 minutes), as it featured a man who resisted all attempts to couch his thoughts as woo: Frank Wilczek, an MIT professor who, along with David Gross and H. D. Politzer, won the Nobel Prize in Physics in 2004 for work on the strong interaction.  Tippett being Tippett, the topic, of course, wasn’t really physics per se but, as you can see from the show’s title (“Why is the World So Beautiful?“), the “spiritual.” Wilczek has also written several popular books (I haven’t read them), one with the unfortunate title of A Beautiful Question: Finding Nature’s Deep Design. I doubt that it’s teleological or osculates faith, but I wouldn’t have used the word “design”, which of course implies a Designer.

At any rate, Wilczek tackled an interesting topic: the beauty of mathematics and how well “beautiful and simple equations” describe the structure of the cosmos through physical laws. Why are such simple and “beautiful” theories so useful in describing the laws of physics? The wonder that Wilczek evinced resembled that expressed by Eugene Wigner in his famous 1960 paper, “The unreasonable effectiveness of mathematics in the natural sciences.” Here’s a quote from that paper:

It is difficult to avoid the impression that a miracle confronts us here, quite comparable in its striking nature to the miracle that the human mind can string a thousand arguments together without getting itself into contradictions or to the two miracles of the existence of laws of nature and of the human mind’s capacity to divine them. The observation which comes closest to an explanation for the mathematical concepts’ cropping up in physics which I know is Einstein’s statement that the only physical theories which we are willing to accept are the beautiful ones.

I doubt that most physicists would consider this a “miracle” (Wilczek didn’t come close to using that word); and, as I discuss in Faith versus Fact, there are anthropic reasons for the laws of physics being constant rather than variable (our bodies wouldn’t function, and no organism could evolve, if the laws varied wildly), as well as for mathematics being able to describe the laws of physics.

This leaves two questions: why are the laws of physics described with such simple—and, to physicists, beautiful—equations? And why, as Wilczek maintained, has beauty served physicists so well as a guide to truth? In fact, at one point Wilczek said that, when deriving an equation to explain physical phenomena, “It was so beautiful that I knew it had to be true.”

As a working (or ex-working) scientist, I recoil at such statements. To me, beauty cannot be evidence of truth, though it may be a guide to truth. If so, how does that work? But I even wonder how often mathematical beauty itself, which, after all, doesn’t come out of thin air but builds on previous equations known to describe reality, guides the search for truth completely independent of empiricism.  I’m not qualified to answer that question, nor the questions of whether even more beautiful equations could be wrong, or whether it’s all that surprising that the effectiveness of math in describing physics is “unreasonable.”

Of course Tippett tried to turn all this toward spirituality, and at one point asked Wilczek if this beauty was evidence for Something Bigger Out There that others have called God, but he batted away the question. The woman tries to force everything into her Procrustean Bed of Spirituality. But leaving that aside, I have three questions for readers to ponder, and—especially for readers with expertise in math and physics—to give their take in the comments:

By the way, at the end of the show, Tippett announced the major donors to the show, and the first of these was—surprise!—the John Templeton Foundation (JTF). I hadn’t heard that before, and the JTF isn’t listed among the “funding partners” on the show’s main page:

But if you search her site you can see the funder of several episodes, and Tippett’s connection with Templeton (she asked the JTF for, and was given, nearly $600,000 to fund nine episodes of “On Being”). 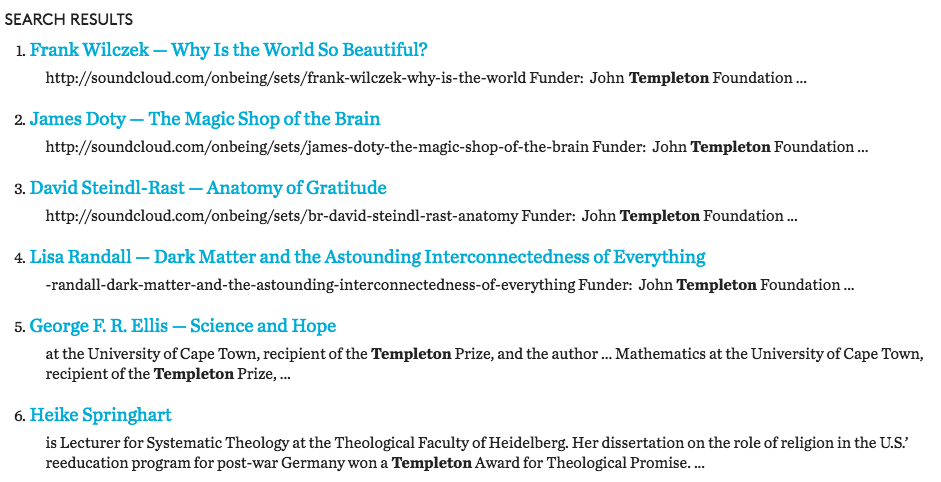 There would be every reason, of course, for the JTF to sponsor a show that tries to connect science with something “deep”. Further, the blurb for the show on Google, below, jibes very well with Templeton’s aims, for both deal with the Big Questions: 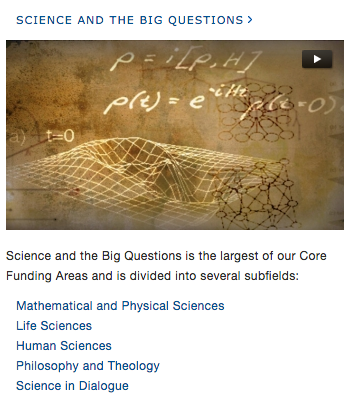 The “Big Questions” are usually those that have no satisfactory answer, like “What does it mean to be human?” or “Why are equations describing the world so beautiful?”, but they serve to reassure the public that science, as Sir John Templeton asserted, could point us to the divine. That was the explicit aim of the millions left by Sir John to the JTF.

Templeton and Tippett—a match made in Heaven!

124 thoughts on “Does the beauty and effectiveness of math in understanding the world prove anything?”