Denis Alexander wrote a review of Faith versus Fact in the January 22nd Times Literary Supplement (TLS), and, to say the least, it wasn’t kind. But given his position as an evangelical Christian and the emeritus head of the Templeton-founded-and-funded Faraday Institute for Science and Religion, given his criticism of evolution as an “atheistic theory,” and given my repeated criticisms of his religious views on this site, to which he’s responded, I didn’t expect anything else. (Given his position and our history, though, I am surprised that the TLS religion editor chose him.)

I can’t link to his review as the TLS doesn’t have a free website, and I won’t really reply to it, as I adhere to Nick Cohen and Stephen Fry’s advice to never answer critics. But I’ll let someone respond: our own Matthew Cobb.

After reading Alexander’s piece claiming that my book was the most “consistently scientistic” book he’s read in a long time, and that there is indeed falsifiable evidence for religious claims (Alexander uses the Resurrection as an example), so that there are indeed religious “ways of knowing”, Matthew (unknown to me) wrote a letter to the TLS:

In Denis Alexander’s review of “Faith vs Fact” (22 January 2016), my friend Jerry Coyne’s claim that theology provides no ‘real knowledge’ is dismissed as a ‘scientistic raid’. I wonder if Dr Alexander, or indeed any reader, could provide an example of knowledge gained through theology, and above all tell us how they know that knowledge is true?

In the next issue, Alexander responded, as well as another believer, and Matthew kindly transcribed the letters for me. First, Alexander’s (why are all the letters titled “Sir”? Are there no women at the TLS?):

Prof. Matthew Cobb enquires as to how knowledge is gained through theology. I am, like Prof. Cobb, a scientist, but I am happy to pass on what I infer through observation of theologians in their academic discipline here in Cambridge.

There are three types of theological enquiry. The first relates to reflection on the properties of the universe, a procedure known as ‘natural theology’. Inference to the best explanation points to a creative Mind underlying features of the universe such as its anthropic fine-tuning, its intelligibility (without which science cannot even get going), the mathematical elegance displayed in the properties of matter and energy, and the emergence of human minds by an evolutionary process that can gain some understanding of these properties. Theological knowledge here refers to interpretation not to description, but the scientific enterprise likewise involves much interpretation of data, so there are some interesting parallels, remembering of course that there are many ways of ‘knowing’.

Second, theological enquiry, at least within the Abrahamic faiths, involves historical enquiry and interpretation of their Scriptures. Christian theology includes textual analysis and study of the historicity of Jesus of Nazareth. For example, the belief of the early church in the resurrection of Christ, had it not occurred, could readily have been refuted by the discovery of the embalmed body of Christ in a Jerusalem tomb, easily recognisable by his family and disciples. The Apostle Paul clearly stated that his faith (and that of other Christians) was a waste of time if the resurrection had not occurred. Clearly we do not now have access to the data in the same way as the first century Christians, but again there are some interesting parallels here with scientific enquiry. The principle of refutation can apply (in some cases) to history as well as to science.

Third, theology (which means ‘knowledge of God’) also investigates religious experience, a widespread human trait. In the Christian tradition, knowledge of God is practiced through prayer, meditation, reflection, communal worship and, in some cases, ecstatic experience. There is no particular reason why personal knowledge of God should not be included as an important ‘way of knowing’.

Some scientists (I suspect a small minority) believe that the natural sciences provide the only reliable form of human knowledge. I suggest that this leads to an impoverishment of the human spirit.

I will say one thing: I’m greatly amused by the scientific-ish evidence Alexander adduces for the Resurrection. Since we don’t have the embalmed body of Christ, Jesus must have risen! Think about that: Alexander’s “principle of refutation.”

UPDATE: Reader Pliny the in Between responded to Alexander’s new scientific principle with this cartoon on his/her website Evolving Perspectives: 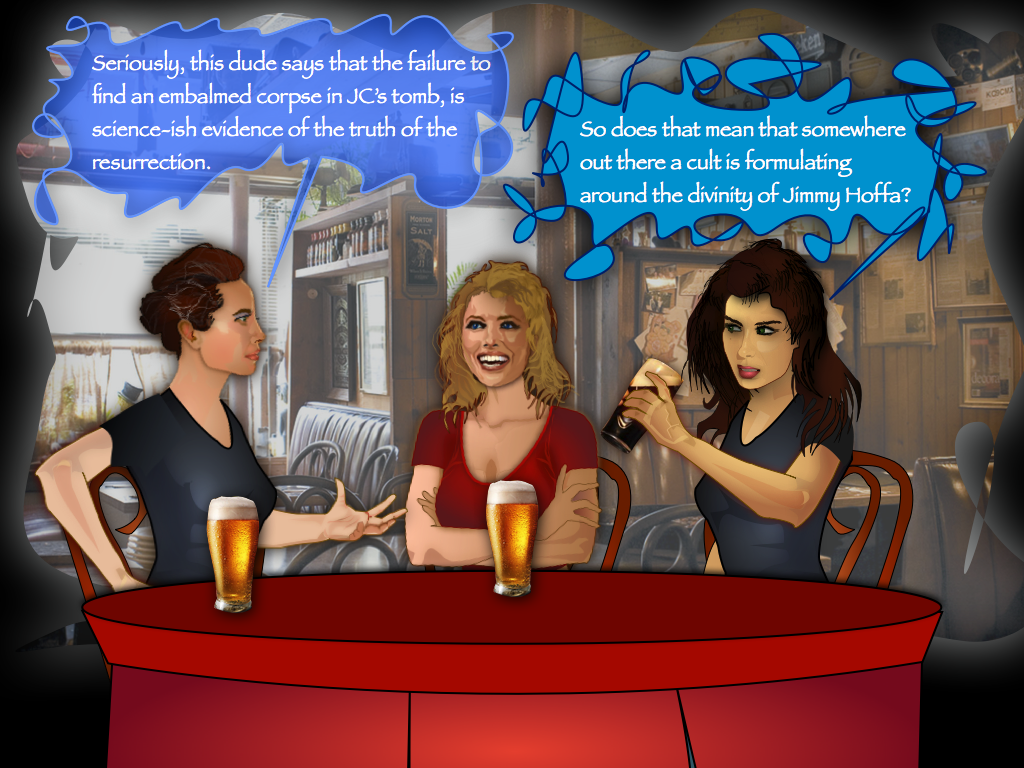 My spirit must be impoverished. . .

There’s one other letter, too—from a pastor:

In response to Matthew Cobb (Letters 29th Jan): Medical skill and science brought me through cardiac arrest and major surgery, yet in themselves offer nothing to live for. Theological language – passion, faith, hope, love, grace, glory – addresses why it is worth being alive. The truth of value-knowledge is lived, not “known”. It enables one to be deeply grateful and to appreciate the wonder of factual knowledge.

Clearly religion offers us the only way to see why life’s worth living!

My formal response to these two letters is thus this:  “Oy! And double oy!”