This incident was reported on January 26 by the Godless Spellchecker: the head teacher of a British faith school, one Christina Wilkinson of St. Andrews Church of England School in Lancashire, pushed back against another teacher (Tom Sherrington), who had earlier posted his support of evolution.

Below is Wilkinson’s tw**t that caused all the trouble (note that her handle is “WilkinsonHead”, which gives a bit of official imprimatur to her claim; Sherrington’s—”headguruteacher”—is similar).

The Godless Spellchecker (may the peace of Ceiling Cat be on him) wrote an open letter to St Andrew’s Primary School, politely calling attention to the problem and offering to help finance a visit of the students to London’s Natural History Museum to see the evidence for evolution. I joined in a bit, directing my first ever to-a-person tw**t to Ms. Wilkinson, offering to send her a copy of Why Evolution is True (I never got a response, and I don’t think Spellchecker did, either).

Now today’s Guardian continues the story, reporting the criticism of Wilkinson on Twi**er:

A primary school headteacher has been mocked on Twitter after claiming that evolution was “a theory” and there was “more evidence that the Bible is true”.

. . . Amid criticism and calls for her to resign on Twitter, Wilkinson issued a statement saying: “I’d like to make it clear that we teach the full national curriculum in school and that our pupils receive a fully rounded education.”

Since Wilkinson’s account is closed, I can’t look at the responses on Twi**er, but mine was polite, and others, while perhaps less polite, were within the bounds of critical discourse (i.e., a minimum of name-calling and no threats):

Wilkinson’s assertion was met with scorn on the social media site. One person suggested she retrain as a vicar, while another said: “That’s an unacceptable level of stupidity from a headteacher.”

Liv Boeree tweeted: “This is horrifying. I’m still holding out hope her response is some kind of performance art. Pls pls pls tell me this lady doesn’t work in education. Please.”

Sherrington wrote: “Sigh. I sincerely hope your students aren’t told that. Take them to a natural history museum.”

His original posts, which sparked the exchange, had read: “For me, it is critical that teachers do not water down the science to accommodate religious perspectives if that means sacrificing the acceptance of evidence.

“This applies to science and RE teachers. New Earth creationism and more subtle variants of Intelligent Design are a denial of science and I think all teachers need to be conscious of that.”

Richard Dawkins and others have corrected Wilkinson on the meaning of the word “theory” in science (a perennial task), and of course she’s dead wrong about the evidence supporting evolution vs. the “truth claims” of the Bible.  Nevertheless, there are those who still offer a weak defense of Wilkinson’s views, including a Labour MP!:

Graham Jones, Labour MP for Hyndburn, whose constituency includes Wilkinson’s school, said: “It’s a Church of England school and it will, of course, teach the Bible. But it should also teach the children about other religions and beliefs.

“The national curriculum requires a more broad-based perception of evolution and a balance of opinions has to be struck so pupils can make up their own minds.”

That’s ridiculous. British law requires that there be no teaching of creationism in science classes, with the warning that a violation could lead to withdrawal of government funding. I’m opposed to government-funded faith schools of any stripe, and am still amazed that Britain has them, but there should be no teaching of creationism as science in any class, including religion classes. You can say, I suppose, that “some Christians believe this” in religion class, but that itself is misleading, as it may signal approval.

And Jones’s statement that there should be a “balance of opinions” so that “pupils can make up their own minds” is completely off the mark. We’re not talking about opinions but facts, and to allow the presentation of every opinion about the origin and diversity of organisms is sure to confuse rather than enlighten students. You might as well teach alchemy in chemistry class and faith-healing in health class, and let the students make up their own minds. Some British reporter ought to query Jones about what he means.

At any rate, there should be an investigation of what is being taught in the science classes at St. Andrews School, and a fix to assure it’s conforming to government standards. Wilkinson should not be threatened with losing her job unless it was shown that she was teaching creationism in science class or allowing others to do so—and even then I think that firing is too draconian a punishment. Just ensure that she doesn’t promulgate creationism in school. If she wishes to do so on her own Twi**er account, preferably not identifying herself as a “head teacher,” well, she’s free to privately disseminate her misguided views about biology and the Bible.

The one heartening thing about the whole affair, at least for Britain, is that such a tw**t by a teacher wouldn’t cause a social media storm in the U.S.; indeed, such a teacher might be seen as a hero in certain parts of the country.

Here are a few responses, pro and con, to the Guardian article about Wilkinson: 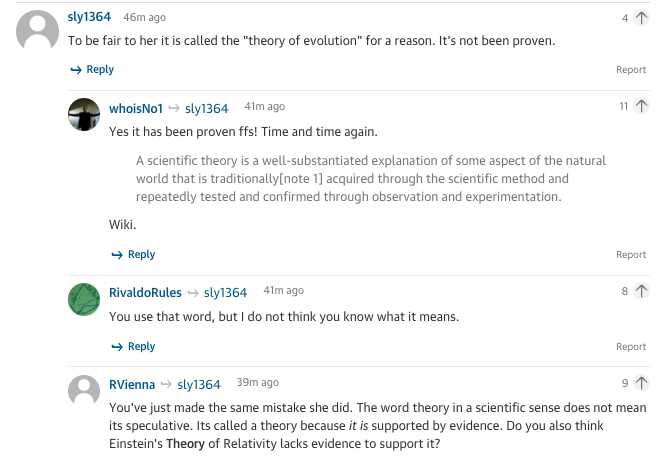 This is why the Guardian shouldn’t ban comments on some controversial issues, as it seems to be doing. The comments section often affords an enlightening look at what people think about the topic at hand.