The New York Times editorial staff continues its relentless campaign to osculate faith—all faiths in the case of Nicholas Kristof’s Sunday op-ed piece, “How well do you know religion?” In his tendentious essay, he first offers a quiz designed to show that the Bible is full of bad stuff while the Qur’an has some good stuff. His aim is to show that despite the sometimes scary contents of the Qur’an, it’s no worse than the Bible, and the violent content of scripture doesn’t matter anyway. 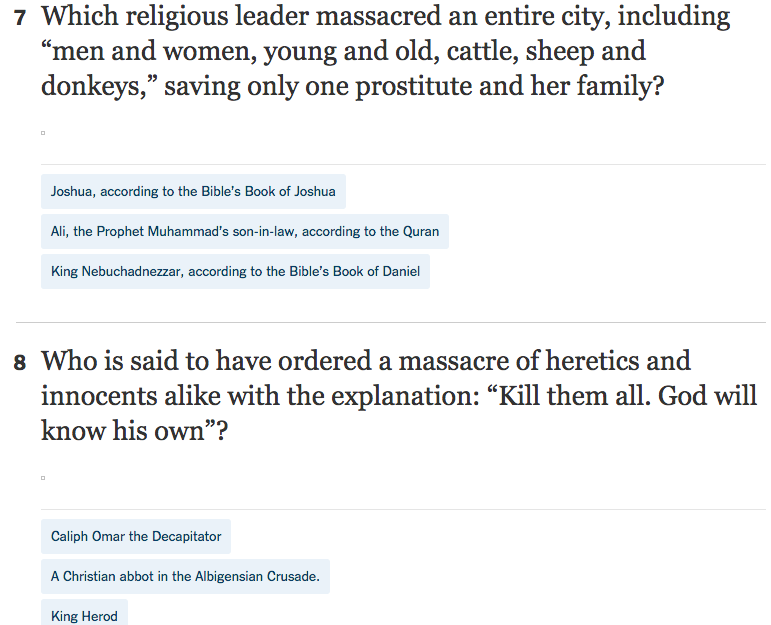 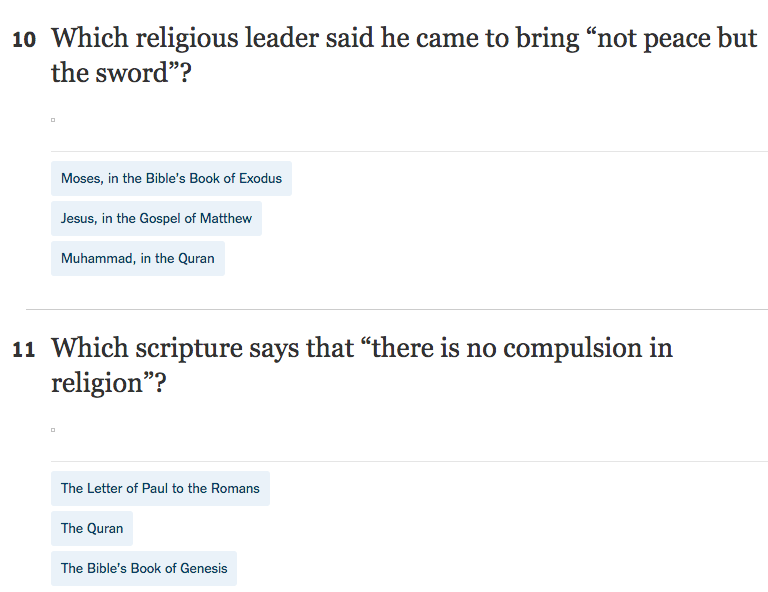 As you might expect, the source of nice scripture (5 and 11) is the Qur’an, while the rest of the Questions have answers from Christianity or the Old and New Testaments. Kristof admits cherry-picking, but that, he says, is precisely his point:

Some of you are probably angrily objecting right now that I am cherry-picking texts. Yes, I am. My point is that faith is complicated, and that we’re more likely to perceive peril and incitement in someone else’s scripture than in our own.

In fact, religion is invariably a tangle of contradictory teachings — in the Bible, the difference between the harshness of Deuteronomy and the warmth of Isaiah or Luke is striking — and it’s always easy to perceive something threatening in another tradition. Yet analysts who have tallied the number of violent or cruel passages in the Quran and the Bible count more than twice as many in the Bible.

Well, Kristof’s right in that Christians are more scared of the bad stuff in Muslim than in Christian scripture, but Christianity has largely divested itself of its bad scripture over the ages by ignoring it. Islam, however, hasn’t done the same de-fanging: while the vast bulk of Muslims aren’t inspired to violence by the malevolence of the Qur’an, the majority in all Muslim countries read the Qur’an as literal truth. The faithful haven’t yet found a way to ignore the bad bits of the Qur’an, though I hope that will come.

But Kristof’s statistics in the second paragraph are totally bogus. Yes, perhaps there are twice as many violent or cruel passages in the Bible as in the Qur’an, but anyone with two neurons to rub together will ask the question, “Yes, but what is the relative length of those scriptures?”

So, given that the Qur’an is less than 10% as long as the Bible, the density of violent and cruel passages is over 5 times greater in the Qur’an than in the Bible.

But ignoring Kristof’s innumeracy, he then goes on to imply that scripture is irrelevant in judging a religion:

It’s true that terrorism in the 21st century is disproportionately rooted in the Islamic world. And it’s legitimate to criticize the violence, mistreatment of women or oppression of religious minorities that some Muslims justify by citing passages in the Quran. But let’s not stereotype 1.6 billion Muslims because of their faith. What counts most is not the content of holy books, but the content of our hearts.

I agree that we shouldn’t stereotype or demonize Muslims because of their faith, but what if the content of some Muslim hearts is determined by the content of their holy books? Shouldn’t we then hold the books up for criticism? That doesn’t demonize the faithful, except insofar as the book inspires them to do bad things. And except for denialists like Glenn Greenwald, that’s pretty much indisputable for the Qur’an. In fact, it’s the violent nature of that scripture that, according to reformers like Maajid Nawaz and Ayaan Hirsi Ali, must somehow be tamed or ignored to solve the problem of Islamist terrorism.

In the rest of the piece, Kristof utters the usual liberal sentiments—most of which I agree with. Trump is a jerk for trying to ban Muslims, let’s not discriminate against Muslims simply because of their beliefs, and so on. But he ends this way:

Yes, the Islamic world today has a strain of dangerous intolerance. And for all of America’s strengths as a society, as Donald Trump shows, so does America.

Of course there’s some intolerance in America. But compare it to Iran, ISIS-controlled Iraq, Afghanistan, or Saudi Arabia. We don’t behead criminals, we don’t kill blasphemers, we don’t stone adulterers or throw gays off roofs, we don’t prohibit women from driving, we don’t have a religious system of law (one that gives women half the say of men), and we allow Muslims to be citizens (Saudi Arabia doesn’t grant that privilege to non-Muslims).

It’s undeniable that much of the biased and undemocratic behavior of these Islamic societies comes from Islam. It won’t do to pretend that “the Islamic world” is just as bad in its treatment of minorities, unbelievers, women, and gays as is, say, the United States. Kristof, in his fervent and admirable desire to prevent bigotry against Muslims, in the end must resort to distortions to do so. But you don’t need to do that: all you need to do is realize that you can criticize a creed without demonizing its adherents.

My view is that Kristof wanted us to make the following syllogism:

Premise 2. But there’s also bad stuff in the Bible.

Premise 3. And, there’s good stuff in both Islam and the Bible.

Conclusion 1. Therefore, Islam is pretty much equivalent to Christianity/Judaism.

Premise 4. We know that Christianity and Judaism are good.

He of course is counting on his readers to share his premise 4 uncritically.

The particular questions he chose for his “quiz” seemed designed for people to get them wrong, and thus feel uninformed about religion, and thus unqualified to have an opinion about religion. (I got 11 out of 14 right.) Kristof obviously thinks himself sufficiently informed to have an opinion. But the questions are almost all pointless scriptural exegesis or memorization– you don’t need to know any of that to have an informed opinion, because religions are what their practitioners do, not some nonbeliever’s interpretation of somebody else’s scripture.