A brand-new poll from the Pew Research Center gives a dispiriting result: there’s widespread resistance to free speech in the U.S., and even more so in Europe. Further, within the U.S. itself, younger people favor more restrictions on speech than do their elders.

The complete report is here, and I haven’t yet read it, but the link above gives the salient results on free expression—queried as the right to utter offensive speech. First, though, the precise survey question:

We asked whether people believe that citizens should be able to make public statements that are offensive to minority groups, or whether the government should be able to prevent people from saying these things.

That’s not too bad, because the question is clear, and the issue of government prevention is clearly an issue of censorship and, in the U.S. of our Constitutional First-Amendment rights.

Here are the results for the U.S., broken down by age, sex, political affiliation, ethnicity, and education. 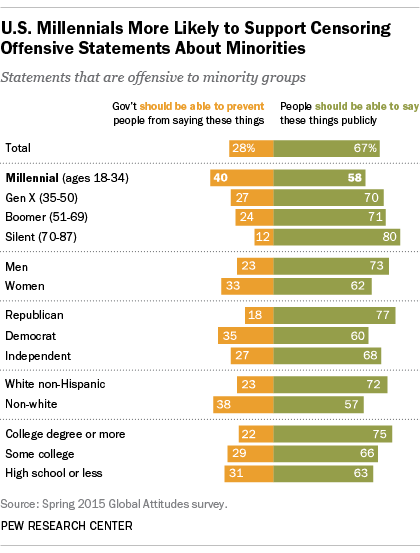 When you go to Europe, some of whose countries already have speech restrictions (e.g., Germany and Poland), the approval of censorship is higher—shockingly high. Given the common accusation of “Islamophobia” in some of these countries, it’s even more surprising that, say, 48% of French and 70% of Germans favor censorship of speech that offends minorities. Overall, censorship of this sort is approved by 28% of Americans and by 49% of Europeans: almost twice as many as in the U.S.! In this sense, at least, we are the “land of the free”.

One reason that Europeans may be less opposed to censorship are the laws already in place in some countries, which may make citizens think that it’s okay to restrict speech. It would be instructive to see if there’s a correlation between the existence of anti-speech laws and individuals’ responses to this question. 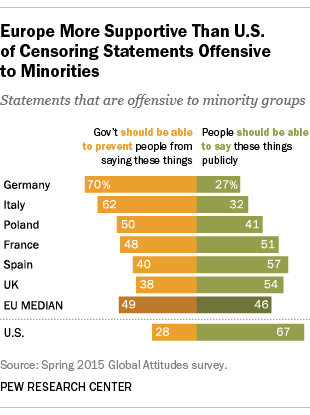 Finally, Pew confected an “index of censorship” for the many countries it surveyed, though there are no data for many countries in the Middle East, southeast Asia and Africa. What they found is below: the greener a country, the freer expression it favors, while more orange countries favor more censorship: 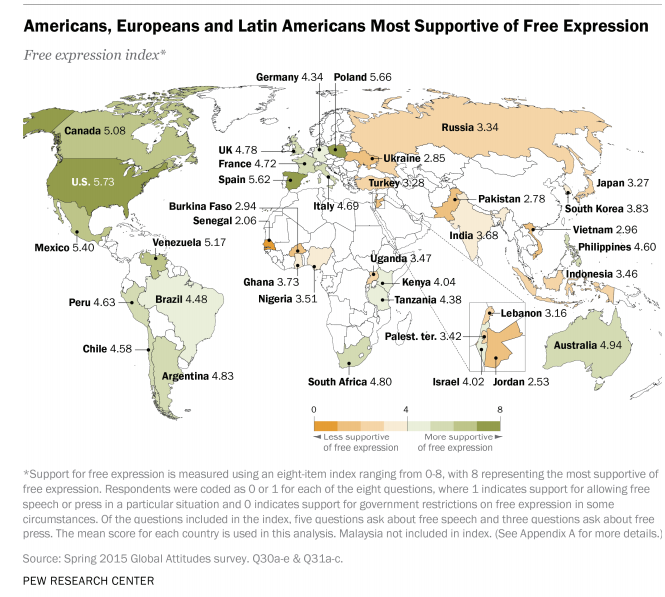 Pakistan, Jordan, and Senegal get the raspberries here, while North and South America, Europe, South Africa, and Australia are less censorious.

The full report gives many more data on things like gender equality, freedom of the press, and the effect of the Internet on feelings about free expression, but I’ll leave you to peruse this yourself.

I’ll end with a caveat: although I’m in favor of higher numbers of people opposing censorship of statements offensive to minorities, that doesn’t mean I’m in favor of offending minorities. It should be clear from what I’ve written on this site that “offensive” speech is the form of free speech that deserves the most protection, because banning speech that offends anyone is the surest way to shut down free discourse—the foundation of democracy.

94 thoughts on “Many Americans, and even more Europeans, favor restricting speech offensive to minorities”