It’s time to affirm once and for all that humans are apes, and to educate those who say otherwise. To deny that is to deny a palpable fact of biology and evolution: our close ancestry with other primates.

One of those who need education is Jonathan Marks, a cultural anthropologist at the University of North Carolina at Charlotte. The University lists his interests as “Biological Anthropology, Human Genetics, History of Anthropological Thought, Evolution and Human Society.”  And he’s clearly passionate about his field, but his passion sometimes becomes rather aggressive—or even nasty.

I have a report, for instance, that Marks once gave a talk that was, in part, about human genetic variation and “races,” and in it he vehemently denied not only the existence of races, but also attacked studies of genetic variation among human populations, studies that, he claimed, were motivated by racism. When a questioner asked him, “Are you saying that anybody who studies geographic variation in human genes is a racist?”, Marks reportedly answered (in a large seminar), “Yes, and I’d put my boot up their ass.”

He’s now trying to put his boot up another posterior: the notion that humans are apes. But that posterior won’t yield, because, in fact, humans ARE apes. For that is how we’re technically classified in biology. Here’s a simple representation of that, showing that we’re apes; and one could also have put in another bracket around orangs, gorillas, the two chimp species and us, and labeled it “hominids (great apes)”. 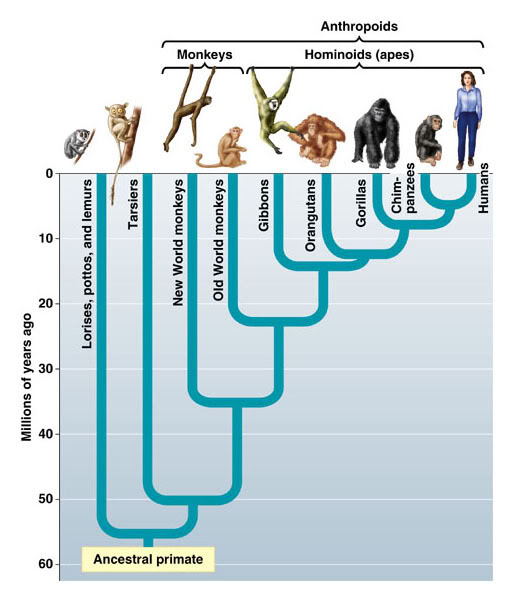 And the classification from Wikipedia:

If you look up the family Hominidae, you’ll see that it includes all the “great apes”: orangutans, chimps (both common chimps and bonobos), gorillas, and humans. In other words, we are “great apes”. We are also “hominids”, a term once used to refer to every species on “our” side of the evolutionary tree since we diverged from the ancestors of the other apes, but now hominids refers to all the hominidae, and the former “hominid” is now “hominin“.  (You can see the full phylogenetic placement of our species here.) Finally, we are in the more inclusive superfamily Hominoidea, which are all apes, including the great apes and the gibbons.

But Marks disputes this universally accepted classification in a post at the website PopAnth called “Are we apes? No, we are humans.” What he’s doing in the post, as you’ll see below, is denying that we’re apes because the popular conception of apes includes every hominid other than humans, but not humans themselves. He also intimates that there are dire but unspecified political consequences of thinking that we’re apes. Here’s his argument:

Our ancestors were of course apes. That is what science shows. Our closest zoological relatives are apes, and we fall phylogenetically among them–indeed, we are closer to a chimpanzee than that chimpanzee is to an orangutan.

But that elaborates the identities of our ancestors, not us. They were apes, but that doesn’t necessarily tell us what we are. The problem, as Simpson understood decades ago, is that ancestry is not the same as identity.

Yes but the classification of humans as hominids—as apes—does indeed tell us what we are, at least in one sense. It tells us, as you see above, that our closest relatives are other species that share some derived traits (called “synapomorphies”) with other apes, showing that these traits arose after we branched off from other primates. You can see a list of those synapomorphies here.

Marks goes on, confusing the issue of ancestry, which is what our classification with other apes is meant to show, with “identity,” a term that is pretty nebulous and has no formal meaning in biological classification, or even in biology.

We reject the simple equation of ancestry with identity in other contexts. Why should we accept it in science? The short answer is that we shouldn’t.

Here you can see the ideology creeping in, though I’m not quite sure what ideology Marks projects, though he appears to be a leftist in other contexts. But saying that we’re “apes” has no “bio-political” connotation at all, except in the minds of ideologues like Marks. It doesn’t say that we are our ancestors: it says that we belong to a group whose members share some derived traits and who are evolutionarily diverged from other primates. It becomes clear that Marks is using a concept of “ape” different from that used by other scientists: apes are those other species that we gawk at in cages at the zoo:

What are we? We are human. Apes are hairy, sleep in trees, and fling their poo. I should make it clear: Nobody likes apes more than I do; I support their preservation in the wild and their sensitive treatment in captivity. I also don’t think I’m better than them. I’m smarter than they are, and they are stronger than I am. I’m just not one of them, regardless of my ancestry. I am different from them. And so are you. You and I have 46 chromosomes in our cells; chimpanzees have 48. They are indeed very similar, but if you know what to look for, you can tell their cells apart quite readily.

Then he becomes terminally confused:

And indeed we–that is, Homo sapiens–fall phylogenetically within the group that we call “apes.” Shouldn’t that make us apes?

On the other hand, we also fall phylogenetically within the group that we call “fish.” That is to say, a coelacanth is more closely related to us than it is to a trout. So we fall within the category that encompasses both coelacanths and trout, namely, fish.

Yes, but that’s not the same thing as saying that we fall phylogenetically with the group that we call fish. In fact we don’t (see below).

Yet we are not fish. There are certainly things to be understood by confronting our fish ancestry (such as our gestation in a saline, aqueous environment), but fish can’t read, so if you are reading this, then you are not a fish.

Well, “bony fish”are in the superclass Osteichthyes, to which we don’t belong, but we do belong to the class Sarcoptrygii, which are descendants of early fish, a group that include tetrapods.

Saying that we are not apes is like saying that Drosophila are not flies (dipterans). It’s just dumb, and somehow meant to set us apart from other great apes. Yes, we do have unique traits, but we’re still in the family of hominids. And, contra Marks, that does not mean that we are our ancestors. It means we share a common ancestor that lived in the past.

Historically, Marks is a bit like Deepak Chopra, who can’t let a criticism slide. So when the commenters try to set him straight, he goes into the comments section and argues with them—nearly always a mistake, particularly if there are biologists afoot. Here’s a humorous exchange from that section: 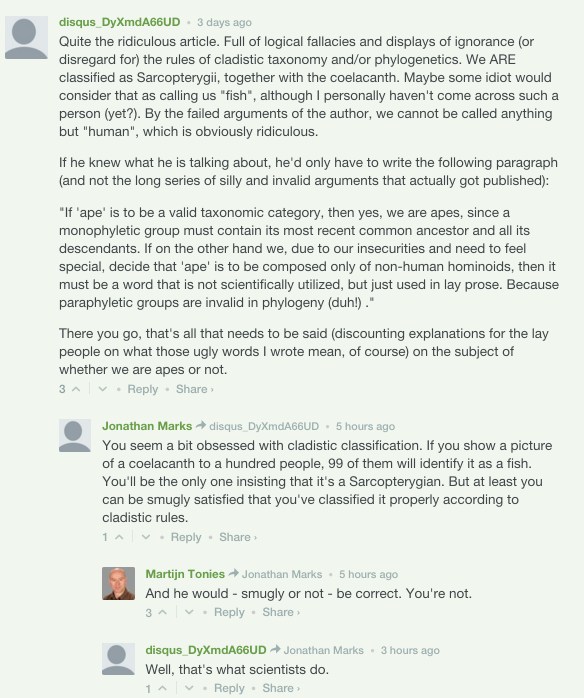 Finally, it may not be irrelevant that Marks is also author of a book called Why I am not a Scientist, characterized like this:

Science, Marks argues, is widely accepted to be three things: a method of understanding and a means of establishing facts about the universe, the facts themselves, and a voice of authority or a locus of cultural power. This triple identity creates conflicting roles and tensions within the field of science and leads to its record of instructive successes and failures.

Well, whatever this postmodern babble means, if Marks wants to establish that he’s not a scientist, he’s gone quite a ways towards that goal in this piece.

And let’s not forget that denying that humans are apes plays right into the hands of religious human exceptionalism as well as creationism. It may not be surprising that Marks’s University web page says this: “Prof. Marks is on leave during the Academic Year 2013-2014, participating as a Templeton Fellow at the Institute for Advanced Study at the University of Notre Dame.”