If former Christians who are nonbelievers were to be barred from speaking at an American or British University because they planned to criticize the tenets of evangelical Christianity—including opposition to evolution, women’s right, or gay rights—secularists would rise up in anger. Imagine, for instance, Jerry DeWitt or Dan Barker being barred from speaking at the University of Michigan’s secular society  for criticizing religion.

That’s pretty much unthinkable—unless the former believers are Muslims. In such cases their criticism of Islam becomes “hate speech,” universities cower before the threat of Muslim “offense,” and the speaker is often barred or disinvited.

Such was the case of Maryam Namazie at Warwick University in the UK. Invited to speak by the University’s Atheist Society (AS), the Student Union (SU) overruled them. The AS has appealed, and during the appeal the SU has disingenuously proclaimed that “the process for reviewing this particular speaker event has not been completed” and so claiming they never made a decision. The SU’s statement has been called “unpardonably misleading” by the Warwick Atheists, Secularists and Humanists, and I have to agree.(See the exchange of emails here.)

Let’s hope the SU reverses its decision, but if it does so I suspect it would be not because the SU realizes it made a misstep, but because of outside pressure.

Some of that pressure is coming from outside notables, including doctor and science writer Ben Goldacre:

I do a lot of talks for universities. With regret, I will never talk for Warwick now they've banned Maryam Namazie. http://t.co/4nXxnsj97b

FFS – someone at Warwick needs to sort this out. I'm with Ben. https://t.co/7UhfMWsIf9

Brian Cox hasn’t joined the boycott, but he stands with Goldacre and Singh (I suppose he has his own reasons). 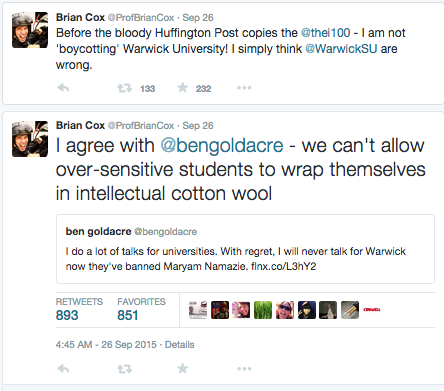 I’ll add my voice to the boycott, but of course the chance that I’ll ever be invited to Warwick University is pretty close to zero. But you can, like me, sign the Change.org petition asking that Namazie be allowed to speak at Warwick. Only 817 signatures are needed to reach the 5,000 they want, and it would be lovely if readers here could put it over the top. Even if you disagree with Namazie’s viewpoints, remember that this is an issue of free expression and censorship.