One of the signs of increasing secularism, and of advancing morality as well, is the recognition that people who are terminally ill and wish to end their lives to avoid a horrible “natural” death should be allowed to do so.  Three U.S. states—Oregon, Washington, and Vermont—already have such laws, and the California assembly just passed a similar bill, the “End of Life Option Act “. (The bill squeaked through the Senate, the other part of the legislature, a few months ago.) Most of the opposition to these bills comes from religion, especially Catholics and, in the UK and Canada, Anglicans.

The California Act stipulates that physicians can prescribe a life-ending dose of drugs (presumably barbiturates) after patients go through a three-part procedure: presenting two oral requests (15 days apart) to an attending physician, as well as one written request, which has to be signed in front of witnesses who declare the patient compos mentis. The act has been called the Brittany Maynard Bill, after the young woman who died of cancer in November of last year at age 29. As the Los Angeles Times reports:

. . . the proposal gained momentum after Californian Brittany Maynard, 29, moved to Oregon last year so she could end her life with drugs to avoid the debilitating effects of brain cancer. Her case was covered nationwide, and in a videotaped appeal before her death Maynard urged California lawmakers to pass the assisted-death legislation.

“I am heartbroken that I had to leave behind my home, my community and my friends in California, but I am dying and refuse to lose my dignity,” Maynard says in the video. “I refuse to subject myself and my family to purposeless prolonged pain and suffering at the hands of an incurable disease.”

The bill has been strenuously opposed by the Catholic Church, of course, who see end-of-life suffering as a good because, like the odious Mother Teresa, they think it’s what God wants. “Euthanasia,” as the Vatican calls it, is considered a grave sin by the Church—for both the patient and the doctors who assist the dying. How anybody can presume to pass such judgment on another person’s rational decision is beyond me. This is one of the ways that the tenets of religion violate standards of common decency.

The California Senate, which narrowly passed the bill, must revisit it, but I suspect it will go through, and then move to to governor Jerry Brown’s desk. Brown has, I believe, refused to say whether he’ll sign the bill, which is reprehensible. If he vetoes it, there won’t be enough votes to override his veto. If he vetoes this bill I will have lost every iota of respect I ever had for the man.

And this just in from reader David, who called my attention to a tw**t emitted by Ricky Gervais three days ago. Can anyone imagine a more screwed-up attitude than that evinced on the poster? 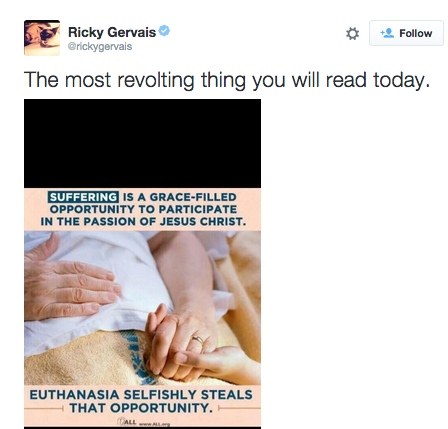 Here’s an anecdote about Mother Teresa—told by the Mother herself at the U.S. National Prayer Breakfast:

One day I met a lady who was dying of cancer in a most terrible condition. And I told her, I say, “You know, this terrible pain is only the kiss of Jesus–a sign that you have come so close to Jesus on the cross that he can kiss you.” And she joined her hands together and said, “Mother Teresa, please tell Jesus to stop kissing me.”

Did she not see the irony?