Christians around the U.S. (and in the U.K., too) are crying that there’s a “war on faith”, which can mean one of two things. The first sense, and the sense that is wrong, is that there’s an organized conspiracy on the part of nonbelievers to disenfranchise Christianity. This is the sense that, as the Washington Post reports, Senator Ted Cruz of Texas—a Republican candidate for President (so far) meant when he tried to energize a GOP rally yesterday by playing the “fear” card:

Cruz, looking to gain traction in an early voting state with a heavy concentration of evangelical Christians, held a highly organized and produced “Rally for Religious Liberty” Friday night. The rally featured live music, interviews with people who said their religious liberty was violated and sermon-like speeches from Cruz, who tried to cement himself as the candidate of choice for evangelical voters in a crowded Republican primary field.

“There is a war on faith in America today,” Cruz said, later noting that 54 million evangelical Christians stayed home during the 2012 election.

“I’m here to tell you, we will stay home no longer,” he said as the audience, which filled a ballroom and the campaign estimated to number 2,500 people, cheered.

But why are Republicans staying away from the polls? Well, perhaps they feel a sense of futility, so they just don’t vote. And that futility is a result of the depredations of secularism. Although the report doesn’t make that clear, and refraining from voting on such grounds just seems dumb, that indeed seems to be Cruz’s contention:

Cruz, who is attempting to paint his candidacy as an insurgent insider — a senator who relishes fighting both Republicans and Democrats and in recent weeks accused Senate Majority Leader Mitch McConnell of lying — echoed a theme of the event: if forced to choose between fidelity to God and the government, people here will choose God.

“If we cannot worship God, if we cannot live according to our faith …. all other liberties fade away,” Cruz said.

The event highlighted the stories of people “victimized by government persecution,” according to Cruz’s Web site, including a former Air Force sergeant who said he was fired because of his religious views on gays, a former Atlanta fire chief who said he was fired for his religious beliefs and an Iowa couple who refused to host a same-sex wedding. Cruz lauded them as “heroes.”

Well, the fire chief has filed suit, and if his contention was right he was unfairly prosecuted, but the city of Atlanta claims he was fired for “poor management skills.” So that’s by no means settled. The Army sergeant was fired not because of his religious views on gays, but because he refused an order to desist from helping others use military authority to persecute gays, a persecution that violates of Army policy. And the Iowa couple lost an anti-discrimination lawsuit, and then vowed simply not to host any more weddings in gallery.  Enforcement of anti-discrimination laws is not persecution, but you will be persecuted for violating those laws. Cruz is distorting what really happened when he sells these anecdotes as skirmishes in the War on Christianity.

The Texas Republican and others here, including members of his Iowa leadership team, told the audience that it may not be a matter of if, but when, they have their religious liberties threatened.

“Is the next victim of persecution your pastor?” Cruz asked. “Your charity, where you volunteer your time at a crisis pregnancy center?”

Well, Senator Cruz, the First Amendment is alive and well, and, if anything, religious incursions into government are at least holding steady, what with the Hobby Lobby decision and all. Still, the Supreme Court has affirmed the right of gay marriage, so if that’s considered a “war on religion”, then religion is bigoted and narrow minded. After all, same-sex couples don’t hurt anyone.

No, what really bothers these people is not a secular war on Christianity, but the second sense of “war”: the inexorable decline of faith as reason sets in and Americans put away their childish things. It’s well known that Christianity is declining in the U.S., and that has believers scared. As the Post reported in May, self-reported Christians are declining as the “nones” and unaffiliated increase, with Christians declining from 78% to 71% of Americans in just the last seven years. And it’s down from 86% in 1990. That’s a 10% decline since 2008 and a 17% decline since 1990. At this rate, there won’t be any Christians left at the end of the century! 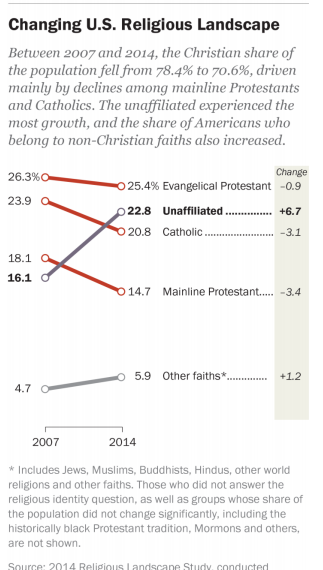 Note that all branches of Christianity have declined, while the unaffiliated have risen by 42% (from 16.1% to 22.8%). That’s an impressive jump.

A war on Christianity? I think not. What is hurting the faith is not attacks coming from the outside, but disenchantment on the inside, as believers simply walk away. Christianity, in other words, is suffering from a wasting disease.

73 thoughts on “Ted Cruz declares that there’s a “war on faith”. He’s wrong.”