The short New Yorker piece, by Patrick House, “What is elegance in science?“, bothers me, and for reasons I don’t quite understand. I’d appreciate it if readers could have a look (you can read it in 5 minutes) and weigh in below. What bothers me consciously about the piece is that is basically says nothing, but, in true New Yorker style, uses a lot of pretty words to do so.  The last paragraph in particular suffers from that problem, especially the part I’ve bolded.

Last year, neuroscientists in the United Kingdom put expert mathematicians in an fMRI and tested whether their brains responded to equations the way that other people’s brains respond to, say, a beautiful painting or piece of music. They found that some equations—often simple, powerful ones like Euler’s identity, eiπ + 1 = 0, which joins together five mathematical constants—caused “activity in the same part of the emotional brain, namely field A1 of the medial orbito-frontal cortex (mOFC), as the experience of beauty derived from other sources.” Things are not always clear in the brain, though; it is impossible to say for certain whether activity in the mOFC is a response or a precursor to an emotion, or whether it’s the emotion itself. Likely, any full description will be messy, turbulent. But within that turbulence will be, finally, an explanation for what it means to know something when one sees it, or for what the “great liquid whip” of Roger Federer’s forehand and the “whip-like thrashing” of the roundworm tell us about string theory, or for how it came to be that three pounds of inelegance thought up such a concept as elegance in the first place.

I suppose what bothers me unconsciously is the New Yorker’s seeming lack of understanding of, and respect for, science as it’s actually done. Yes, their medical articles are often good, but there’s far too much science-bashing. This often takes the form of using anecdotes to make generalities (often “counterintuitive generalities”), as does Malcolm Gladwell, or Jonah Lehrer’s specious “decline effect,” in which, he implied, scientific findings are inevitably doomed to being proven wrong. (Ironically, Lehrer resigned from the New Yorker after he was caught fabricating quotes and plagiarizing.) The idea that science undergoes a complete turnover is not true, of course: the formula for water, the fact of evolution, and the observation that DNA is a double helix are “truths” that, while provisional in a technical sense, are likely to remain true for the forseeable future!

My worry is that the magazine, which wields enormous influence among intellectuals, is wedded to a covert form of postmodernism—one that sees scientific truths as always dubious and liable to revision, and sees the humanities as just as much a source of objective truth as is science, if no more so. After all, Lehrer became famous for a book called Proust Was a Neuroscientist. (No he wasn’t!) I’m still open to debating whether the humanities and arts give us “other ways of knowing,” but that is surely questionable, and I haven’t yet seen an objective truth about the cosmos conveyed initially and solely by the humanities. What’s not debatable is that the humanities have given us as much objective truth as does science. They haven’t, though they’ve immensely enriched human existence in other ways. (Again, see my discussion in FvF.) Yes, rarely The New Yorker does have some good, hard science, but it’s hard to find amidst the anecdotes.

A knowledge of science is of immense value in modern life, and one would think that The New Yorker, which caters to the intellectuals, would give it some pride of place in their pages.

At any rate, the plaque below, affixed to a building at 28 W. 44th Street in New York, suggests that these attitudes have persisted for some time: 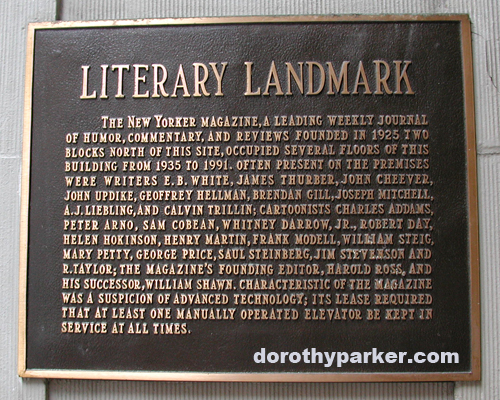