Ed Suominen was once an adherent to Laestadianism, a hyper-conservative Lutheran sect with some truly bizarre dogma (they think, for instance that only the roughly 60,000 members of that faith will go to heaven, and that everyone else will burn in hell).  But he abandoned that faith after realizing the value of evolutionary biology when it became useful for his computational work (Salon recounts his deconversion story and includes an interview). Ed is the author of An Examination of the Pearl, which describes his abandonment of faith, and is co-author, with Robert Price, of Evolving out of Eden, an engaging examination of Christianity’s unsuccessful attempts to reconcile itself to evolution. Here’s what Ed says about the latter book in the review I’ll mention in a minute:

In the concluding pages of Evolving out of Eden, Dr. Robert M. Price and I reflected on the mindset of the Christian fundamentalist, a place I myself had still been uncomfortably occupying not long earlier. Things get difficult for him, we wrote,

” . . . if he peers outside the safety of church society and “healthy” reading materials to glean some awareness of the many other theological problems lurking in the tall grass of science. He may recognize himself (and Jesus!) as an evolved primate, and Original Sin as an absurd doctrine built on unscientific sand. The very rationale of the atonement collapses, along with all those ‘sins’ his pastor carries on about, which come to look like natural, even healthy traits that allowed his ancestors to replicate and eventually produce him. The God of all Creation he once praised while musing over every tree and sunset goes quiet and cold, fading into an impersonal set of laws and forces that forms life out of randomness shaped by countless acts of suffering and death.

It should be no surprise to see so many Eden dwellers turn away from all this and scurry back to retrenchment and denial, the burden of intellectual dishonesty and cognitive dissonance still lighter than the terrifying alternative. The only other options are to water down one’s faith with accommodationism, which brings its own dishonesty and dissonance, or abandon it altogether. But science has set forth the flaming sword, and the Garden cannot remain occupied for long.”

Now a firm nonbeliever, Suominen wrote me to say that he just reviewed Faith Versus Fact on his website, which bears the overly self-deprecating title of Ed Suominen’s Shitty Little Blog. And he also told me the circumstances of writing the review:

Yours [the review] occupied the better part of two days of writing, plus some enjoyable hours I spent outside reading the book (often somewhere out in those woods with Frisky II [his cat] standing guard nearby), tabbing pages, and making notes.

Based on the photo below, it looks more like “tabby pages”!
Ed’s review, “Faith vs. Fact: Two opposing sides of the Coyne,”  is indeed a long and detailed piece, and I much appreciate it. It’s lavishly illustrated with pictures of Frisky as well. Here’s one that also shows the care with which Ed read the book: 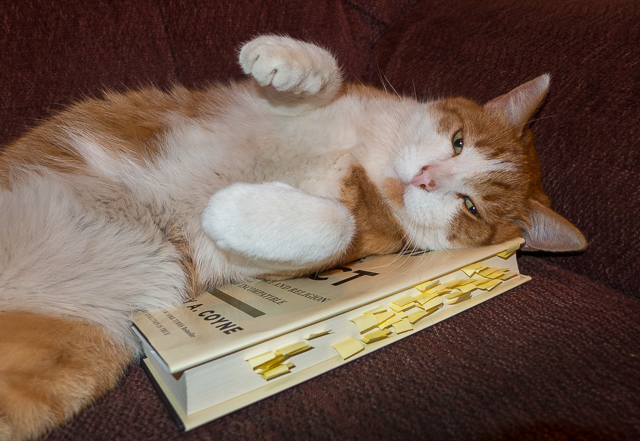 Now Ed notes that he’s not unbiased, as we’ve met, had friendly chats about religion, atheism, and cats, and he gave me some information about his former faith that I put in the book. I’m adding that information because his review is a long and favorable one: it has, in fact, 29 footnotes! I’ll give just his verdict and two quotes.

See Jerry Coyne’s book page for more information about Faith vs. Fact, a highly recommended read. If you are wrestling with doubts about a religion that you’re not sure is true anymore, and science has any part in that struggle, give yourself a few days with this work. Reality can be difficult, but the pain of trying to deny it when you know better is far worse.

It’s not just that religions are incompatible with science, Coyne says. Unlike science, whose many different disciplines “share a core methodology based on doubt, replication, reason, and observation,” religion is splintered into countless varieties that are incompatible witheach other. Yet “this incompatibility wasn’t inevitable: if the particulars of belief and dogma were somehow bestowed on humans by a god, there’s no obvious reason why there should be more than one brand of faith.”

This argument resonates with me for a reason Coyne probably never thought of when he made it: patent law. I’ve obtained over a dozen patents, for commercially successful technology. What those pieces of paper give you is the right to exclude others from making and using what you’ve invented, a right that you can then license and sell to others, or exercise yourself to avoid competition during the 20-year patent term. Now, an omnipotent God has the ultimate patent. He could just squash everything but the One True Religion that he supposedly invented, and that would be that. But that doesn’t happen, because there is no such patent holder.

That’s a theological twist I haven’t much pondered: why does God, if he/she really is the god of One True Faith, allow other people to follow so many false gods? Is that some misguided byproduct of having granted us free will? If so, is the virtue of our having free will reason enough to exclude so many people from salvation?

Finally, Ed tells it as it is, and remember that he was a former fundamentalist Christian (his emphasis):

At this point in my review, and in my life, I have the blessed freedom to offer the real answer to that dilemma, for those uncomfortable pew-sitters reading this who are suffering through the churnings of doubt: Revelation without observation is bullshit.

The last section of his review, “Facing Facts,” which deals with faith, ecology, and global warming, is beautifully written, but I’ll let you go see for yourself.