My science friends who criticize me for going after the John Templeton foundation too critically, saying to me, “Hey, they fund real science and not just woo,” should have a look at this 6-minute video (click on screenshot) called “Science and the Big Questions”.  It shows how reputable scientists like Brian Greene (physics) and Martin Nowak (evolutionary biology) have been coopted by Templeton to help sell their aims. (Greene’s World Science Festival is largely funded by Templeton, as is a huge chunk of Nowak’s research.) 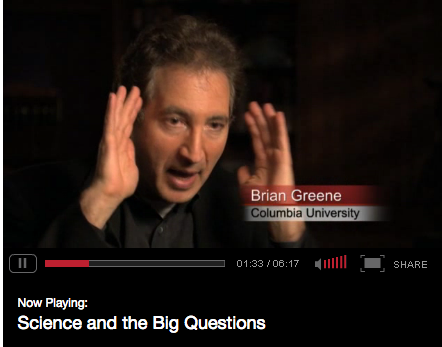 Note the implicit references to theology, as in Greene’s statement that “We want the person who think about the world one way to come into contact with someone who thinks about the world perhaps a different way and see: are they really at odds? Are there points of contact? Are there ways they can meld together and yield a richer picture of the way reality is constructed—or not.” Now one could say that he’s not talking about theologians, and perhaps he isn’t, but then have a listen to the rest of the video.

Frankly, I’m not sure how anything other than science can tell us “how reality is constructed.”

Shortly after Greene appears, we see Martin Nowak, a Catholic, being more explicit: telling us why scientists should talk to theologians.

The whole tenor of the Templeton Foundation is to change its words without changing its aims. “God” and “theology” are largely disappearing in favor of “The Big Questions, ” “Meaning and Purpose,” “Other Perspectives,” “Spirituality” and “Getting Other Points of View.” But make no mistake: the intent is still to find a rapprochement between science and religion. If you read Faith versus Fact, you’ll see that Templeton continues to hand out millions of dollars to projects, even scientific ones, that involve input from theologians. Theologians have nothing to contribute to understanding our cosmos. Yes, they can tell us about the history of thought about God, but that’s not much difference than telling us the history of thought about Zeus, Wotan, or Santa.

Philosophers I have no problem with, for they can provide valuable input to some scientific research programs. But theologians? Those who study nonexistent beings? They have no place in any endeavor that aims to tell us about reality.

Line up, you impecunious scientists! For the small price of selling your soul, you have over a 50% chance of getting a big grant proposal funded (my emphasis). I almost hate saying this, as I can see the scientists saying, “Hey, Coyne has told us that we can get some big money!”

The John Templeton Foundation serves as a philanthropic catalyst for discoveries relating to the Big Questions of human purpose and ultimate reality. We support research on subjects ranging from complexity, evolution, and infinity to creativity, forgiveness, love, and free will. We encourage civil, informed dialogue among scientists, philosophers, and theologians and between such experts and the public at large, for the purposes of definitional clarity and new insights.

Our vision is derived from the late Sir John Templeton’s optimism about the possibility of acquiring “new spiritual information” and from his commitment to rigorous scientific research and related scholarship. The Foundation’s motto, “How little we know, how eager to learn,” exemplifies our support for open-minded inquiry and our hope for advancing human progress through breakthrough discoveries.

65 thoughts on “Templeton keeps up the woo”