We have a special treat today: biologist Lou Jost, who works in Ecuador, sent a video and a bunch of photos of a bird that I [Jerry] didn’t even know existed. It’s surely one of the world’s most colorful and beautiful birds. Here are Lou’s notes (indented):

I’ve just had a magical bird experience which I’d like to share. I was showing our newest reserve in northwest Ecuador to a group of ornithologists and botanists, including Robert Ridgely, author of many books and field guides on Latin American birds. As we drove to our hotel after a long day in the forest, a stunning Plate-billed Mountain Toucan (Andigena laminisrostris) perched right next to the road, in perfect soft evening light. We all took hundreds of pictures and made videos as the bird regurgitated seeds, preened its plumage, and posed for us in every conceivable position.

Ornithologists Francisco Sornozo and Robert Ridgley can be heard talking while watching the bird.

This bird lives in the western Andean cloud forests of Colombia and Ecuador, eating fruits and small vertebrates, especially nestling birds. We also have two other mountain-toucans in our reserves: the Gray-breasted Mountain Toucan (Andigena hypoglauca) from high elevations in the eastern Andes, and the Black-billed Mountain Toucan (A. nigrirostris) from middle elevations in the eastern Andes. 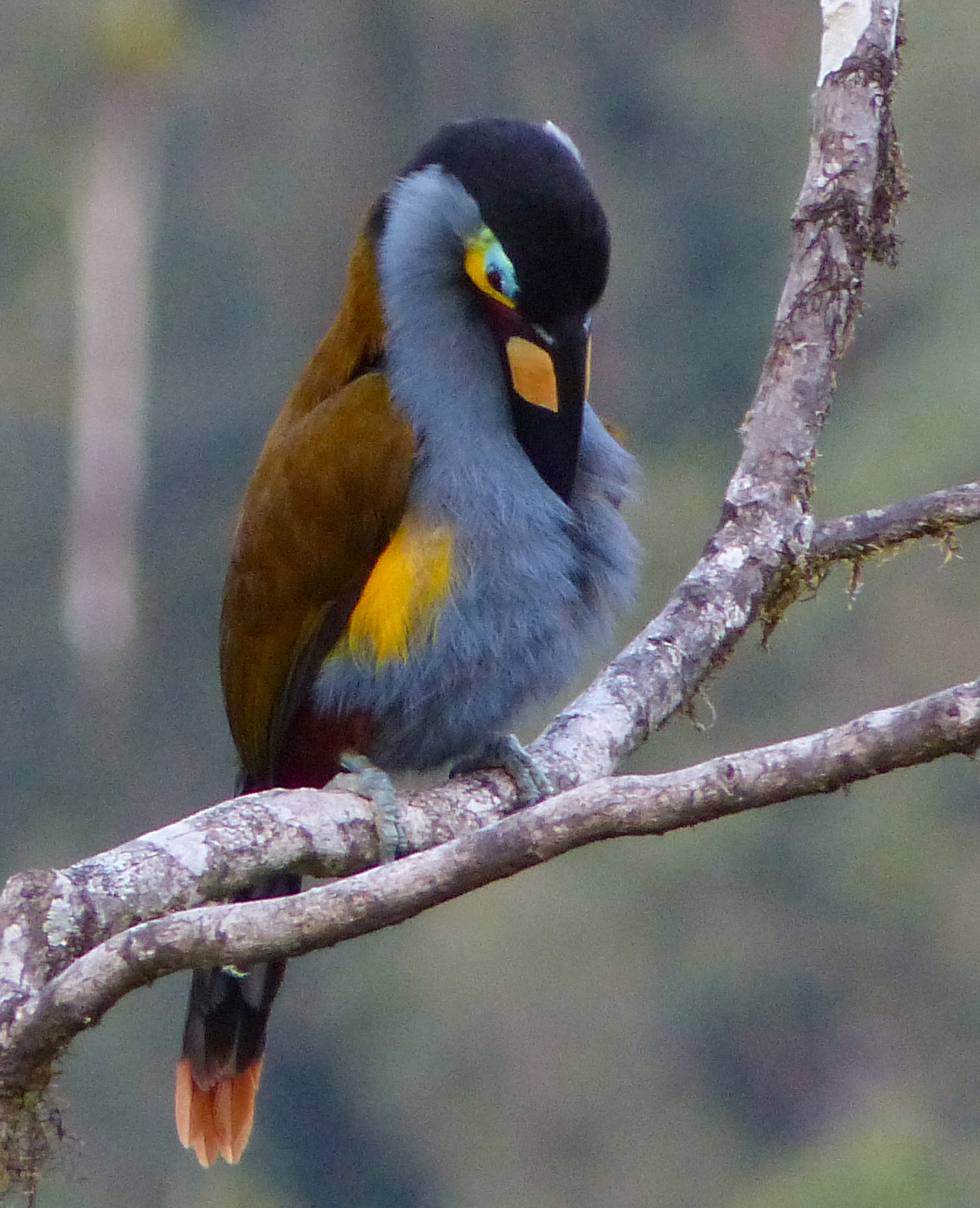 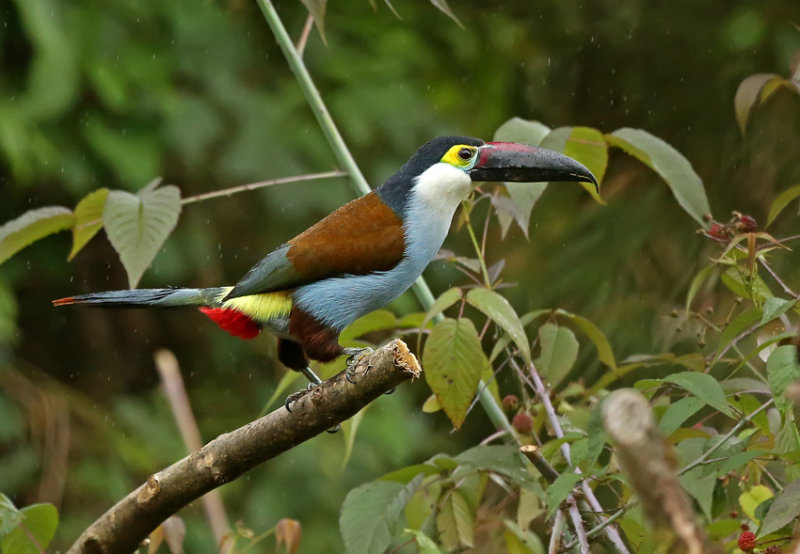 Lou’s painting of the Gray-breasted mountain toucan (if you’re a regular, you’ll know he’s an accomplished artist as well as photographer, naturalist, and biologist—both field and theoretical): 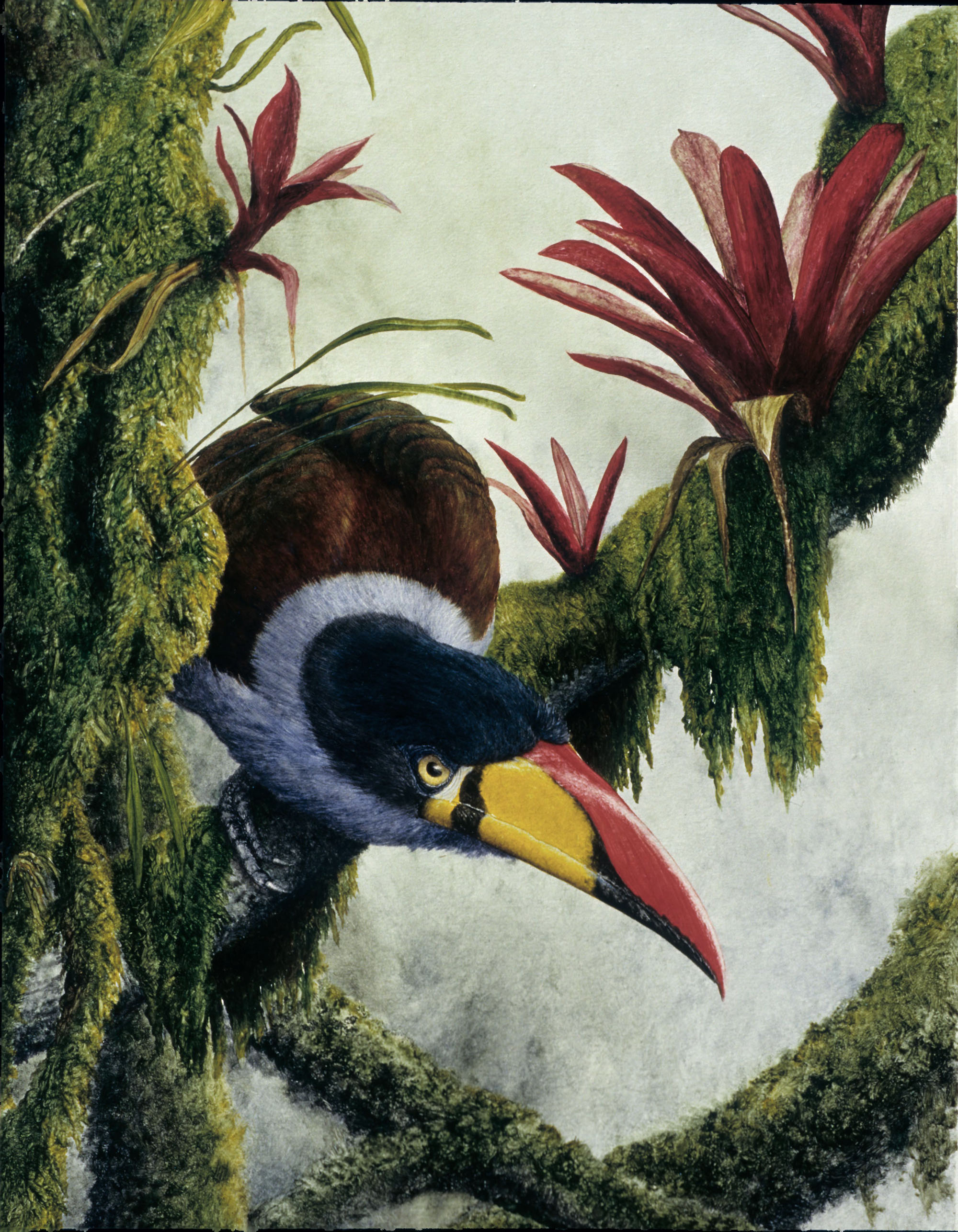 A  few notes on the plate-billed toucan from Wikipedia:

The plate-billed mountain toucan (Andigena laminirostris) is a species of bird in the family Ramphastidae. It is native to Colombia and Ecuador, where it occurs in the high-altitude humid montane forests of the Andes. It is one of five species in genus Andigena, the mountain toucans.

. . . This is the most vocal of the mountain toucans, and the sexes often duet. The male makes a loud, repeating tryyyyyyyk sound and the female makes a drier t’t’t’t’t’t’t’t noise. The bird utters rattles and clicks so loud they can be heard over a kilometer away.

. . . The species is in decline because its habitat is being lost to deforestation. It is also poached for the trade in exotic birds. It is still a “fairly common” species.[1]