Note: these opinions are mine, Jerry may (or may not) disagree with me on some of these points.

Reader “lpadron” wrote a long comment on the post Brother Tayler’s Sunday Sermon: Conservatives’ reaction to the gay marriage ruling, Jerry felt it was deeply misguided, but was neither crazy nor intemperate, so he let it post.

It rambles a bit and seems to contradict itself completely at the end, but the general gist of it seems to be this:

You write about right to same-sex marriage but you never write about the right to polyamorous marriage or consanguineous marriage because you just know they are wrong even though the arguments against them are the same as the ones against same sex marriage. Therefore gay marriage should not be allowed. Also, you are a hypocrite. 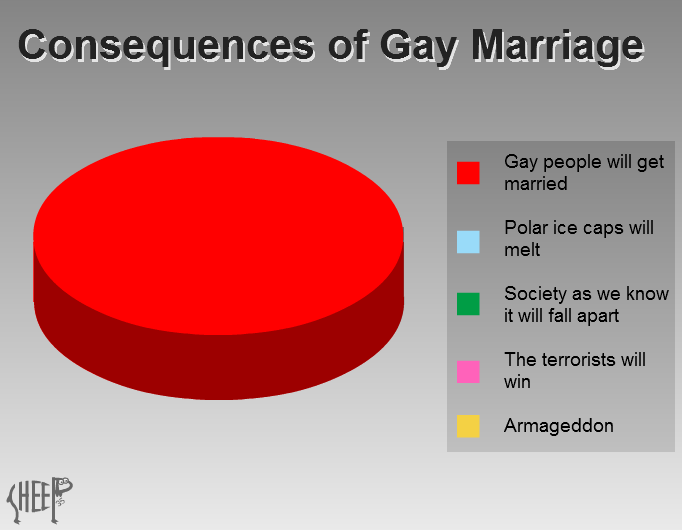 However, if the argument is that having dealt with one issue where human rights were being denied to a group for bad reasons; society might turn around and ask: who else might we have been unfairly denying human rights to? Well, then yes. But then who could possibly have a problem with that?

I’m really not going to deal with the Argument from Icky. Most of us don’t particularly want to see our parents copulate, however most of us also realize that it doesn’t mean that our parents shouldn’t be allowed to, let alone that we should be able to terminate their access to certain basic human rights on that basis. If other people’s sexual activities make you feel nauseous, stop thinking about them in terms of sex and try seeing them as people instead.

Polyamory has been around a long time, and is probably not as rare as people think.

While openly polyamorous relationships are relatively rare (Rubin, 1982), there are indications that private polyamorous arrangements within relationships are actually quite common. Blumstein and Schwartz (1983, cited in Rubin & Adams, 1986) noted that of 3,574 married couples in their sample, 15–28% had an understanding that allows nonmonogamy under some circumstances. The percentages are higher among cohabitating couples (28%), lesbian couples (29%) and gay male couples (65%) (p. 312).[79]

In the Netherlands polyamory is legal in as much as such partners are entitled to civil unions, effectively the same place that same-sex marriage was in Ireland a year ago. In other iterations, it is legal in about 25% of the world’s countries.

The chief objection to it seems to be that in countries where it is legal is that it is often not truly consensual, particularly in countries where polygamy is legal but polyandry is not. That’s a valid concern, but I don’t really see how it is relevant to whether polyamorous partners should be allowed the same right to marriage as others. No-one has ever seriously argued that marriage between a heterosexual, monogamous couple should be banned on the basis that in some countries women are not required to consent to matrimony. In most countries where debate about polyamory is at issue, adult consent free from duress is an essential prerequisite for a contract. Without such consent, any contract is null and void.

Marriage between consanguineous couples is probably society’s Last Great Taboo, in spite of it being rampant in Genesis and prevalent in certain Egyptian Dynasties and right up until fairly recently in European Royal Families.

However, incest remains a crime in many countries, and still occasionally but rarely has tragic results as in this German case where a brother and sister both served prison sentences for incest despite it being completely consensual. The case opened up public discussion in the country about whether it really needed to be criminalized.

“I don’t believe that because incest is banned, there’s a certain attraction about doing it, but I doubt equally that getting rid of our incest law will result in any measurable increase in cases. Our moral guardians don’t need to get too worked up about this.”

Wise words in my opinion. Genetic sexual attraction is minuscule, less than a percent of any population and hardly likely to bring about the downfall of any society.

The only sane argument even worth considering is the obvious danger of recessive genes causing serious genetic diseases in offspring.

Jerry wrote me this on the subject:

You cannot predict the results of consanguineous matings, as any rare deleterious recessive could be exposed, but with matings between, for example, carriers of sickle-cell anemia, you can concentrate on that one disease and test the fetus for it. It’s a lot easier for us to deal with carriers of known genetic diseases than, say, a brother mating with a sister.

You should also read the excellent article Greg Mayer wrote here on the Inbreeding Depression in Man.

However, as serious as these biological problems are, it still isn’t clear to me why consanguineous couples can’t get married at all. Same-sex consanguineous couples would have no such problems anyway. And we do after all, live in a modern world where such couples, made aware of the dangers of procreating could be aided with options of birth control, optional sterilization, optional donor pregnancies, adoption etc.

So in summary, no, I don’t believe that any consenting adults should be denied the right to marriage. I do think that in the case of consanguineous relationships, access to medical advise and aid should be provided as a matter of course.