Yesterday I gave the background necessary for understanding a new paper in Evolution by Christopher H. Martin et al. (reference and link below). Today I’ll briefly describe the paper’s findings—findings that cast doubt on one of our premier examples of sympatric speciation.

That example was the existence of assemblages of cichlid fish in small volcanic crater lakes in Cameroon. Because genetic evidence by Schliewen et al. (1994) showed that each assemblage was monophyletic, that is, appeared to descend from a single common ancestral species that invaded the crater lakes some time ago (between 1 and 2.5 myr for Lake Barombi Mbo and 100,000 to 2.5 myr for Lake Bermin), this gave evidence that the formation of 11 species in Barombi Mbo and 9 in Bermin had occurred sympatrically—without geographic isolation of populations.

Read yesterday’s post for background. Here are the two radiations at issue, showing the location of the crater lakes. 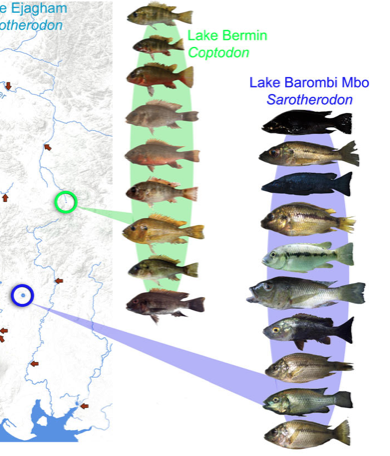 The authors re-did the genetic analysis of the two radiations shown above (and others from different lakes as well), producing more than 350 million DNA sequences. (This is the level of analysis that new techniques permit us.) From this they then re-did the phylogenetic analysis. Here’s what they found.

How did Martin et al. detect this introgression? By looking at the asymmetry of genetic similarity between species within the radiations, and also between those species and others outside the lake. As they explain:

Information about the directionality of introgression comes from the asymmetries in the relationships among populations given the tree. For example, if we imagine a tree ((A,B)(C,D)) with subsequent introgression from B into C, population C would show unusually high covariance with A, but B would not with D.

I won’t go into the gory details, and, truth be told, the complete details of the methodology elude me, but the results are clear: the species in the lakes are not convincingly monophyletic, and also exchanged genes not only with each other, but with some species outside the lake.

How could this happen? In several ways, all of which violate the notion that speciation (the generation of largely reproductively isolated entities within the lake after an invasion by a single ancestor) occurred with free gene flow. First, there could be multiple invasions of the crater by fish from a single lineage, with that lineage changing genetically between invasions.  That could mean that some reproductive isolation could have evolved between the invasions, and that could promote speciation between the fish in the lake.

An alternative scenario involves multiple colonizations of the lake by either different ancestral species or, as above, different segments of a single ancestral lineage at different times. The multiple colonists could then form a hybrid swarm, with copious mixing of genes, and then that swarm could sort itself out into different species in the crater lake. Again, some allopatry is required.

In both cases, the gene exchange that occurred while new species were forming in the lake gives them the appearance of all descending from a single ancestor that invaded only once, but in reality the speciation involved an allopatric (geographically isolated) phase.

Whatever happened, the signal of gene exchange is clear, and pretty much eliminates these two crater-lake radiations as a result of purely sympatric speciation. (I hasten to add that some of the genetic divergence between species surely evolved within the crater, but the reproductive isolation also required an allopatric phase for at least part of the process.)

The authors note too that the crater lakes do have some different ecological niches, and, if fish tend to mate where they live, that would facilitate speciation within a small area, but an area in which there is still some spatial isolation between the speciating populations. Traits in animals or plants that produce an automatic association between location and time of mating are called “magic traits” because they have a double effect. For example, a single pregnant female fish might like to hang around at the bottom of the crater lake, and if its offspring are produced there, and they show a tendency to stay there, as well as mating with others that are nearby, this would lead to a kind of geographic isolation based on restriction of gene flow between fish that like to live in other parts of the lake. All that is required is that fish tend to mate and produce offspring in certain areas, and offspring mate with those nearby. This would eventually yield selection to adapt to your habitat, and the appearance of reproductive isolation as a byproduct. In support of this, the authors note that many of the species in the two radiations above are “habitat specialists”, found most often in one particular part of the lake.

What are those compelling examples of sympatric speciation beyond the crater lake cichlids? One of them are the two sister species of palm trees that diverged on Lord Howe Island. (See my review of this situation in my News and Views “Speciation in a small space“; reference below).  In that case, a few palms from a colonizing species found themselves in dry soil, which automatically makes them flower earlier than plants on wetter soil (in dry soil you must to get your seeds out ASAP because soil drying over time can reduce your ability to reproduce). Thus those palms, producing pollen and ovules at the same time, were more likely to mate with each other than with their conspecific palms on wetter soils that flowered later. This could eventually produce differential adaptive evolution and reproductive isolation. Living on dry soils is one example of a magic trait in which habitat and reproduction are automatically associated.

Martin et al. cite three other examples of sympatric speciation that they consider convincing. One is the case of two groups of pea aphids that live on alfalfa and tomato in the U.S., and are said to have speciated in sympatry (tomato fields often lie next to alfalfa ones). But Allen Orr and I showed in Speciation that this is not a good case of sympatric speciation, since the divergence probably occurred in Europe, where the aphids live on multiple plants, and was probably followed by double colonization of the U.S.

The other two cases involve mole rats and spiny mice in Evolution Canyon, a canyon in Israel with ecologically distinct sides. I haven’t yet read those papers, so I can’t comment on them. But what’s clear is that, after the Martin et al. paper, perhaps the most convincing example of speciation we had is no longer so convincing.

What remains? The Lord Howe plants are a good case of speciation on a very small island, but need further investigation to see if “magic traits” could have been involved. Besides those plants, there are a few other cases (other fish and fig wasps) we mentioned in Speciation, but the evidence is not very strong.  All the data to date suggest that while sympatric speciation with free gene flow is a theoretical possibility, there is little evidence for it occurring in nature. There are certainly some cases (everything possible happens at least once in evolution), and of course getting good evidence for those cases would be hard. What we can say, though, is that there are not enough data to support the frequent assertion that sympatric speciation is common.
___________