Reader Su pointed me to a Wikipedia article on “neurodiversity” that begins as follows: 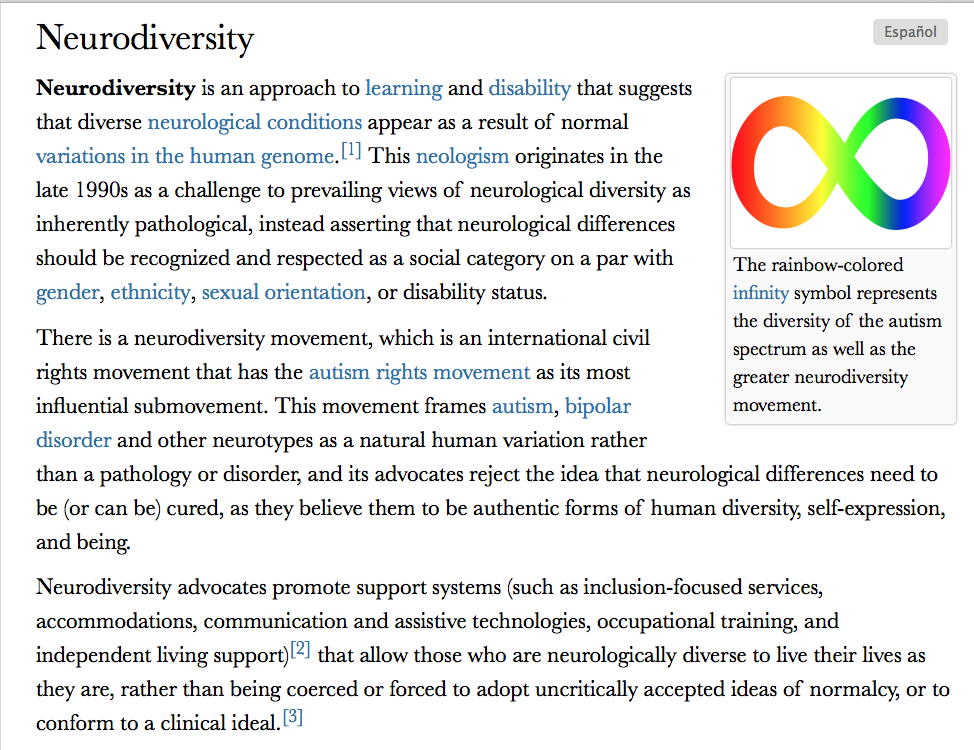 The article includes this under the “autism rights movement”:

The autism rights movement (ARM) is a social movement within the neurodiversity movement that encourages autistic people, their caregivers and society to adopt a position of neurodiversity, accepting autism as a variation in functioning rather than a mental disorder to be cured.

. . . Members of the various autism rights organizations view autism as a way of life rather than as a disease and thus advocate acceptance over a search for a cure.

I agree that there may be a spectrum for many mental conditions like depression, autism, and even bipolar disorder, and that the spectrum may even be continuous rather than a bimodal one having peaks at “normal” and “disordered”. After all, neurological conditions likely reflect a nexus of genetic causes—with cognitive and behavioral differences based on many genes—as well as environmental influences. Nevertheless, the important question is this: what do we do about those who suffer from things like bipolar disorder or autism? And I say “suffer from” deliberately, for doctors clearly see most such individuals as suffering because of their conditions. By accepting the condition as “normal”, or writing it off as simply one segment of a spectrum, neurodiversity advocates implicitly—and sometimes explicitly—deny that these conditions should be be cured.

I find that odd and even reprehensible. In the desire to see everyone as “normal”—as part of the rainbow of human diversity—this movement totally rejects the idea that some people are actually suffering and could benefit from treatment. Why else are there drugs for bipolar disorder, and why do parents desperately seek help—both medical and psychological—for children with autism?

The neurodiversity issue seems to me an extension of “identity politics”—which I’ll take here as the view that everyone is special and unique, and deserves to have their desires, abilities, and personality not only accepted, but celebrated. It’s the same mentality that has decided that, in school contests, everyone should get a prize so that nobody will be disappointed, or feel stigmatized or inferior. In the neurodiversity movement, not only should one not stigmatize “mental illnesses” (something I absolutely agree with, for these conditions are, like all disorders, determined by genes and environment), but we should accept them to the point that we shouldn’t even try to cure them.

But ask those who suffer, or who live with the sufferer, whether we should seek cures. Since conditions like autism, bipolar disorder, or schizophrenia must surely reflect neurological issues, they can in principle be cured or controlled. Bipolar disorder, for instance, can now be largely controlled with drugs, and believe me, those who have this issue want those drugs, despite their often unpleasant side effects. And which parent with an autistic child wouldn’t want that child to be helped or cured through some kind of intervention? The “facilitated communication” scam, in which people claimed to help autistic children “speak” by guiding their hands on a keyboard (the facilitators proved to be the ones doing the communicating), shows how desperate parents are to help such children.

In its desire to celebrate mental diversity, the neurodiversity movement in fact promotes suffering. Making sure that all children get prizes is one thing, and not terribly harmful, but denying children or adults cures for mental disorders is a different matter. That’s both thoughtless and horribly selfish, placing a misguided liberal ideology above the well being of the afflicted.

Just to get a medical opinion, I called my doctor, Alex Lickerman, author of The Undefeated Mind and the best doctor of any type I’ve ever known, to get his take on the “neurodiversity” issue. I was heartened to hear that he agreed with me. Alex noted that had seen many children and adults with conditions like bipolar disorder or schizophrenia, and asserted that he had no doubt that most of these people are truly suffering from their condition. And he gave me two quotes that, with permission, I reproduce here.

“The issue is not how far from normal you have to be to be considered as having a ‘disease’. The issue is how much of the way you are ‘built’ is causing you to suffer—and what do we do about it.”

“The neurodiversity movement is utter nonsense. Ask those who have these problems whether or not, if a cure was offered, they would accept it.”

There’s little doubt that the vast majority of people would. I’m aware that there’s a “deaf culture” movement, in which some people who can’t hear claim that they wouldn’t take a cure for hearing loss were it offered, and perhaps most of them are sincere. Deafness, after all, can be dealt with in a way that doesn’t always cause suffering in the person who has the condition, or in their relatives.  But I’d guess that a goodly proportion of even those people would get rid of their deafness were it possible.

165 thoughts on “What do we do about “neurodiversity”?”