A piece in ScienceNews reported some new research (not yet published) that updated an old but good paper on the famous “whistling caterpillar.” I refer to the walnut sphinx caterpillar (Amorpha juglandis), which, when disturbed—as in a predator attack—emits a high-pitched whistle from its spiracles (the body openings used for respiration).

An earlier paper (from 2010) by Veronica Bura et al. in the Journal of Experimental Biology (reference and free link below) studied the whistling behavior, showed how the sound was made, and found that it apparently startles bird predators, who flee and thus allow the whistler to live another day.  Newer work, however, shows that the whistle is even more amazing than thought, for it appears to mimic the sounds that other birds make when they see a predator: an “alarm call.”

But first, let’s look at the magnificent caterpillar. Nice one, eh?

The video below (you can see similar behaviors in the supplementary material to the paper) shows how the caterpillar whistles when it’s disturbed by experimenters, a disturbance designed to mimic a bird attack. (This caterpillar may also be attacked by other vertebrates like bats, snakes, and frogs.) You may notice that the “squeak” sounds like a bird, and that’s important.

In 2010, Bura and her colleagues did a number of studies on this species to locate the source and examine the effect of this sound. The salient results: 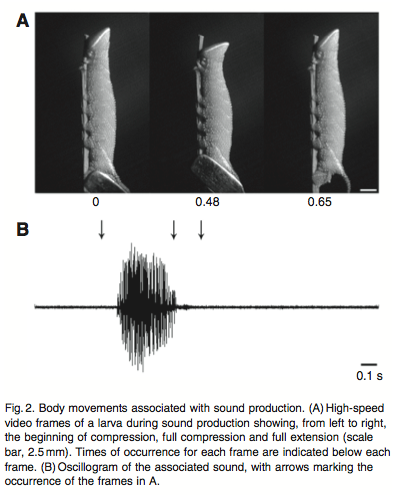 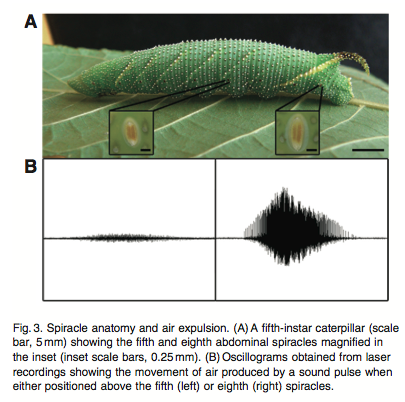 Here’s a pretty lousy figure from the paper showing a bird being deterred by the sound and diving for cover:

But crucial experment wasn’t done. If it is the caterpllar’s squeak that deters the predator, the predator wouldn’t be deterred if the sound were eliminated. In other words, they should have done the same tests using warblers with the A8 spiracles of the caterpillar occluded with latex. If the authors are right, those caterpillars should have been nommed. That would have been an easy experiment to do,  but for some reason it wasn’t. Thus the crucial information—that the sound itself deters predation—is missing.

The update by other investigators was, perhaps, motivated by one sentence in Bura et al.’s paper, which I’ve already alluded to:

In one case, the bird dived away from the caterpillar into thicker vegetation in a manner similar to how it would react to a predator.

That suggests, to the curious and atttentive mind, that the caterpillar’s squeak might imitate the “alarm” calls that birds give when predators nearby. And indeed, a new meeting abstract by Jessica Lindsay and Erik Greene (link and title below), which expands the previous results, suggesting that that the caterpillar noises aren’t just disturbing, but are disturbing because they mimic the “alarm calls” that birds give when predators like hawks are around. The birds react as if they hear the alarm call, leaving the insect alone not because they’re simply startled, but because they need to find cover fast. Here’s part of that abstract; the paper has yet to be published:

This will undoubtedly be published soon as a full paper, but in the meantime it’s a cool suggestion.  I’ve put below what I think is a “seet” call of a chickadee, which resembles the call of the caterpillar above. I may be wrong about the “seet”, so birder/readers who have better examples are welcome to post them below:

46 thoughts on “How and why does this caterpillar whistle?”