Reader Bruce Lyon sends some photos of nesting Norther Harriers and a really nice story of their breeding biology and appearance:

In April I found a Northern Harrier (Circus cyaneus) nest along the coast north of Santa Cruz in California. Harriers nest on the ground in marshy or brushy areas. Female harriers do all of the incubation but the male brings her food (mostly mice) while she incubates. The food is delivered in an aerial transfer: the female chases the male until he drops the prey item, which the female then snatches before it hits the ground. I knew the harriers had to have a nest in a patch of scrub because I saw several aerial transfers in the spot. In each of these, the male arrived with a mouse, gave his distinctive “I have a mouse” call, which brought the female up off the ground to get the mouse from the male, and she then returned to the same spot of ground. I knew the nest had to be within a ten by ten meter square area but I could not find it, both because the vegetation was dense and the female sat very tightly on the nest refusing to budge. Eventually I came within three feet the nest and the female flushed, and I was treated to the most adorable baby raptors I have ever seen. In the photo below below two chicks have just hatched and eventually all five eggs hatched: 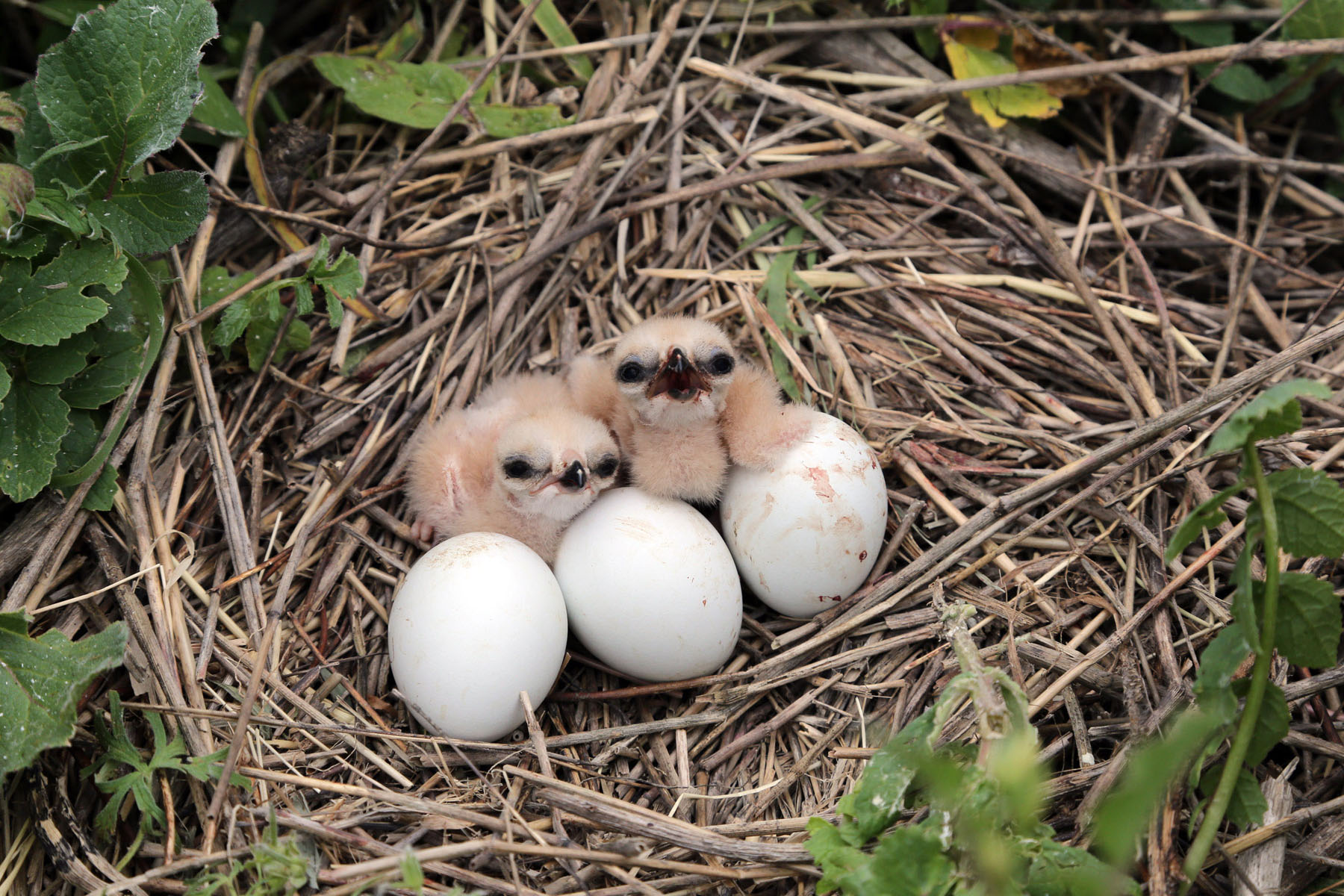 The nest (bottom center of the photo) is in coastal scrub right next to the coast: 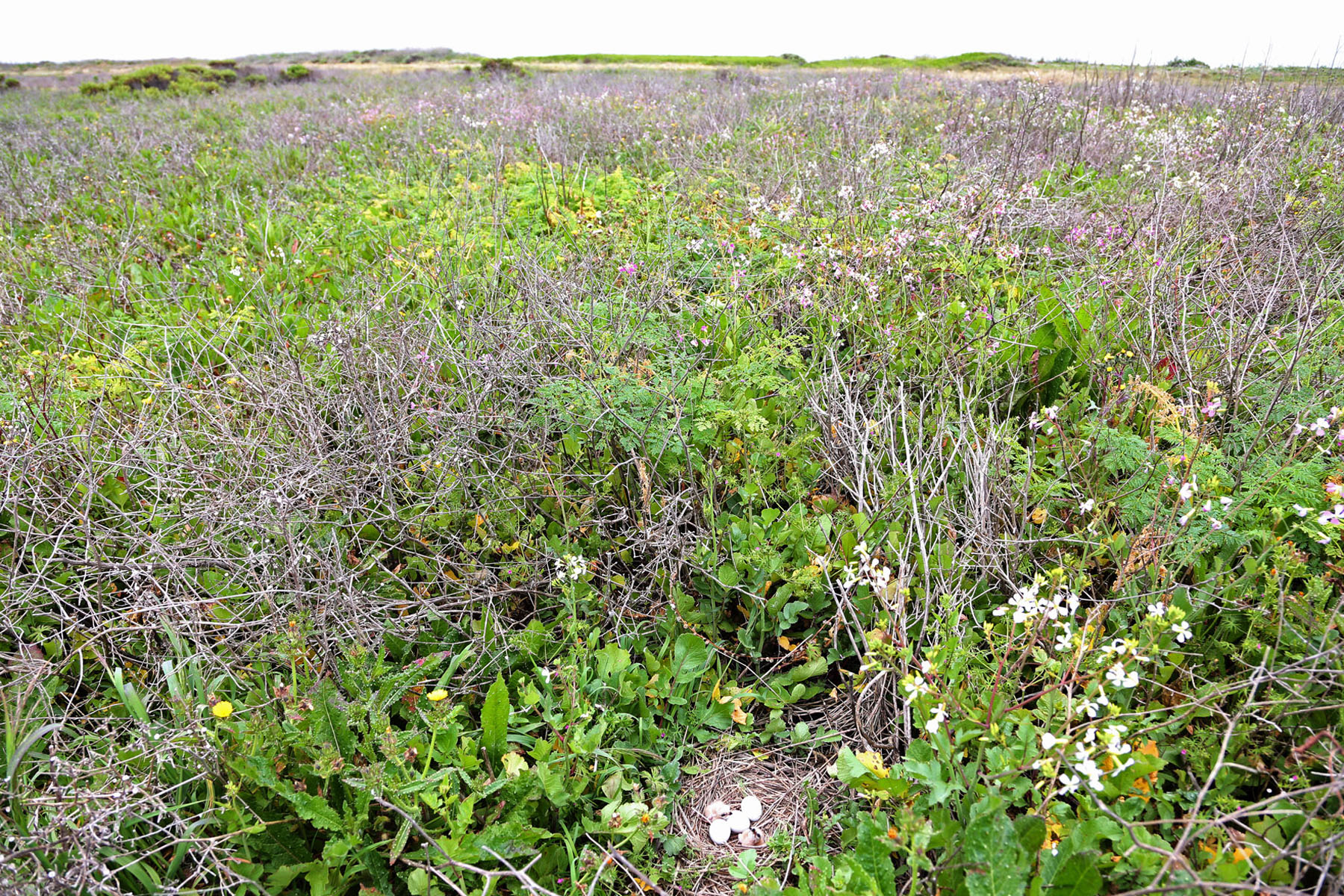 The female continued to bring in nesting material even after the chicks hatched. Here she is about to drop down to the nest: 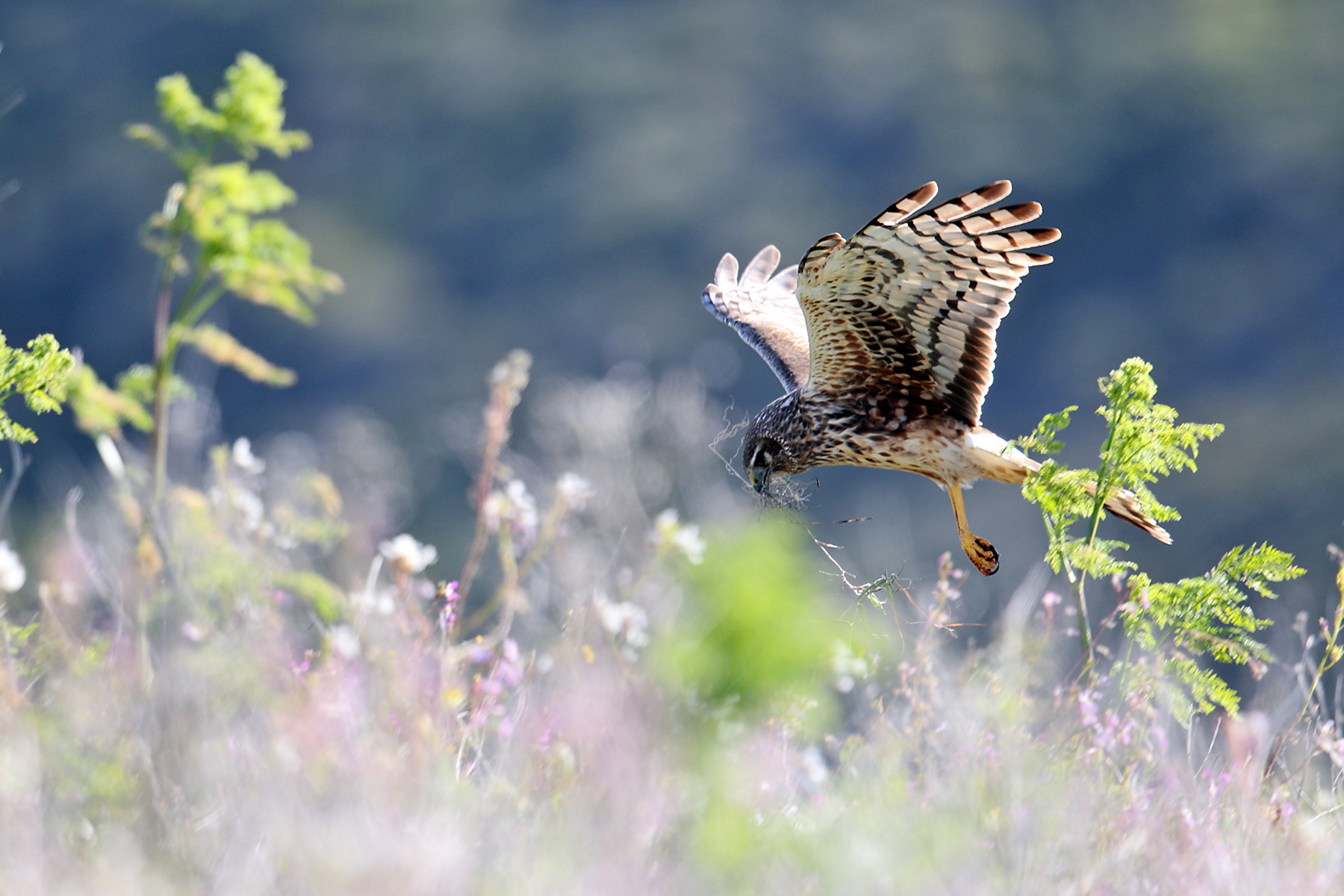 Both parents dive-bombed me quite a bit the few times I checked the nest but they never actually hit me with their feet or talons. Some birds of prey will strike, and some can do serious damage. The pioneering English bird photographer Eric Hosking lost an eye to a Tawny Owl (and later wrote a book with the amusing title “An Eye for a Bird”). This is the female turning to come at me: 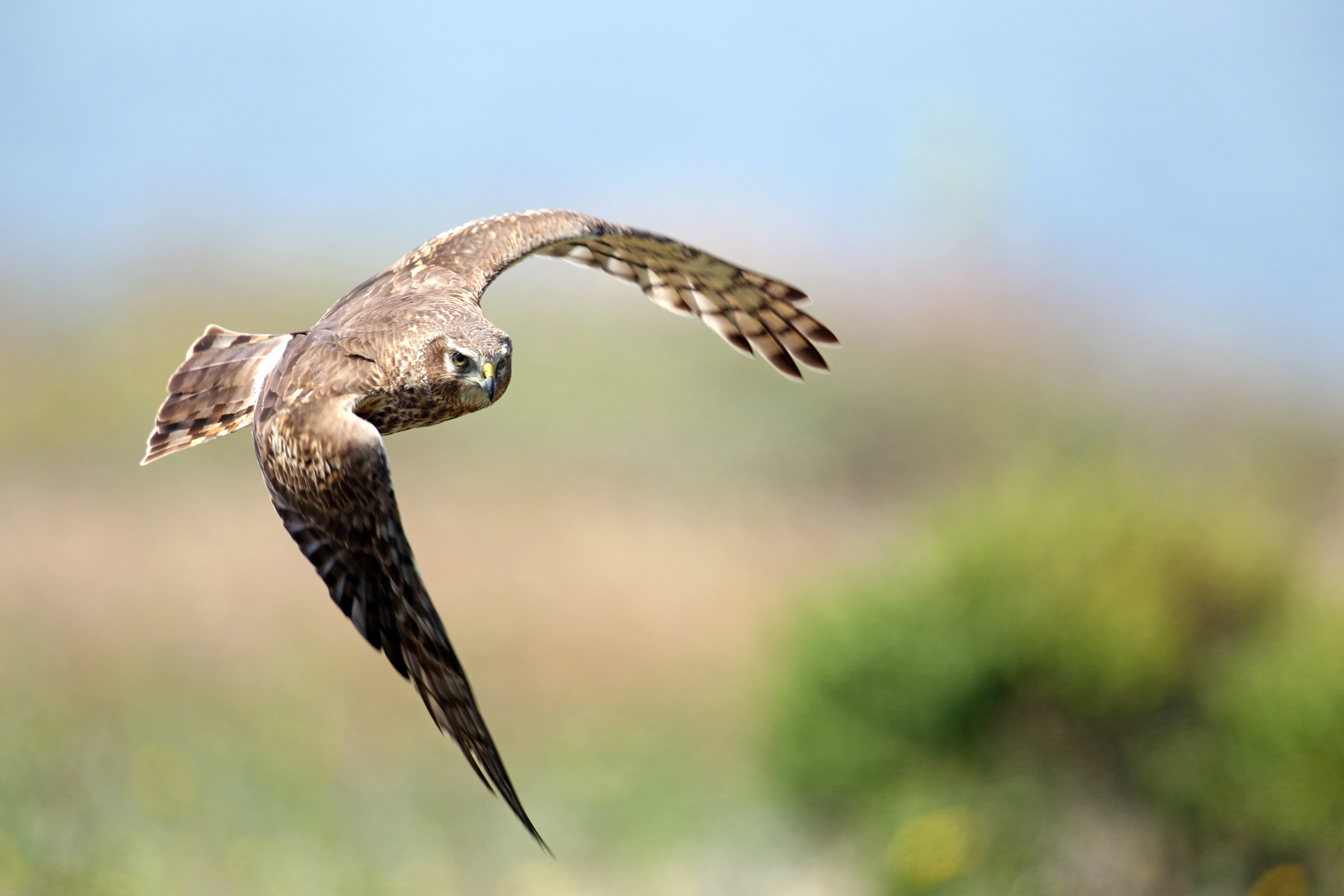 Female threatening with her feet: 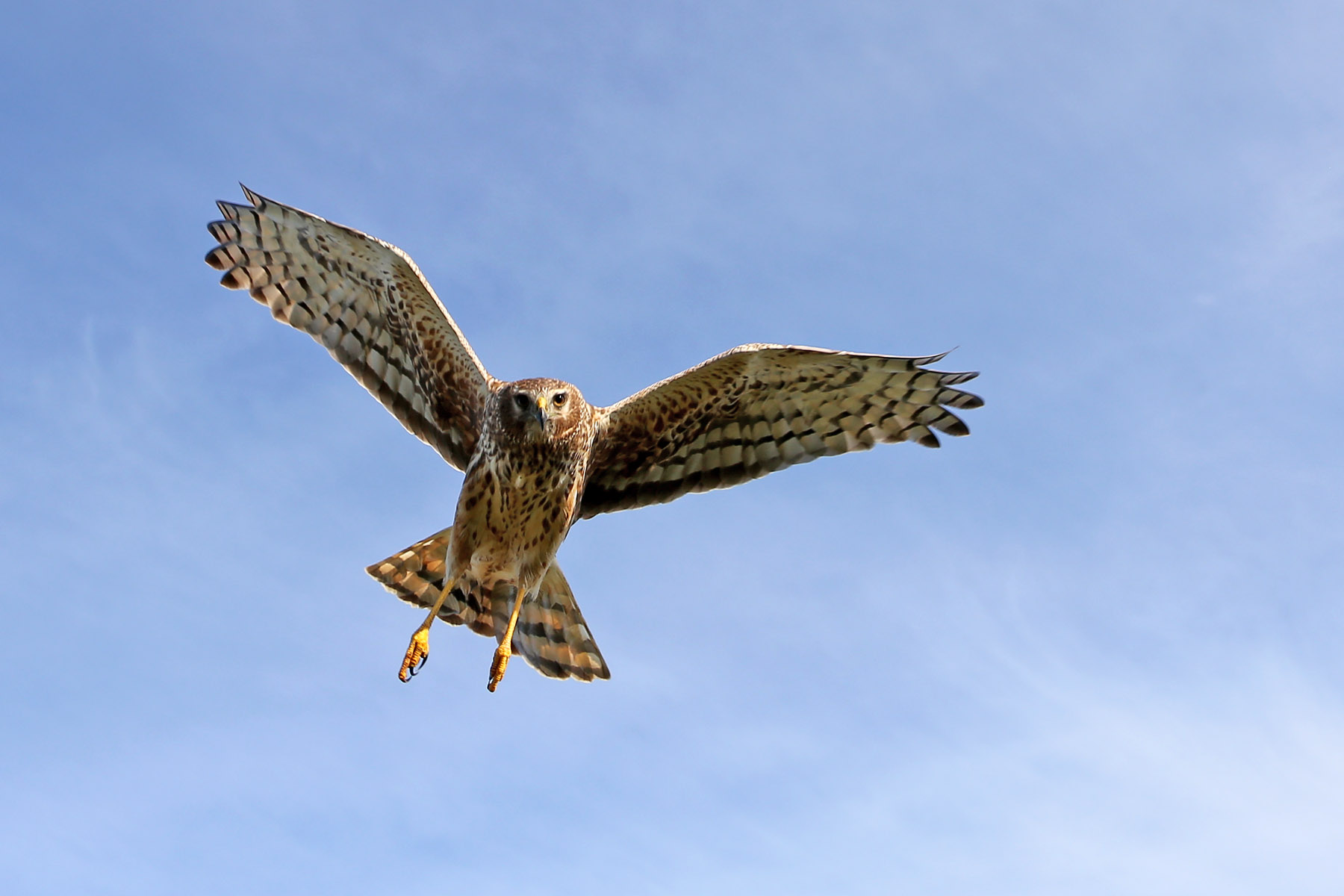 Below: The male on his favorite perch. This species is quite dimorphic in plumage coloration—females are a lovely warm brown color while males have a pearly gray plumage coloration. I see mostly female plumage birds along the coast north of Santa Cruz and have often wondered if the sex ratio is really biased. In a related species in Europe (Marsh Harrier) it was recently discovered that some males bear female plumage their entire lives so I now wonder if something similar could be going in Northern Harriers. (Sternalski et al. 2011. Adaptive significance of permanent female mimicry in a bird of prey. Biology Letters 8:167-170). Spoiler alert: males with female plumage are treated with reduced aggression by territorial males in full male plumage. 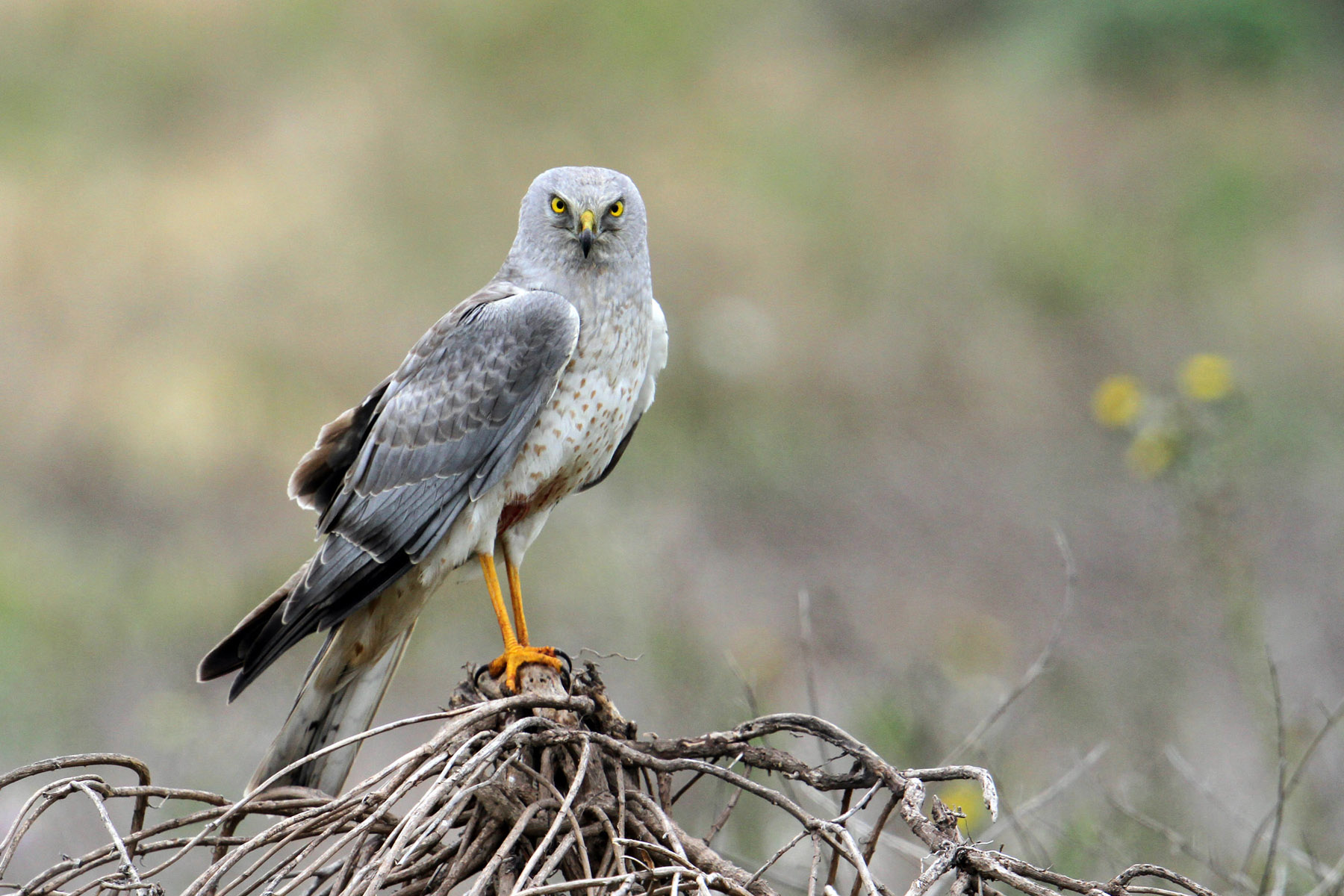 Male leaving the perch to come and voice his concern to me: 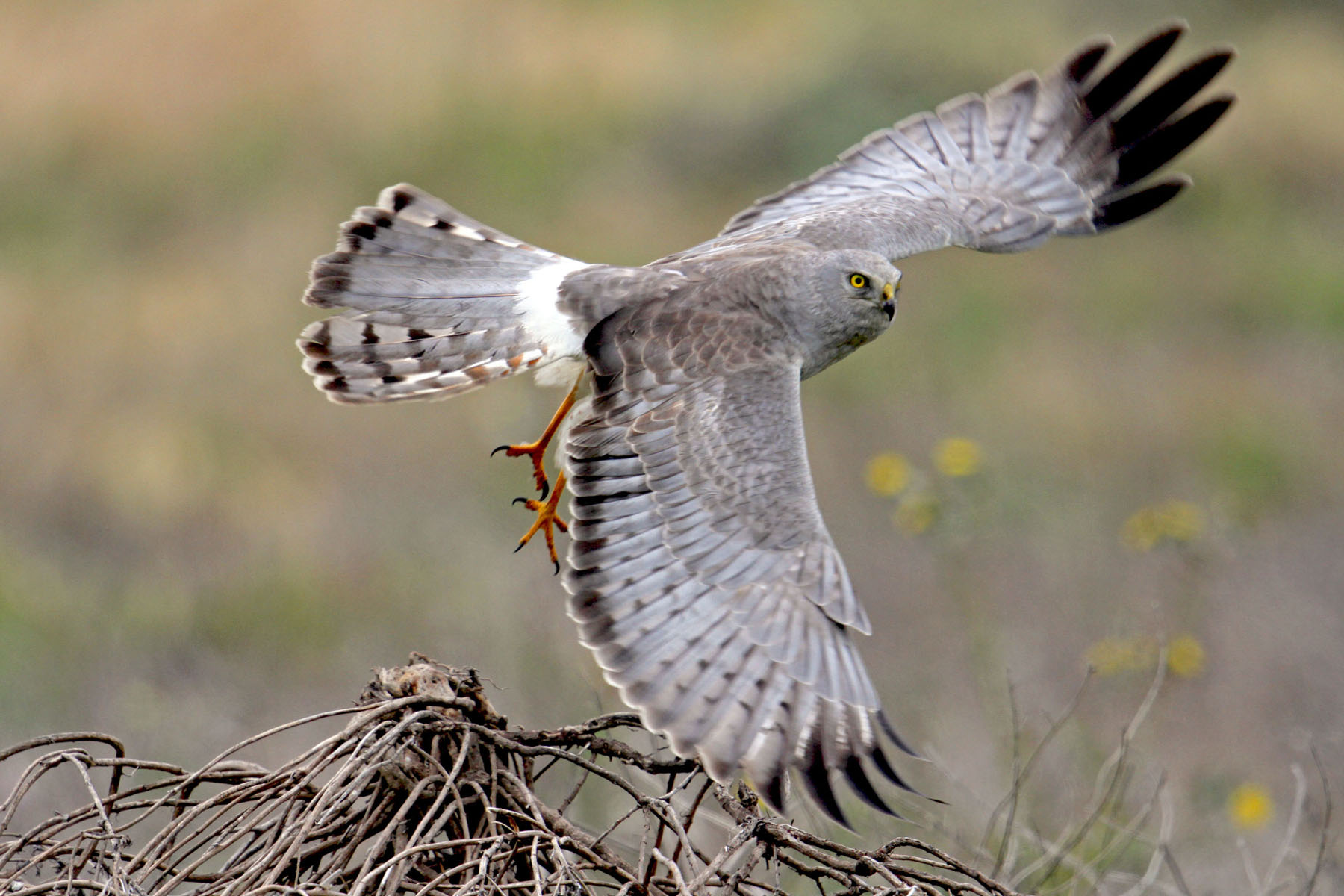 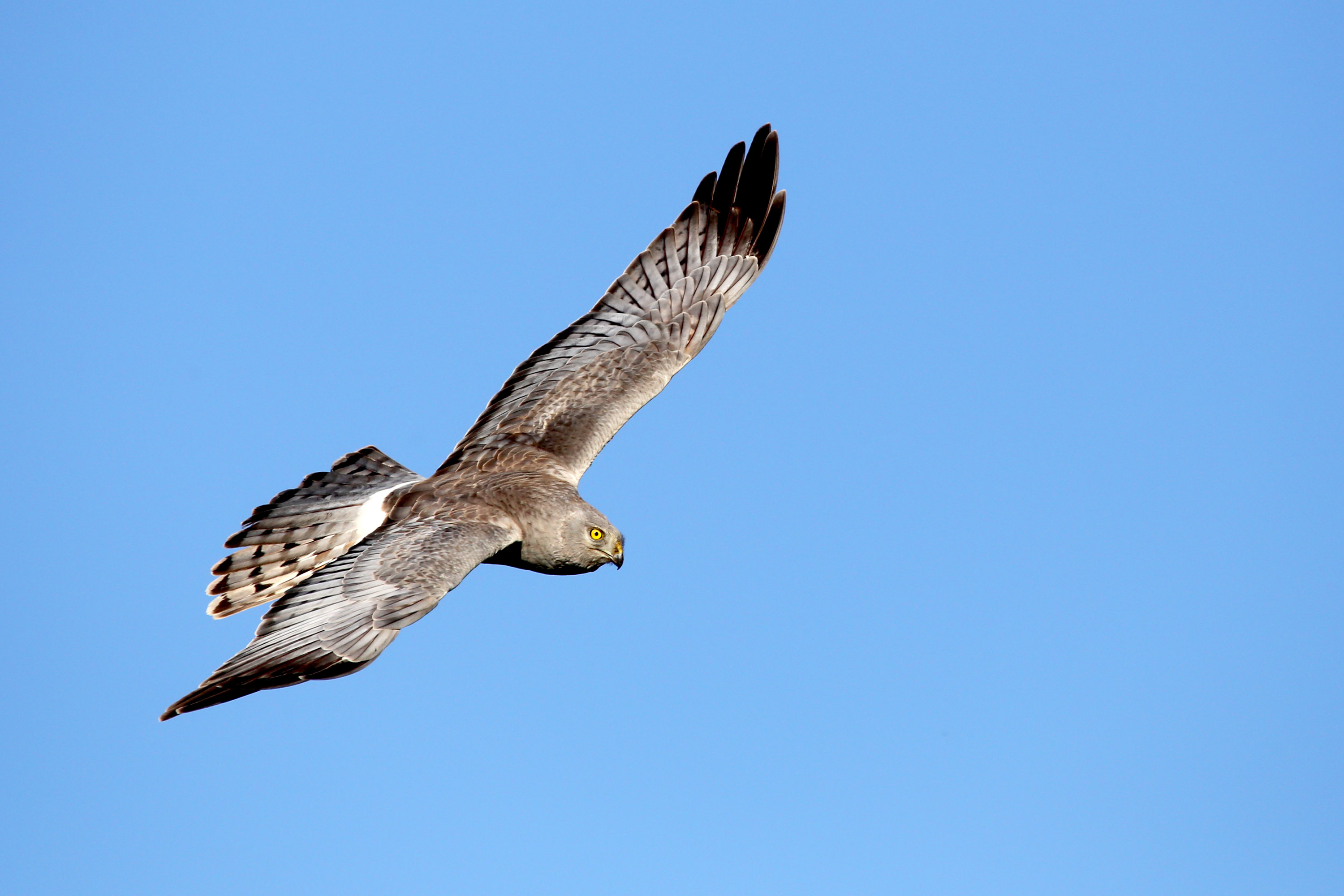 Male coming in for a landing: 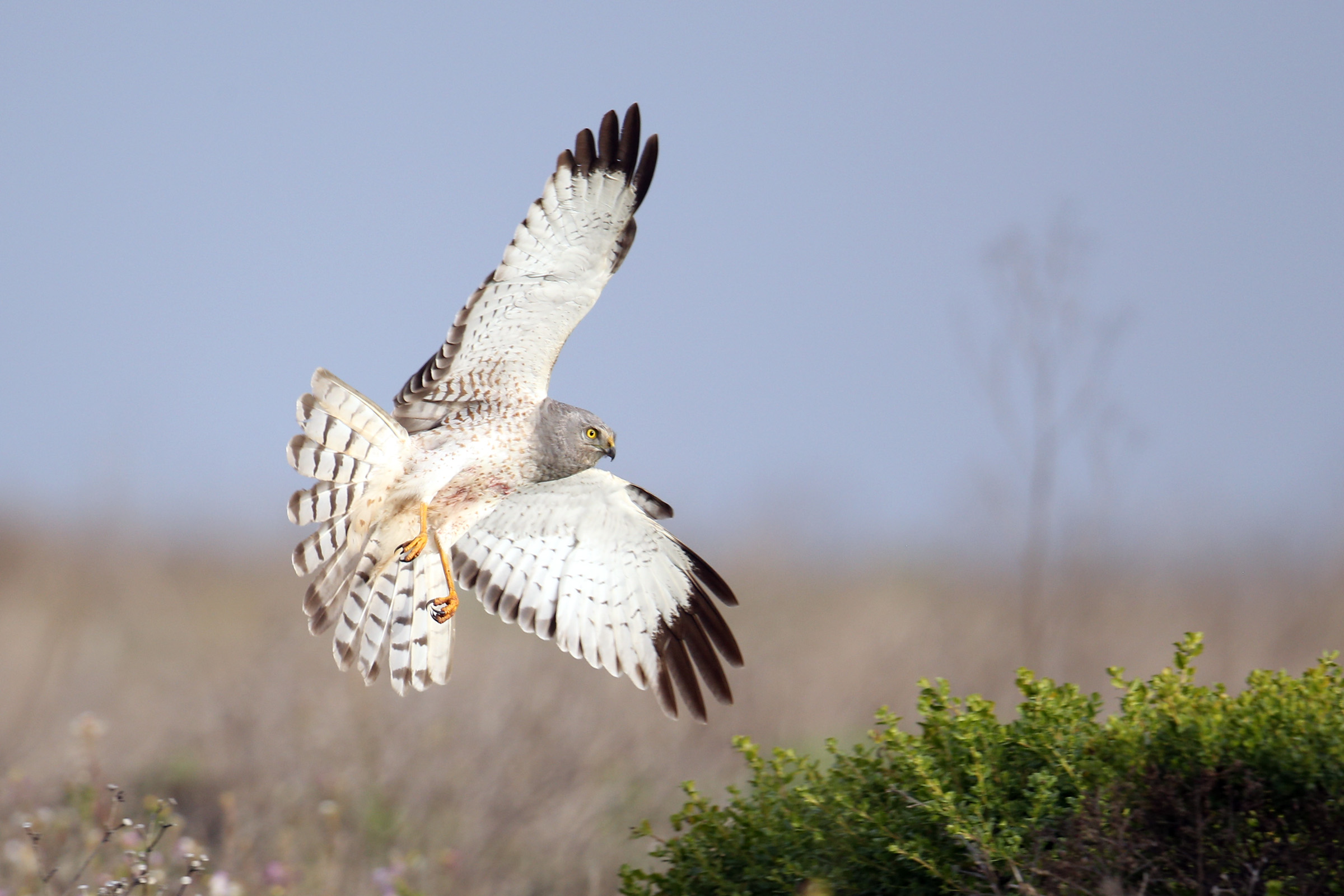 Below: Harriers have facials ruffs (or disks) that make them seem like half hawk, half owl—the resemblance seems to be an example of convergent evolution. Like many owls, harriers can accurately locate prey entirely by sound cues and their sound-reflecting facial ruffs are similar to those found in owls. Bill Rice, now well known for his experimental evolution studies with Drosophila, did his PhD work on harriers and showed that (1) in the lab harriers are as accurate as many owls in locating sounds, and they are far more accurate than other hawks, and (2) wild harriers in the field can accurately target mouse-like sounds emitted from hidden speakers (“mouse-like” because Rice made the sounds himself after practicing to sound like a Microtus vole). Rice WR 1982 Acoustical location of prey by the marsh hawk: adaptation to concealed prey. Auk 99:403-413.
The facial disk  of the female (left) of my pair was much more distinct than the male (right) but this may be due entirely to contrasting color of the egg of the ruff on the female. According to species accounts for harriers, the brown eyes of this female means she is a young bird (one year old); older females have yellow eyes: 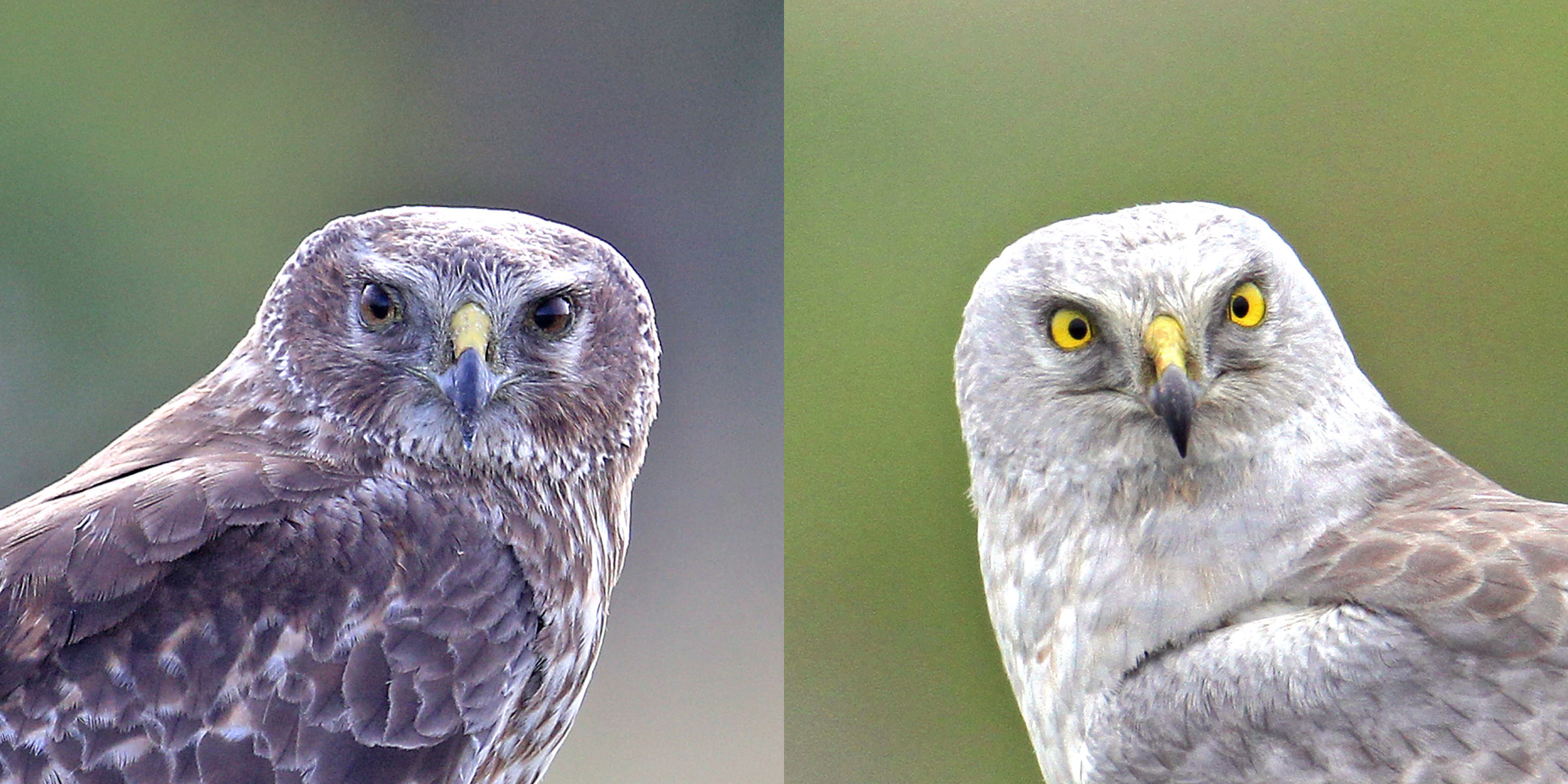