This report comes from the February 2 issue of the Guardian, but it’s likely to still be accurate—or even worse. The article reports on a survey by the online magazine Spiked of how much censorship of speech occurred at 115 British universities; that is, whether speech was suppressed even more severely than the law mandates.

This isn’t just an off-the-cuff survey; as the Guardian notes, the rankings “were overseen by Professor Dennis Hayes, head of the centre for educational research at Derby University and Dr Joanna Williams, senior lecturer in higher education at Kent university – show each university administration and students’ union graded green, amber or red based on an assessment of their policies and actions. Institutions have been given an overall ranking based on the two combined.”

Here are the Spiked ratings, in alphabetical order by category, with a key (if you go to the site, you can click on each diamond and see the reasons for the university’s ranking).  Note that the Guardian mentions that some ranking criteria may be a bit wonky. 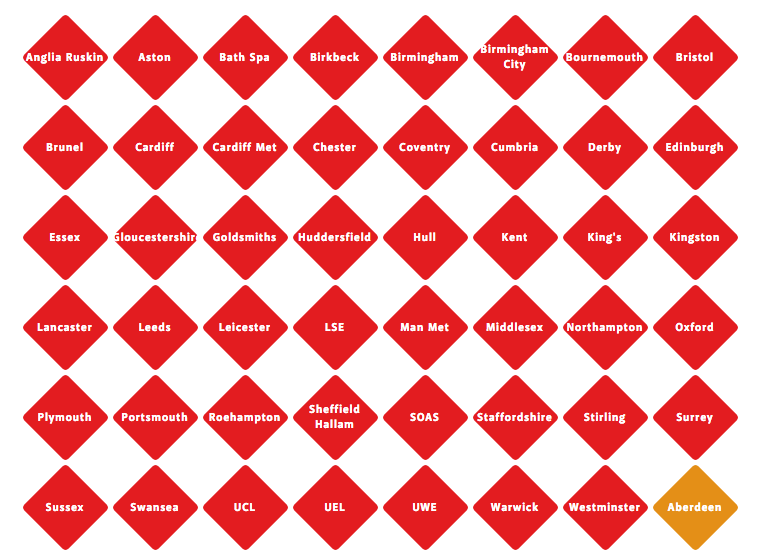 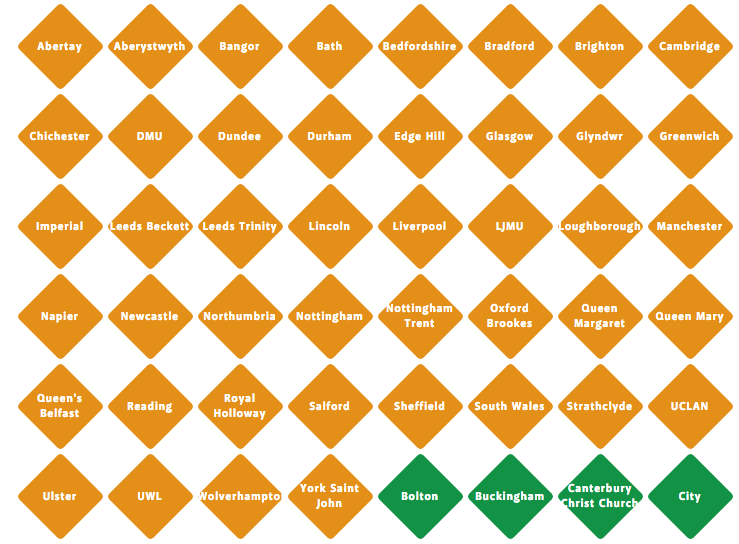 That’s four out of five universities with some speech restrictions beyond the law, and that’s sad. A few examples from the article:

This one really gets me for its blatant hypocrisy (my emphasis).

Now why is Oxford in red? Spiked says this (more details are given at the page):

The University of Oxford and the Oxford University Students’ Union and its constituent colleges collectively create a hostile environment for free speech. The university, which has received an Amber ranking, restricts ‘offensive’ and ‘needlessly provocative’ speech as part of its Free Speech and Bullying and Harassment policies. It also bans the publishing of racist, sexist or homophobic material using university computer services and banned a controversial debate on abortion in 2014. The students’ union, which has received a Red ranking, places restrictions on pro-life groups, and the common rooms have, collectively, disbanded a rugby team, lobbied the Oxford Union to rescind a speakers’ invitation and banned ‘Blurred Lines’.

And why is Cambridge amber? It’s not the administration, but the students, who have also banned the Sun:

The University of Cambridge and the Cambridge University Students’ Union collectively create a chilling environment for free speech. The university, which has received a Green ranking, holds no substantial restrictions on speech, other than a minor restriction on ‘offensive’ emails. The students’ union, which has received an Amber ranking, places restrictions on ‘aggressive’ and ‘disrespectful’ speech in student meetings and uses an inflated definition of sexual harassment that could be used to restrict speech and opinion. The students’ union has also banned the Sun newspaper. Due to the severity of the students’ union policies and actions, the institution’s overall ranking is Amber.

Finally, who’s doing the censoring? As in the U.S., it seems to be largely the students. The Guardian notes this:

In fact, Spiked’s rankings show it is not usually university managements that are behind outright censorship on campus: only 9.5% have done so, according to the research. By contrast, 51% of student unions have actively censored certain types of speech or instituted bans. “Students’ own representative bodies are far more censorious than universities,” says Slater. [Tom Slater, assistant editor of Spiked].

Students are also responsible for the amber ranking of the University of Manchester, but I won’t embarrass Matthew with the details. I can only imagine what would happen, both in the U.S. and U.K., if students ran the universities.

33 thoughts on “Free speech on the wane in UK universities: only 20% of them don’t impose censorship”