Everybody knows that the only warm-blooded (“endothermic”) animals—animals that can keep their entire body temperature well above ambient temperature—are birds and mammals. But many of you probably know that some animals, like lizards and turtles, can gain the advantages of endothermy by raising their blood temperature via basking in the sun.(There are speculations that some of the dinosaurs were truly warm-blooded, but we don’t know for sure.) Others—most notably fish like tuna, some sharks, and swordfish—can raise parts of their bodies above ambient temperature by generating heat from metabolism, usually in the muscles. Insects like bees can do the same, but only when flying or buzzing their wings.

The advantages of endothermy are many. Because the body is basically a giant chemical reactor, low temperature slows down everything, including your speed and your ability to function over a range of environmental temperatures, and thus to escape predators and find mates and food. Your rate of digestion is also higher. But of course there are costs, too, which probably explains why many species haven’t evolved it and remain “ectothermic,” or cold-blooded. Sometimes there’s no need to keep your body temperature above ambient, or you can do it behaviorally rather than metabolically (lizards bask in the sun, some fish make sporadic visits to the water surface to warm up).

As I said, fish like tuna and swordfish can keep parts of their body, like the muscles, above ambient temperature, but the body core, including the crucial heart, cannot be kept warm, and that severely limits their activity and ability to function at low temperature. (After all, your heart rate determines the rate at which blood gets to the rest of your body.) But now, according to a new paper in Science by Nicholas Wegner et al. (link and free view below), there is at least one species of fish that is truly warm-blooded, keeping its entire body temperature 5 °C or so (9° F) above the water temperature. This is the opah (Lampris guttatus), the fish shown below. 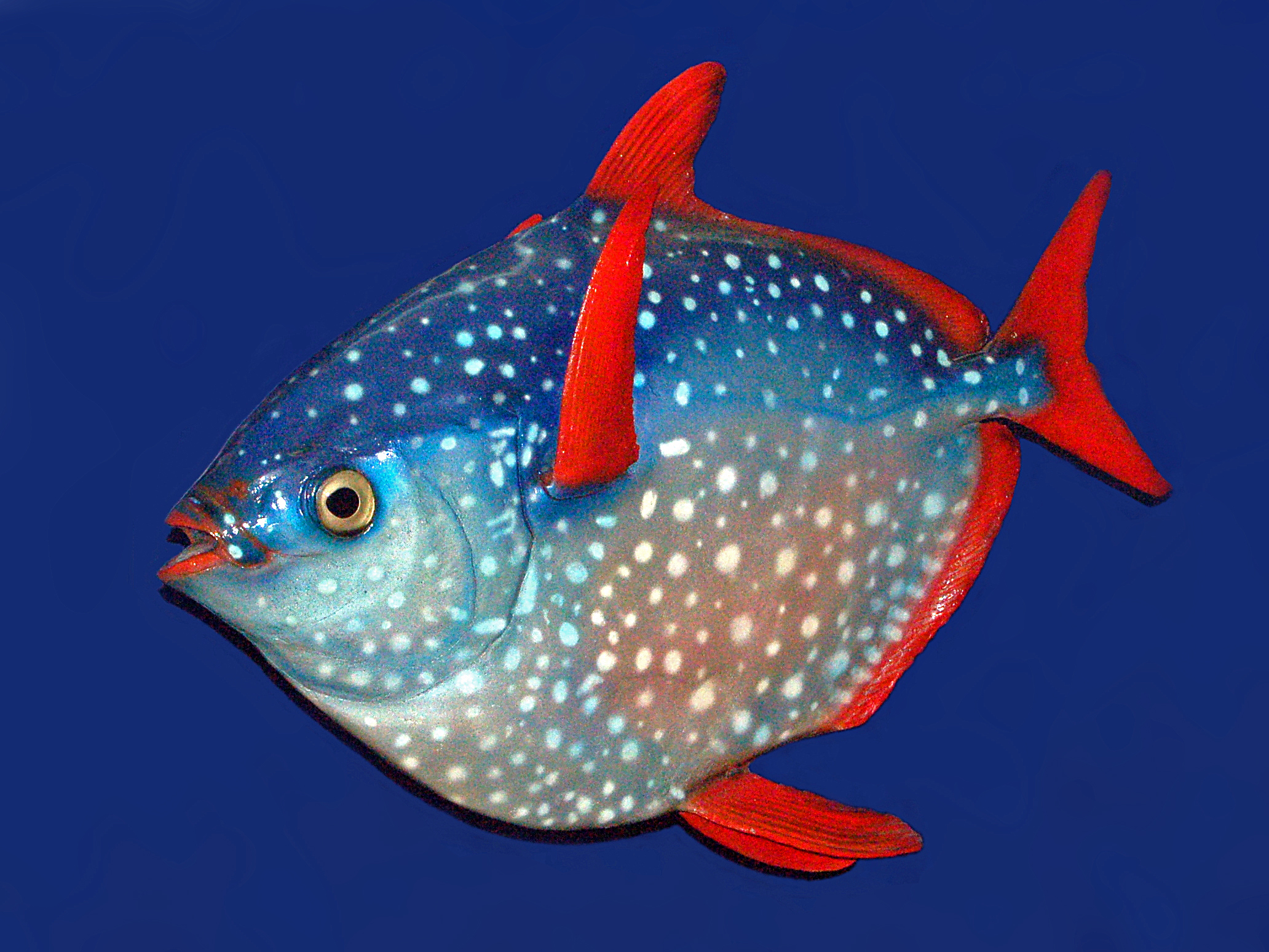 The opah is distributed worldwide, and is “pelagic”, swimming in the open ocean from the surface to several hundred meters down.  It’s a big fish that can reach 2 meters long and weigh 600 pounds.

The authors discovered, by implanting thermocouples in swimming fish, that the opah keeps its body temperature well above ambient, even in cold waters. The diagram on the left shows the thermal profile of a opah swimming at 10.5 °C. The thermocouple measurements show that its entire body is above ambient temperature, and the crucial core is about 4 degrees above ambient. Note that the fish is warmest around the eyes, something also seen in billfish. It may be due to movements of the eye muscles.

On the right you see a diagram of the temperature of the fish’s pectoral muscles (a small, 39-kg specimen) as it dives to different depths up to 100 m (right scale). Although the ambient temperature of the water varies from 18°C at the surface to about 9.5 °C below 50 m, the body temperature (red line) stays between 13 and 14 degrees.

The interesting thing is how the fish does this. It requires several adaptations involving behavior, morphology, and physiology.

The main problem with a fish trying to conserve body heat is its need to oxygenate its blood by bringing blood vessels in its gills close to the water (the oxygen source). That, of course, cools down the blood severely. The oxygenated but cold blood then flows back to the fish’s core, cooling it down.

The opah has three ways to overcome this problem. First, it generates a lot of body heat by swimming forward not by undulating its body, as do most other fishes, but by vigorous “rowing” of its pectoral fins (see the video below). That generates a lot more body heat than does undulation.

Second, and most striking, the opah has evolved its circulatory system into a system of heat conservation called “countercurrent heat exchange.” If you think of the blood vessels in the gills as a series of pipes, the opah has “cold water” pipes running away from the gills, containing cold oxygenated blood, that lie side-by-side with “hot water” pipes running from the body toward the gills. Their proximity allows the cold blood flowing toward the body core to be warmed by the muscle-generated heat; all of it keeping the blood and body temperature higher than ambient.

In the right picture below (“C”), you can clearly see the proximity of the two types of vessels. The blue ones are the “afferent” vessels coming from the body to the gills (don’t be fooled by the color; the blue ones have warm blood), while the red vessels are the “efferent’ vessels containing oxygenated but cold blood coming from the gills. You can see that they’re interspersed, like like side-by-side wires. The temperature differential thus allows heat transfer from the blue vessels to the red ones. This arrangement is called the retia mirabilia (“wonderful net”), which is also seen in other fish that can keep parts of their body above ambient temperature.

Third, as you see on the left (“B”), the gill arches, where the blood gets oxygenated and chilled by the water, and which contains the retia mirabilia, is insulated from the rest of the body by a thick layer of fat (“adipose tissue” in the diagram). This further insulates the body from the cold blood, allowing it to be warmed up before it leaves the gill arch:

Here’s a video (some of it taken from a video in the Science paper) showing the opah swimming with its pectoral fins.

Here’s a big advantage of being an endothermic fish. The diagrams below show the percentage of time that various specimens of opah and albacore tuna spend at various depths in the water (dark bars at night, light bars during the day). The figures at the top show the percentage of time that each species spends above 50 meters. You can see that at night it’s only 31.2% for the opah but 89.1% for the tuna, with a similar disparity during the day (but with both fish going lower during the day.  Most important, the opah is able to forage much deeper than the tuna, almost certainly because its higher both temperature allows it to dive deeper without losing mobility, digestive capacity, and metabolic activity. 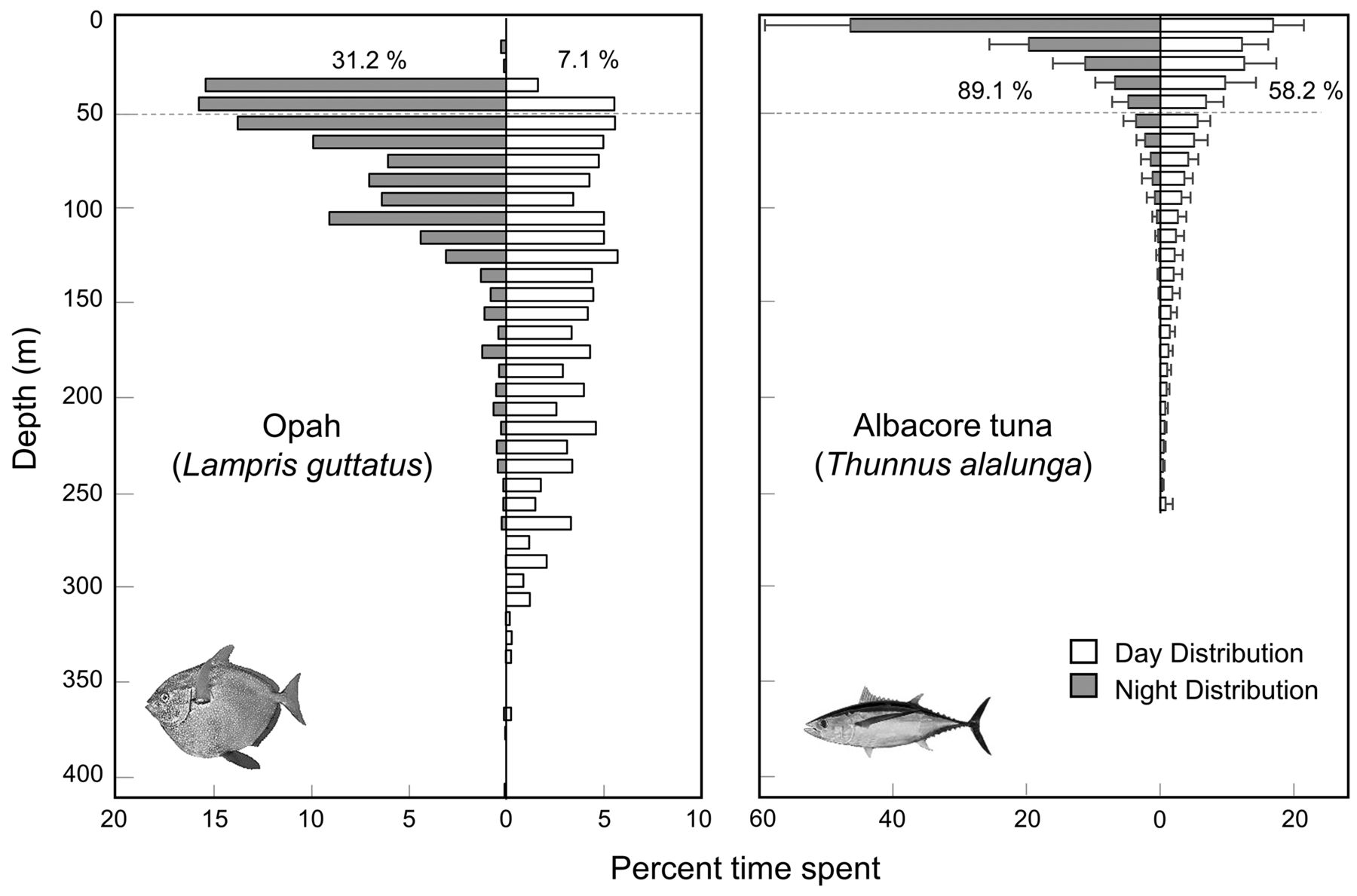 It’s almost certain that this one species of opah is not unique, and the authors say that other species in the group should be studied. I suspect that these innovations were present in the common ancestor of the group, and so we should find other endothermic fish. Further, it’s hard to even find this adaptation in any fish, for that requires putting thermocouples into individuals and monitoring their body temperature while they’re swimming (the opah in this study was tethered to a surface float so it could be retrieved).

Finally, why don’t more fish do this? As I said, for some fish it’s undoubtedly not an evolutionary advantage to keep a high body temperature, as they probably do just fine swimming near the surface, or, if found in the depths, have adapted in other ways to cold temperature (and darkness). Alternatively, the requisite mutations for warm-bloodedness might simply not have occurred in other species, even if they would be beneficial.  We don’t know the answer to these questions, but we can at least find out how many fish have adapted a quasi-mammalian/bird-like system of keeping their temperatures high.