Two days ago I wrote about the recent Pew report showing a decline in American Christianity (curiously, evangelicals aren’t declining nearly as much as mainline Protestants and Catholics), as well as a marked rise in the proportion of atheists, agnostics, and “nones,” with “nones” being those lacking formal affiliation to a church.

Over at the New York Times, David Leondhart dissected the data further, taking out, that portion of the “nones” who don’t find religion important to them, and lumping that moiety together with declared atheists and agnostics. The total gives the proportion of living Americans in different age classes who can be considered serious non-theists. And that total is impressive: it’s a quarter of the millennials—those born after 1980! Assuming that religosity doesn’t markedly increase as one gets older (and the data suggest the opposite), and further that millennials won’t turn to faith when they age, this means the country is getting more secular. As Leondhart notes, even the cross-sectional data, using all Americans, shows this trend over the last seven years:

The chart here is another way to think about the trend. Pew asks Americans what their religion is and gives several choices for people who don’t identify as belonging to one. One choice is “atheist,” another is “agnostic” and a third is “nothing in particular.” Among people who give that last answer, Pew also asks whether religion is important in their lives.

To create a larger category of the nonreligious, I’ve combined atheists, agnostics and people who said both that they didn’t belong to a religion and that religion wasn’t important to them. This group made up 15.8 percent of the United States population in 2014, up from 10.3 percent only seven years earlier, according to Pew. 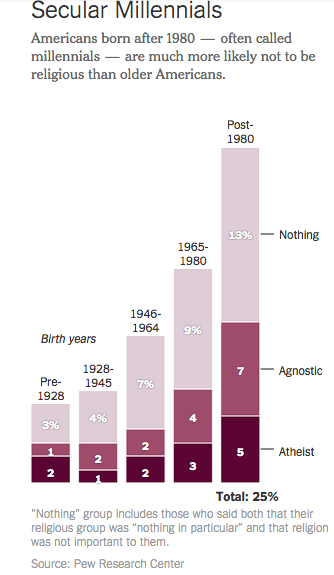 The article also notes that younger people probably won’t become more religious as they age, as the trend has been in the opposite direction. Thus the bar chart likely gives us an overview of what is happening to Americans as a whole.

What’s palpably clear from both the Pew report and this data is that, bit by bit, religion is losing its hold on America. As Dan Dennett notes, this trend could be reversed if some cataclysm drives people back to religion (plenty of evidence suggests that religiosity is negatively correlated with Americans’ feeling of well-being), but let’s hope things go well. Income inequality is strongly correlated with religiosity in the U.S. (as it increases, so does religion), so there are at least two ways a Republican president in 2017 could derail this trend.

34 thoughts on “The rise in secularism: 25% of “millennial” Americans are atheists, agnostics, or don’t see religion as personally important”