JAC: We met Dorsa Amir a while back when she sent us photographs of the Barbary macaques she worked on in Morocco’s Atlas Mountains (she also sent a photo of her orange tomcat Emerson). She recently called my attention to Amy Cuddy’s popular TED video on “power posing”, as Cuddy’s conclusion about hormones and behavior is relevant to Dorsa’s thesis work. Not only that, but Cuddy’s talk, now up to 25,758,838 views, is the second most popular TED talk of all time. But, referring me to an analysis on another site, Dorsa told me that Cuddy’s conclusions were dubious—or at least non-repeatable. I asked her to write a post about it, which is below. I’ve also put in Cuddy’s talk, which I recommend you watch, so you can see her claims and how much the audience loved it.

I’m a PhD student in biological anthropology at Yale University. My research interests include the physiology and psychology of contemporary humans, with a focus on small-scale societies. I spend my summers in South America with the Shuar of eastern Ecuador, as part of the Shuar Health and Life History Project
Personal site: www.dorsaamir.com

Pulling the Plug on Power Posing

If you’ve seen just one TED talk, I would bet it’s called “Your body language shapes who you are” by Amy Cuddy, now an Associate Professor at Harvard Business School. This is a pretty safe bet, for in the three years since its release, Cuddy’s talk has racked up more than 25 million views, making it one of the most popular TED talks of all time.

In the talk, Cuddy presents data from her 2010 article in Psych Science which makes the following claim: by simply changing your posture to a “high-power” pose (i.e., taking up more space and opening your limbs), you can instantly trick your body into thinking it’s more powerful. The authors tested this claim by having 42 participants give saliva samples, engage in either a high-power or a low-power pose for two minutes (depicted below), then give another saliva sample.

The saliva tubes were then sent off to a lab and analyzed for two specific hormones: testosterone and cortisol. Interestingly, the power posing appeared to have a significant effect on hormone levels: high-power poses were associated with a rise in testosterone and a drop in cortisol, and low-power poses with the opposite. So not only did the posing make you feel more powerful, it also made your body more powerful by fiddling with your hormone levels and making you literally embody that power.

So why are we talking about a video from three years ago? Well, in a blog post on Friday, the talented folks over at DataColada tackled the evidence supporting power posing. As it turns out, as shown in a recent paper in Psych Science, the power posing effect doesn’t seem to replicate. I suggest checking out the full blog post for details, but here are their main points:

As the bloggers claim, “if studies only get published when they show an effect, the fact that all the published evidence shows an effect is not diagnostic”. So what you can do, and what they did, is run a fancy statistical method called a p-curve analysis; a method that lets you rule out selective reporting as the only explanation for a set of significant findings.

Check out the two example graphs below, comparing a good to a bad p-curve. On the X-axis is the p-value reported in any one study, and on the Y-axis is the percentage of studies that have that p-value. This lets you compare p-values for the same experimental protocol across many studies and see what the curve looks like. You want a right-skewed curve because that indicates that proportionally more studies are reporting effects that are significant at lower values. So, if power posing is real and effective and robust, as assessed in 33 separate studies, you should see a right-skewed p-curve. You don’t want to see a flat curve, because that means that all the different p-values are equally likely to occur. 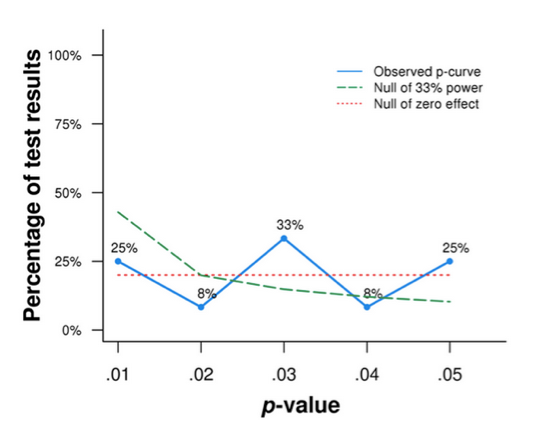 We see not the right-skewing that would convince us that this is a real effect, but rather a flattish curve that should make us question the finding.

The DataColada folks conclude, “At this point the evidence for the basic effect seems too fragile…to advocate for people to engage in power posing to better their lives.”

I’d like to take a minute here to add my two cents. In our lab at Yale, my colleagues and I spend a lot of time thinking about hormones—our lab meetings are affectionately referred to as “Hormone Happy Hour”—and we spend a lot of these meetings discussing the relationship between hormones and behavior. As it turns out, hormones, like everything else in biology, are kind of complicated. While testosterone and cortisol have been implicated in basically every human behavior, let me share the basics. Testosterone plays a big role in male development by turning baby boys into pubescent boys, and in adulthood it makes muscles and semen happen. There’s no clear evidence that testosterone contributes to variation in aggression between individuals, but it’s likely to contribute to differences in aggression between the sexes [1], and there’s really good evidence that it helps you build big muscles[2,3]. Cortisol, contrary to popular belief, doesn’t cause stress, it’s just a response to stress: when your body senses that it’s in need, cortisol increases the amount of glucose in your bloodstream so your cells can have greater access to energy.

In general, hormones like testosterone and cortisol are dynamic. Both hormones have a diurnal rhythm, which means they change throughout the day. They’re also influenced by dozens of variables: the obvious ones like age, sex, and weight help determine clinical guidelines for what “normal” levels look like. One big problem here, though, is that if you look at men from different populations, such as hunter-gatherers, their absolute levels of both testosterone[4] and cortisol[5] are sometimes almost half of those found in American men.

Why is all this relevant to power posing? Well, there are three main points to be made: (1) hormones have complicated effects on behavior, (2) hormones often change throughout the day, and (3) the density and affinity of hormone receptors are potentially just as important as absolute hormone levels (excellent evidence here). How did Cuddy and colleagues control for these phenomena? In short: they didn’t. They took two saliva samples, prior to and following the manipulation, and attempted to control for diurnal rhythm by scheduling testing in the afternoon – a massive six hour window that stretched from 12:00pm-6:00pm. Due to the dynamic nature of cortisol, the standard cortisol assessment protocol generally involves something like two samples a day for 2-3 days. This means cross-sectional samples, like the one in the power posing study, must be analyzed with a grain of salt.

The best way to address the question of whether or not changes in hormone levels caused by the treatment are in turn causing a change in behavior is to run a mediation analysis. This is a method in which you try to test causality among three variables; in this case, you’d want to see that changes in hormones are mediating, meaning causally linking, high-power poses to more confidence. You don’t necessarily need to know all the details of this method (more info here), but the basic point is that the authors, for some reason, do not include this simple test in their paper. Without knowing what people’s hormonal profiles look like (by taking several samples across many days), it’s really hard to say whether or not you’re measuring a “trait” difference or a “state” difference.

37 thoughts on “Guest post: Pulling the Plug on Power Posing”