Even though 2015 is not even half over, I’m already going to present two yearly awards. Professor Ceiling Cat’s “George Orwell Award for Defense of Free Expression” is going to Nick Cohen, whose work, pretty new to me, must be well known to many UK readers. The other award, the “H. L. Mencken Award for Mockery of Religion,” goes to Atlantic writer and Russia correspondent Jeffrey Tayler, whose weekly articles in Salon (of all places) take religion apart with the opprobrium it deserves.

I call your attention to Tayler’s latest Sunday sermon: “Ted Cruz, our ayatollah: Fight back now, or welcome to the 2016 religious right hellstorm.” This latest piece, nominally a response to a critique of an earlier Tayler piece by goddycoddler Matthew Barber, is really Tayler’s long expression of amazement and disdain for how thoroughly marinated American politicians are in toxic faith. And I’ll give three excerpts showing the Mencken-like straighforwardness that has earned Tayler his award:

Accusations of “bigotry,” trotted out with the intent to silence, should still the tongue of no outspoken atheist.  We attack not religious folks as people, but the irrationality inherent in their religion, which is nothing more than hallowed ideology, and therefore is, or should be, as much fair game as, say, socialism.  Would Evangelicals heed calls to “respect” Vermont Senator Bernie Sanders (who has just announced his candidacy for 2016) and avoid engaging in “anti-socialist” bigotry with regard to his political views?  Of course not.  Nor should they, necessarily, if they disagree with him.  Being a socialist, just like being a Christian, is a matter of choice, save one important fact: at least socialism constitutes a coherent ideology to which nothing resembling the benighted principle of“Credo quia absurdum” (I believe because it is absurd) has ever applied.

The Latin quote, I believe, is from Tertullian, channeled through Kierkegaard. Another:

I chose the term “faith-deranged” with care.  I meant it literally, lest there be any doubt that I intended to be merely incendiary.  Derangement is clearly rampant across large swathes of America.  Citizens of one of the most technologically advanced nations on earth who opt, of their own volition, to believe in a magic book negated by science and peppered with all manner of bilious behests and misanthropic myths cannot be esteemed to be thinking sanely.  Given the extreme nature of the delusions of these citizens and the resulting behavior – for example, petitions whispered to an invisible celestial tyrant with the goal of securing favorable outcomes, otherwise known as prayer, and hallucinated responses from said invisible tyrant – only one conclusion presents itself: faith has disrupted their mental faculties and is producing symptoms that, were they not sheltered under the adjective “religious,” would qualify as pathological.

But there’s some optimism at the end:

Rationalists must resist all calls to show respect for religion, be it Christianity or Islam or any other faith with universalist pretensions.  Recall the damage these stultifying ideologies of control and repression have done the cause of progress throughout history.  And remember the stakes now, with so many of our presidential candidates flaunting their belief, and seats on the Supreme Court likely to free up, especially post-2016.  We either fight back by speaking out now, or we may end up living in a Christian-theme-park version of Iran, with Ted Cruz as our ayatollah.

Yet do not despair!  In the United States the winds of reason are blowing more strongly than ever: since 2012 alone, 7.5 million have abandoned religion.  We atheists have the momentum.  Finally, finally, we can make out religion’s “melancholy, long, withdrawing roar.”

Those sleeping the slumber of faith hang DO NOT DISTURB signs about their minds.

No rationalist should feel obliged to comply.

Congrats to Tayler on his prize. He can stop by my office anytime to pick up his award: a specially autographed copy of FvF with a Russian-speaking cat drawn in it, and a fine Cuban cigar.

p.s. Tayler, on his Facebook page, posted this statement from Dan Barker: 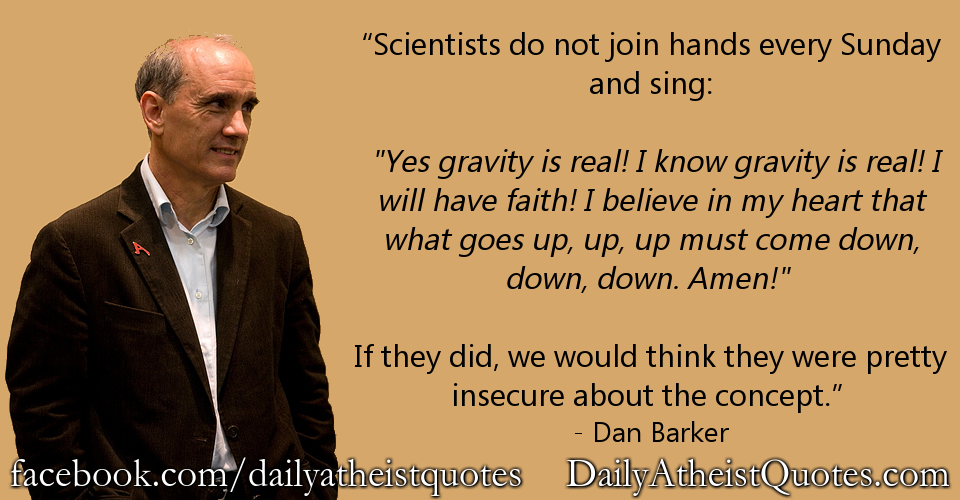