The evolution of flight in birds must have involved many dead ends, including all those dinosaurs with feathers that never evolved to the flying or gliding stage, or even the flying lineages that went extinct—like all dinosaurs except the single lineage that produced modern birds—when the asteroid whacked us at the end of the Cretaceous. A just-discovered species of dinosaur, described in a new paper in Nature by Xing Xu and colleagues (reference and free link at bottom), was almost certainly one of those failed experiments in flying or gliding.

The species is remarkable for two things. First, instead of having feathered forelimbs like the early ancestors of birds, it had a naked membrane stretched between the digits of its forelimbs and its body. (It did have feathers, but not on the wing membrane.) In that way it was like bats or pterodactyls. But pterodactyls weren’t dinosaurs, and so this finding, which is a winged theropod like its feathered cousins, is unique.

Further, the beast had a long bone which was an evolved extension of the wrist bone: a bone that almost certainly supported the wing membrane and, in the fossil, appears connected to that membrane. This, too, is unique in dinosaurs, but can be seen in other flying or gliding creatures like “flying” squirrels (they don’t fly, of course, but glide), the gliding marsupial “squirrel,” the ankles of some bats, and the pterosaurs. (Do recall that the “radial sesamoid” of the panda—the “panda’s thumb” made famous by Stephen Jay Gould, was also an extension of the wristbone that helped the panda strip leaves from bamboo.)

Sadly, only one specimen of this beast was found, and it’s missing the rear bits, including the crucial tail, which could have given us some information about how it glided or flew. In fact, we have no idea whether this one glided, flew, or both.

The species was named Yi qi (surely the shortest species name we have), which is Mandarin for “strange wing,” and is pronounced, according to the authors, “ee chee.”  Here’s the one specimen they found in China, dating from the Upper-middle Jurassic (ca. 160 million years ago). The scale bar at upper left is 2 centimeters (about 0.8 inches). There’s a diagram below showing the bones and what they represent: 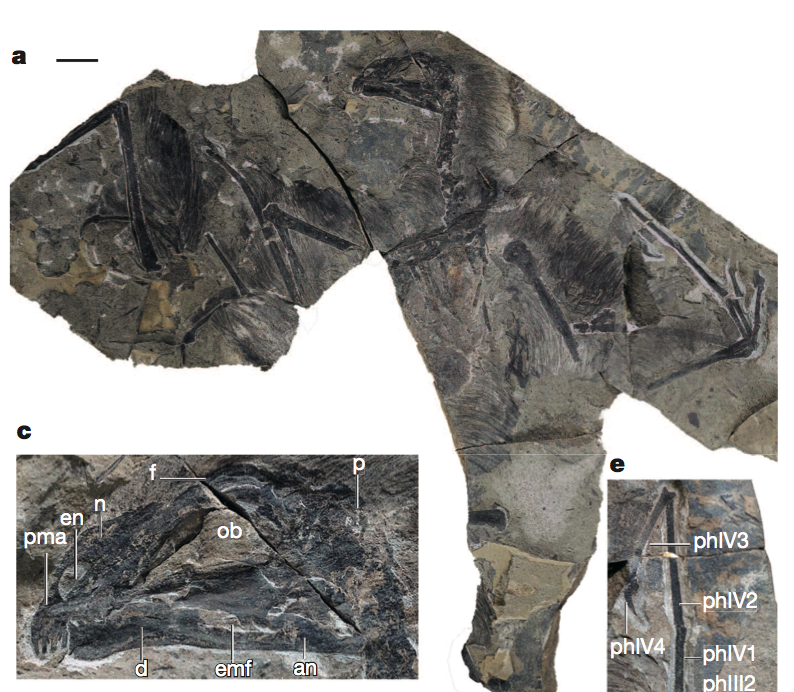 You can see the feather impressions above, and they’re outlined in light gray in the diagram below. There are filamentous feathers all over the body, though not on the membrane. 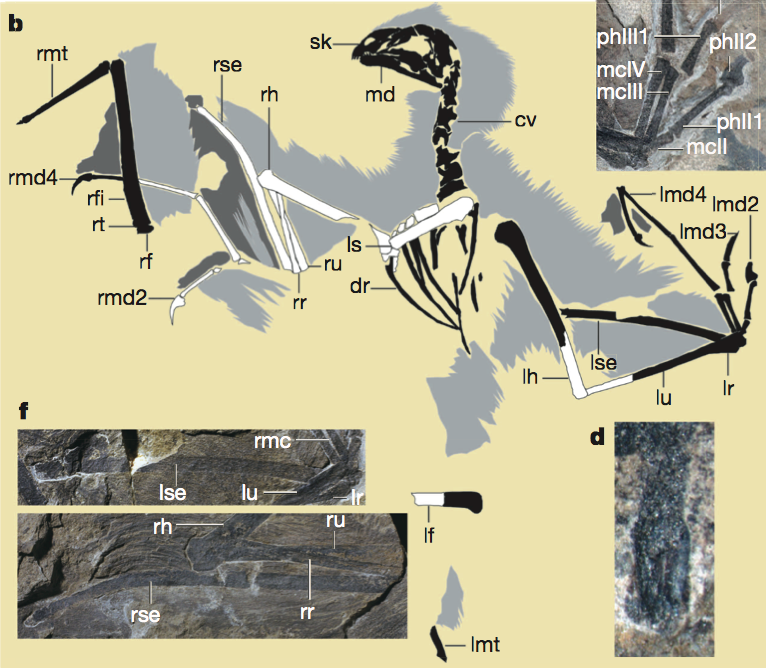 In the picture below the right styliform element is singled out (“ru” and “rr” are the ulna and radius respectively, the lower arm bones that we also have. The best way to see that these bones are extensions from the wrist is in the yellow diagram above, where the left styliform element (“lse”) extends out to to the left from the wrist, where the fingers (lmd [left manual digits] 2, 3, and 4 originate. 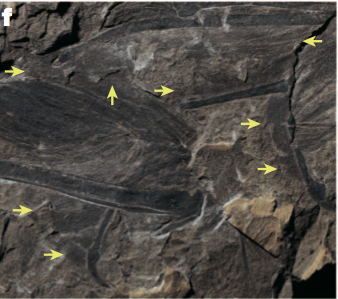 Finally, here’s a closeup showing both feathers and membrane; as the authors say, “comparison of sheet-like soft tissue (above digit II) and individual feathers (below digit II).” You can see this bit labeled as “rmd2” in the big photo and diagram above. The distinction is clear between filaments and membrane!: 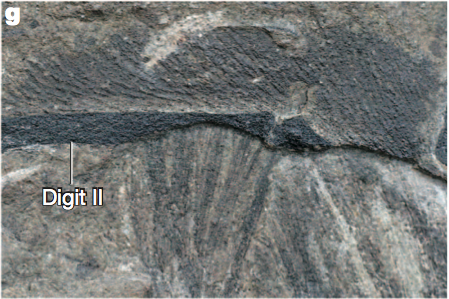 Here’s the authors’ reconstruction of the skeleton, which closely resembles that of other theropods with wings, and you can see the long wrist-extension bone going from upper left to lower right. The main “regular” finger supporting the wing is digit #4, which is the big one with the claw almost touching the ground: 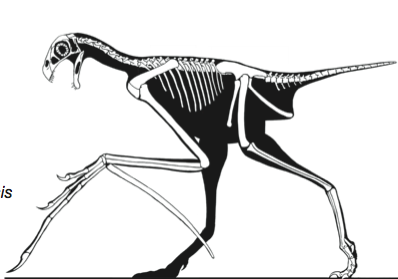 There’s an analysis of the phylogeny of this specimen, but that needn’t detain us here; suffice it to say that it nests within the other theropod dinosaurs, and so is not at all a pterosaur.

Here’s an imaginative reconstruction of Yi qi from ScienceNews (the tail and rear bits are imaginary, as we don’t have them!):

For comparison, here’s a pterosaur, also showing the wrist extension (the small “swordlike” bone coming off pointing at the shoulders), and the enormously enlarged single digit that supported the wing membrane. That was also digit #4, so there’s a case of convergent evolution here with the specimen above.  You can also see that the rest of the fingers simply stuck out from the wing. 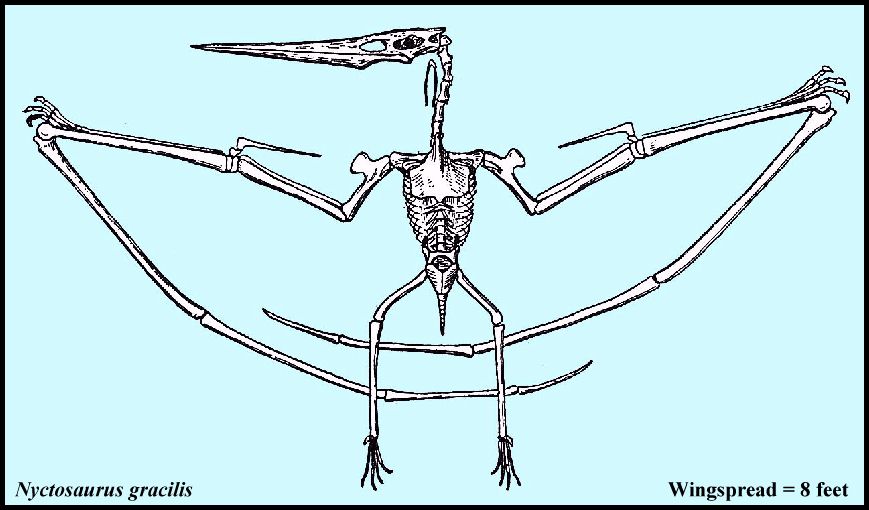 And here’s a pterosaur reconstruction from dinosaurjungle.com. The eentsy “fingers” sticking out from the wing may have helped it clamber about. In trees or on cliffs: 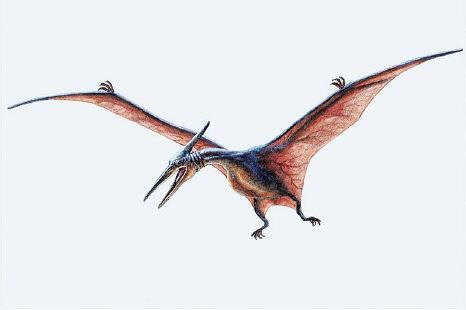 In contrast, bats differ in two ways. Four of their major digits—instead of one—support the wing (a single finger sticks out), and in this case there’s no wrist extension bone, though there appears to be one in the rear leg “wrist”: 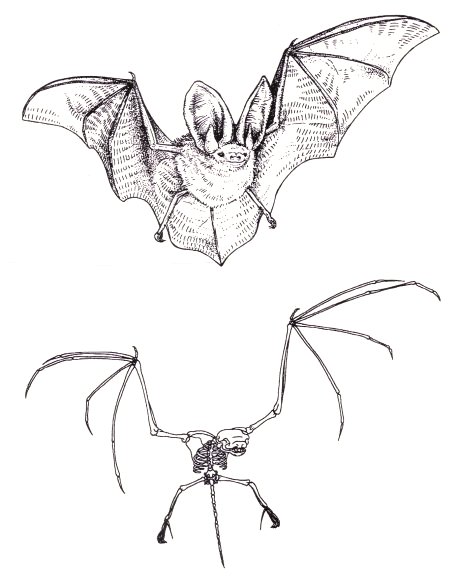 So, what we have is one of evolution’s luxuriances: a cool lineage that may well have included fliers or gliders, but didn’t form an ancestor of modern birds—though it may have been close to that ancestor.  It doesn’t tell us much about how modern birds evolved, but does affirm that the lineage we have today, as with many other groups like horses, involved many related branches that died out without leaving descendants.  Modern birds are the lucky ones (especially the ones that eat my seeds!).

108 thoughts on “Dino-bat: a new flying dinosaur with membranous wings”