After the Shameful Six boycotted PEN International‘s Gala for giving its “Freedom of Expression Courage Award” to Charlie Hebdo, a passel of other writers and activists have implicitly or explicitly criticized their literary confrères for bad judgment, and praised PEN‘s letter explaining the award:

Here are four of the nine people who took their stand on PEN’s “Courage in Continuing” site:

“Disgusting buts” is dead on, though one could add another “t” to the second word.

Meanwhile, Doonesbury creator Garry Trudeau, while walking the cat back a bit on Charlie Hebdo (Trudeau “mourns the group deeply”), still stood his ground in a two-minute Meet the Press segment. He again implies the magazine, through its satire on religion, brought the murders on itself. Click the screenshot to go to his remarks on the magazine; a partial transcript is below.

Note that Trudeau compares Charlie Hebdo’s criticism of religion to racism, a form of “punching down” at the “disempowered and disenfranchised” community of French Muslims. And he makes the bizarre claim that it’s “not really us for to decide. . . . what is sacred and holy for someone else.” Well, he could have said more or less the same thing about Republicans, whom he excoriated mercilessly! Trudeau needs to realize that, to a satirist, nothing is “sacred and holy”. And if something taken to be sacred and holy has detrimental effects on society, like institutionalized Islam, it deserves satire and mockery.

Trudeau, it seems, is very selective in his targets, avoiding the ones who could shoot back at him! 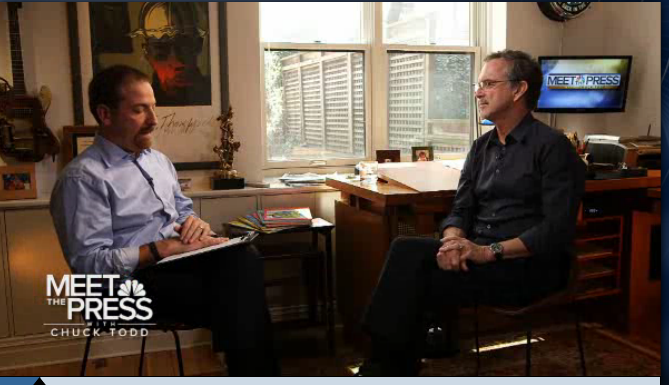 I was as outraged as the rest of the word at the time. I mourn them deeply. We’re a very small fraternity of political cartoonists around the globe… What I didn’t do is necessarily agree with the decisions they made that brought a world of pain to France.

I think that in France the wider Muslim community feels disempowered and disenfranchised in way that I’m sure is also true in this country. And that while I would imagine only a tiny fraction were sympathetic to the acts that were carried out and the killings, I think probably the vast majority shared in the outraged. Certainly that seems to be what people are hearing in the schoolyards in France now, is that they’re finding common cause at least with the issue, if not with the action.

I think that’s bad for France, it’s unfortunate, it’s a tragedy that could have been avoided. But every body has to decide where the red lines are for themselves.