Here’s a “ribbet-ing discovery”, a pun that comes from the Daily Mail. And, this time I did check the date on the research, and it is indeed new. The bad news is that I can’t access the journal Zootaxa (you can find three pages of the larger paper here, two of which are references), so I’m going on second-hand reports, which report the discovery of a new glass frog in the genus Hyalinobatrachium: H. dianae, which already has its own Wikipedia page.  Here’s a screenshot of part of the first page, which gives the reference:

The frog is getting attention because it supposedly looks like Kermit.  You be the judge; I refer you to that eminent repository of biological research, The Daily Mail:

Glass frogs are of course named after their renowned transparency, which this one shares:

The Mail reports (hey, I’m happy that they give this much biological information in a tabloid!):

Scientists were surprised to stumble across the frog, given that a through survey of the region was conducted late last century, and reported their find in the journal Zootaxa.

The frog was named by Brian Kubicki who discovered it, after his mother Janet Diana Kubicki to thank her for supporting his interest in science, Costa Rica’s Tico Times reported.

. . . Lead author of the study, Dr Kubicki said: Its advertisement call is quite unique…It’s different than any other species that has been discovered.’

The study says the frog’s ‘advertisement call’ consists of ‘a single tonal long metallic whistle-like note with a duration of 0.40–0.55 s… and a dominant frequency of 3.35–3.44 kHz’.

It’s likely the frog uses it to find a mate in the mountain forests.

Dr Kubicki said that the amphibian sounds more like an insect than a frog, which may explain how experts missed it during their extensive survey.

The frog also measures just one inch (2.5cm) long, making it relatively difficult to spot among the foliage in the west forests and rainforests of the Caribbean foothills of Costa Rica where it was discovered at elevations of between 1,312 ft to 2,624 ft (400–800 m).

And USA Today adds this:

Brian Kubicki said the small, semi-translucent specimen is delicate and “is a good indicator of the general health of the eco-system.” Kubicki named the frog “Hyalinobatrachium dianae” in honor of the senior author’s mom Janet Diane Kubicki, the Costa Rican Amphibian Research Center says.

Other authors include Stanley Salazar and Robert Puschendorf, according to the Center.

According to C|Net, the species has been given the adorable common name of “Diane’s Bare-hearted glassfrog,”

NBC News has a report with a video and this introduction:

A new species of frog found in the Central American country of Costa Rica is being compared to Jim Henson’s most famous Muppet and apparently the two look most alike in the eyes.

I love the note “the Central American country of Costa Rica,” as if most people don’t know where it is. But by “most people” I mean “most people in the world,” for Americans are notoriously ignorant about geography.

And here’s the video; click on the screenshot below to see it: 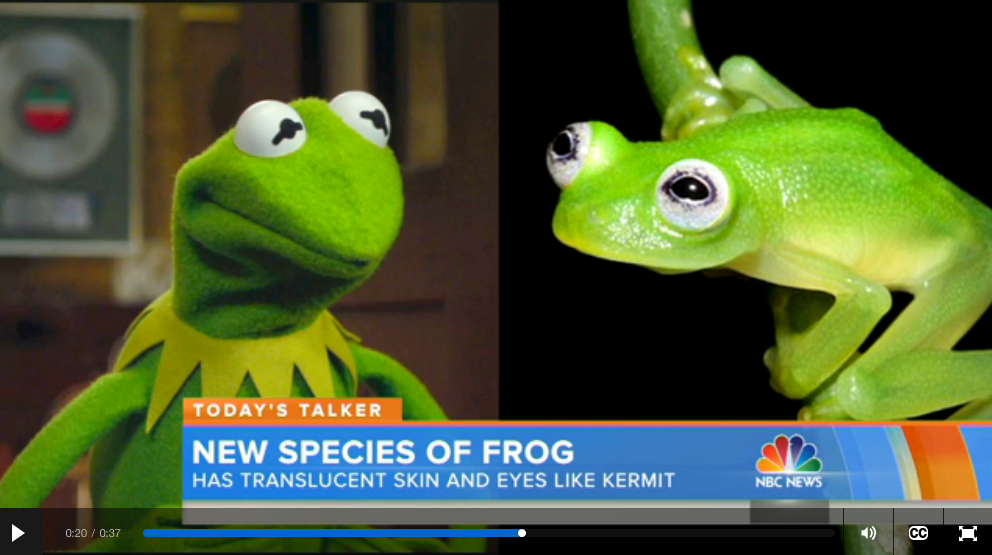