The Big Think’s “Errors we live by” site has a post called “Reason is larger than science,” which makes a number of statements intending to do down science. Some of them are fine, and others are wonky, but the ones that are fine are bloody obvious.  The piece is illustrated, though, with this figure, so you can see where it’s going: 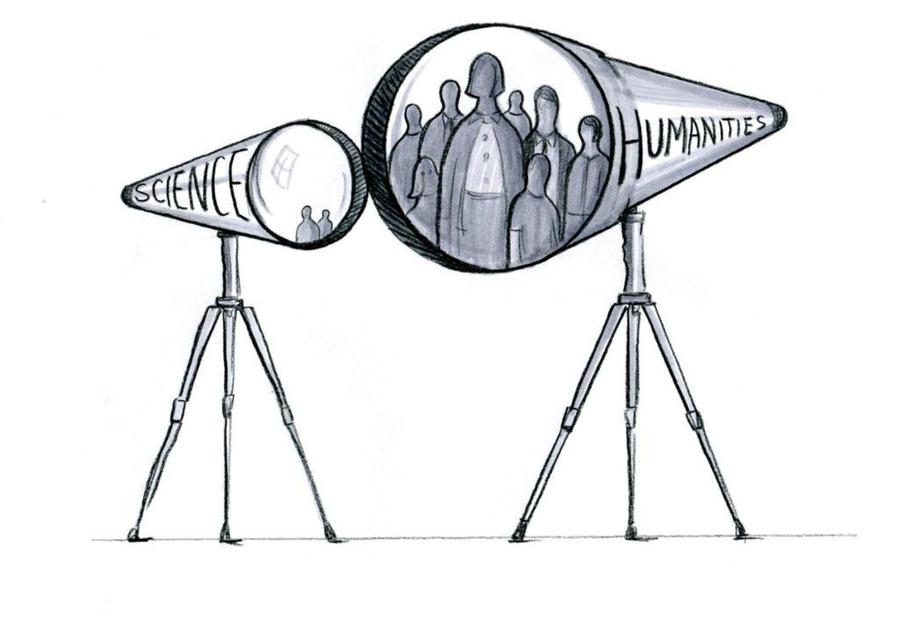 It contains 9 claims, some not obviously connected with its thesis. Here are just four examples of a superbly stupid article that makes no clear point at all:

1. The closer we get to human patterns, the more useful the logic and lexicon of the humanities is. If well practiced, science reduces biases and errors, but it grants no immunity to nonsense.

Who said that science never was nonsensical, for, after all, some scientists are weird and crank out crazy stuff, like cold fusion. But science itself as a set of tools will drive out nonsense. The humanities won’t do that, as clearly demonstrated by the persistence of postmodernism. As for “the logic and lexicon of the humanities” being better for understanding “human patterns,” I’d like to see an example that’s not based on empirical observation and testing, i.e., science broadly conceived.

2. Scientists often seek a mathematical “totalizing” theory, however such “monotheorism” risks “theory-induced blindness.” And mathematics is a subset of logic. Plus its tools aren’t always useful.

Yeah, and some of us don’t seek a mathematic totalizing theory, which isn’t useful in biology (there’s not a single equation in Darwin’s On the Origin of Species). And even if mathematics isn’t science per se, it is useful to find out what’s real, which is in the ambit of science. And really, mathematics isn’t always useful? That’s true, but doesn’t leave a mark on science because not every bit of science rests on mathematics, much less “mathematical totalizing.”  Yes, math wasn’t useful for Darwin, but how does that show us that his theory is fallacious, or that something’s wrong with science?

8. Not all non-science is nonsense. Far from it, much of non-science is logical; its reasoning is locally reliable. Many reliable skills and arts are unscienced (deploying qualitative facts without underlying unified theory). And all that’s subjective remains unscience-able.

Another straw man. Logic may not be science, but it still is a useful tool in helping us weed out nonsense. I wouldn’t say that the Pythagorean theorem is a piece of science, because it is absolutely true in all the right reference frames, and, unlike claims of science, can be “proven”. No sane scientist, though, would deny that the theorem is extremely useful. So is Plato’s Euthyphro argument, which I consider one of the most useful bits of philosophy around, for it proves logically that morality cannot come from God.

And of course neither music nor art as practiced are “scientific,” but who would dismiss them as “nonsense”?  They’re palliatives, consciousness-expanders, and emotional stimulants.

Nevertheless, science is the only game in town if you want to ascertain what’s real in our universe. It is the only reliable “way of knowing”, if by that we mean “finding out stuff that everybody agrees is true.”

9. Many tend now to defer to “the science” mindset. It would be wiser to use diverse thinking tools, to reason humbly, and artfully fit the tool to the task. Much is logically true without “the numbers.”

Logical truths or mathematical truths are not “scientific” truths, which depend on empirical observation. But logic and mathematics are part of the scientific toolkit that helps us find out what is true in our universe. They are not separate from “the science mindset”, but part of them.

I’m not sure who Jag Bhalla is, but if he was paid more than one cent to crank this stuff out, he was overpaid. If you want, try your hand at the other five propositions.

77 thoughts on “Is reason “larger than science”? A lame attempt to diss science”