We interrupt today’s episode of “Readers’ Wildlife Photos” for a special comedy interlude. Our regular program will return tomorrow.

This will probably interest only those readers who are either enamored of Philomena Cunk (Diane Morgan) or those who follow UK politics, but because the show features the Official Website Sweetheart™, I’ll put it up anyway. It’s last night’s version of “Have I got News For Uou,” a BBC comedy show hosted on this occasion by Daniel Radcliffe.

Philomena, as usual on these multiple-comedian shows, remains rather quiet; I think she’s shy or reticent. As Matthew (who saw the show) commented, “She (and Armando Ianucci, who was the other guest) were pretty quiet to be honest. But she had some good gags and also knew some of the answers to the topical questions.” I have to say that I don’t understand nearly 95% of the humor, as it’s based on UK events, and I’m a parochial Yank.

Matthew Cobb sent me a sample of the encomiums on Morgan’s twi**er feed. Best post: when someone asks her if she’s on as herself or Philomena Cunk, and Morgan replies, “Myself. But there’s hardly much difference.”

What’s not to like? She had me at “mohn-keh,” and she can drink four Sambucas and seven gin and tonics. 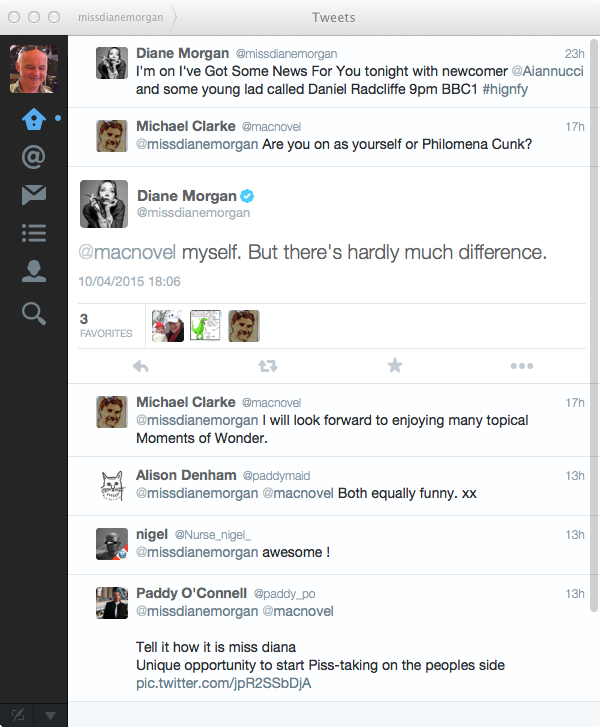