Today we have more identity politics, with the emphasis on “identity” rather than “politics.” This involves another college campus, the prestigious University of Michigan, which cancelled a showing of “American Sniper” after Muslim students—and probably many non-Muslim students—complained that the movie made them feel unsafe, was “triggering”, and perpetuated anti-Muslim stereotypes. As The College Fix reports (and it’s been substantiated by several other sources):

A scheduled movie screening of “American Sniper” at the University of Michigan was abruptly cancelled Tuesday after nearly 300 students and others complained the film perpetuates “negative and misleading stereotypes” against Muslims.

“The movie American Sniper not only tolerates but promotes anti-Muslim … rhetoric and sympathizes with a mass killer,” according to an online letter circulated among the campus community via Google Docs that garnered the signatures.

The signers were mostly students, but also some staff, as well as the Muslim Students’ Association and the president of Students Allied for Freedom and Equality, a Palestinian solidarity group at UMich.

The online memo, titled a “collective letter from Middle Eastern and North African (MENA) and Muslim students on campus,” accused the public university of “tolerating dangerous anti-Muslim and anti-MENA propaganda” by showing the movie, the highest grossing film of 2014.

Here’s the collective letter, which you can see at the first link (I wasn’t able to access the “online memo” link): 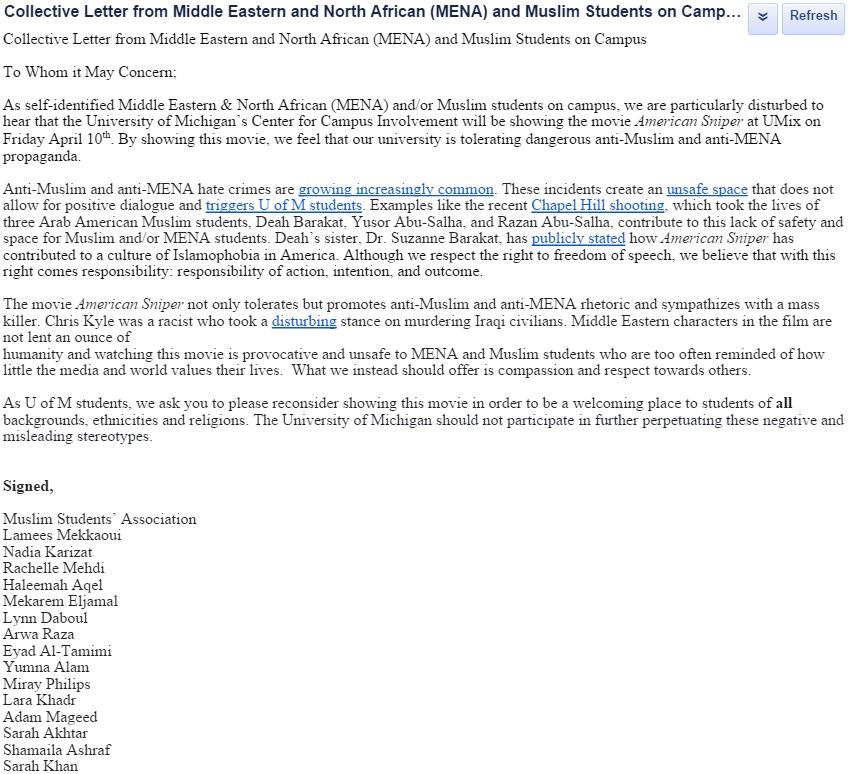 “While our intent was to show a film, the impact of the content was harmful, and made students feel unsafe and unwelcomed at our program,” stated The Center for Campus Involvement, which oversees student activities and is run by university employees, as it announced its decision Tuesday on its various social media accounts, including Twitter and Facebook.

“We deeply regret causing harm to members of our community, and appreciate the thoughtful feedback provided to us by students and staff alike.”

University spokesman Rick Fitzgerald confirmed to The College Fix on Tuesday the movie was cancelled.

. . . “We in the Center for Campus Involvement and the UMix Late Night program did not intend to exclude any students or communities on campus through showing this film,” the center’s announcement stated.

“… UMix should always be a safe space for students to engage, unwind, and create community with others, and we commit to listening to and learning from our community in the interest of fostering that environment. … We will take time to deeper understand and screen for content that can negatively stereotype a group.”

The Center for Campus Involvement’s Facebook page indicated that the film would be replaced by, appropriately, “Paddington Bear“: the equivalent of showing triggered students videos of puppies and kittens.

The sad thing is that the students who objected didn’t have to go to the movie. In fact, everyone can find out what American Sniper is about from simply Googling. What they objected to was not seeing the movie, but having the movie actually shown on campus.  And they succeeded, thanks to a compliant group of administrators and students who don’t give a damn about free speech, for if anyone says that speech is “offensive”, we must by all means ban it.

American Sniper is a true story, and, though I haven’t seen it, I know it sparked a lively conversation about whether or not Kyle was admirable, about the ethics of his actions, and so on. That conversation will not take place at The University of Michigan. Should we also ban “Schindler’s List” or “Band of Brothers” because they show Germans engaged in mass killings, which could trigger both Germans and Jews? Should we ban “Triumph of the Will” by Leni Riefenstahl because it glorifies the Nazis, which it does in a very clear way?

There are in fact many movies showing bad people doing bad things. That’s what happens in this world. Regardless of what you think about Chris Kyle, students should have the opportunity to see the movie for themselves. If they think it will grossly offend or “trigger” them, then they shouldn’t go. But they have no right to control what other students will see.  I, for one, would welcome seeing Nazi propaganda movies, including those that demonize Jews, (in fact I’ve seen many of those movies) as a way of creating a conversation and learning about history.

These students should grow up; they have no right to not be offended. And the University of Michigan and those who cancelled the movie should be ashamed of themselves. They have abrogated the very mission of a good university: to challenge students’ views and make them think.

I look forward to the universities of 2040, in which all movies shown will be about bears, penguins, and puppies, and everyone always feels “safe.”

193 thoughts on “University of Michigan cancels showing of “American Sniper” after accusations of Islamophobia and triggering, substitutes showing of “Paddington Bear””