In August of 2014, Andrew Pessin, a professor of philosophy at Connecticut College, posted the following pro-Israel and anti-Hamas message on his Facebook page: 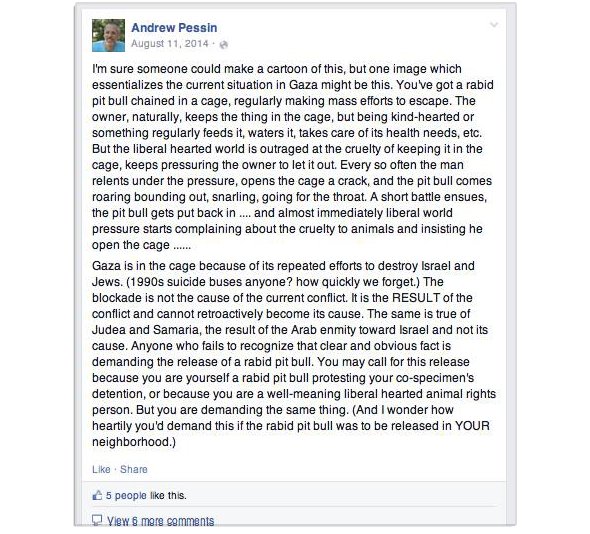 To me, this post reads more or less like a passionate editorial in a newspaper: a political statement rather than an episode of bigotry or hate speech. Unless, that is, Pessin was characterizing Palestinians themselves as dogs.

But that seems unlikely. Who, exactly, was Pessin referring to with the term “pit bull”? According to Slate, which reported on this episode and its sad aftermath, Pessin had been talking about Hamas (the Slate piece was reprinted from Inside Higher Ed):

Nowhere in the post does Pessin say “Palestinians,” but he also doesn’t say “Hamas.” In an interview with Inside Higher Ed, Pessin said he acknowledges that the post was ambiguous. He posted it after a series of 10 other comments written between July 23 and Aug. 11 about Hamas and the group’s tactics and goals.

Reading those preceding posts would have made it clearer that he was using the metaphor of a pit bull to describe Hamas, he said. “Let me say unequivocally: I am not a racist,” he said. “I am a passionate promoter of equal rights for all peoples. I’m a supporter of a two-state solution.”

But the damage was done, for students found the 7-month-old post and deemed it racist “hate speech.” One student emailed Pessin and said she considered his statement racist and bigoted. He apologized and deleted the post.

That wasn’t enough. The student, Lamiya Khandakar, then wrote a letter to the college newspaper, “Why hate speech is not free speech in an ‘inclusive excellence’ community.” Other letters followed, and Pessin became a symbol of “racism”. He apologized again:

He wrote a brief letter to the editor in which—based on advice from the administration—he apologized for any hurt he caused. He wanted to defend himself, but he recognized that could put the blame on students who misinterpreted his words, he said.

But it was far too late: letters and petitions circulated asking the administration to condemn Pessin’s actions, even though they were on his Facebook page and were an exercise in free speech. Even Kandaker said that her personal interactions with Pessin, with he a Jew and she a Muslim, were not uncomfortable:

In her letter, Khandaker says that she took a class with Pessin and, as a Muslim, she never felt uncomfortable in class. But just because Pessin’s views don’t interfere in his teaching doesn’t mean they’re not a problem, she argues. In fact, because he is smart, influential, and well-liked in classes, students are more likely to listen to his posts on socio-political issues, she wrote. Khandaker is chair of diversity and equity for the student government, in which she’s responsible for bringing the concerns of underrepresented students to the administration.

Nevertheless, the vitriol, hatred, and accusations of racism mounted until Pessin was forced to cave in, and left the campus (presumably temporarily):

There also were several anti-Semitic comments made on campus and via Yik Yak after the letters were first published, Pessin said. He decided this week to take a medical leave of absence for the remainder of the semester, partially due to the stress the accusations against him have caused.

He’s toast now, and it’s not clear whether his “medical leave of absence” was suggested by the university. Now, because his Facebook post injured the feelings of some students, his life on campus will never be the same. And the university, to soothe the feelings of the students offended by equating Hamas with a semi-caged pit bull, has mounted the obligatory forum on diversity and inclusion. (They also mention “free speech”, but you can bet your tuchus that the emphasis will be on avoiding hurting other people’s feelings):

Later today, students, faculty, and staff will gather for a forum hosted by the administration on free speech, equity, and inclusion. In two campus emails announcing the forum, President Katherine Bergeron said the comments stemming from Pessin’s Facebook post have posed larger questions about the nature of free speech and the values of a diverse community. Connecticut College is a community that is aiming for “inclusive excellence,” she said.

“The conversations of the past few days—including some anonymous comments on Yik Yak—are evidence of how much work we have to do to reach our aspirations,” she said.

“By now, there have been many opinions expressed about the original Facebook post, as well as about subsequent comments on Yik Yak and elsewhere,” Bergeron wrote in as open letter to the student body. “But one thing has become extremely clear: the level of harm that incendiary language can have on a community. The post caused an outpouring of anger and pain among many different groups of students, faculty, and staff.”

Pain? Incendiary language? Anger? What have we come to when a post like the one above can cause students not to counter with a critique of the politics, but with wails and cries about their hurt feelings? This is identity politics, with the emphasis on “identity” rather than “politics”. If one disagrees with Pesson’s analysis, then write about how his take on Hamas and Palestine is wrong, not that he shouldn’t say those things because they hurt other people’s feelings.

It can’t be said too often: nobody has the right not to be offended. Rather than giving the equivalent of blankets and puppy videos to its wounded students, Connecticut College should be emphasizing the importance of free speech and lessons about what one can do if one doesn’t like what is said.

And I wonder whether, if a professor had attacked the Israeli Defense Forces on Facebook with the same force as Pessin did when going after Hamas, this whole conflagration would have occurred. I doubt it, for on campus these days it’s pretty much acceptable to demonize Israel—but not Palestine or Hamas.

But regardless of who’s in the ascendancy, this whole affair stinks, for we’re seeing yet another example of free speech being characterized as “hate speech”—this time to the extent that a professor was forced to take a leave rather than face the rancor of hypersensitive students. It’s time for students to grow up. The Connecticut College administration is in fact infantilizing them instead of promoting their adulthood, for it’s teaching them that by playing the “hurt card,” you can silence your enemies.