I believe I said that I would never again write about the execrable atheist-bashing atheist C. J. Werleman, whose credibility went in the dumper when he was found to be a serial plagiarizer. His contrition was obviously not genuine, for he’s now attacking New Atheists in the most vicious way possible. It’s almost as if, blaming them for his downfall, he’s trying to destroy them with the most ludicrous accusations possible.

I decided to break my pledge (sorry!) because Dan Arel convinced me that the man is dishonestly demonizing New Atheists and, in Dan’s words, “has become the very person he says he is speaking out against.”

I’ll refer you to Joshua Kelly’s analysis over at Dan’s site at Patheos in a feeble attempt to not write too much about Werleman myself, but I will show a couple of his recent sentiments as expressed on Twi**er. He’s referring here to. . . well, us: 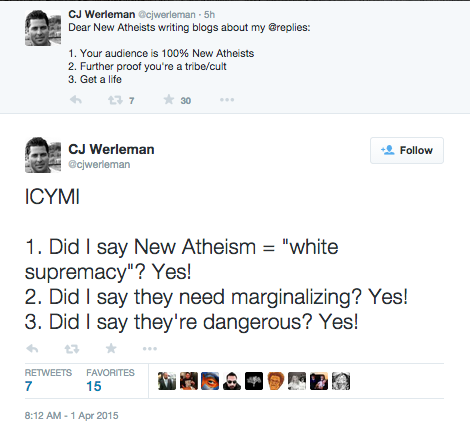 It seems to me that some of the most vociferous bashers of New Atheists are atheists themselves, and have far more in common (at least philosophically) with people like Sam Harris, Dan Dennett, and Richard Dawkins than they do with some of the more dangerous believers, like jihadist Muslims or fundamentalist Christians. Why on earth, then, does Werleman (and he’s not the only one) act like this? Is it jealousy? Is he acting out after his loss of reputation?

After all, there’s no evidence I can see that New Atheists are either white supremacists, “dangerous fundamentalists” (whom do they endanger?) or “need marginalizing”. Which atheists don’t need marginalizing, given that all nonbelievers willing to admit it are already marginalized—at least in the U.S.?

Now if I ever mention Werleman again on this site, the first person to point it out will get an autographed and felid-illuminated (by me) copy of WEIT.  It is finished.