The proliferation of identity politics and the demonization of free speech continues apace on America’s campuses. Speakers with unpopular opinions have their speaking invitations rescinded or are demonized by students whose tender ears can’t bear to hear something challenging, and students continually press for rules against “hate speech,” often construed as “speech that makes me uncomfortable.” For a fuller account of the bizarre extremes of this brand of campus fascism, see Wendy Kaminer’s piece in Friday’s Washington Post, “The progressive ideas behind the lack of free speech on campus.”

I don’t know why the mantra “all politics is personal” is permeating our campus, but I have my theories. I won’t inflict those on you now; I merely want to report another example of campus excess, a flyer distributed by Columbia University’s group Everyone Allied Against Homophobia (EEAH). EEAH asked every Columbia student to put this on their window, declaring their room to be a “safer space,” and many did: 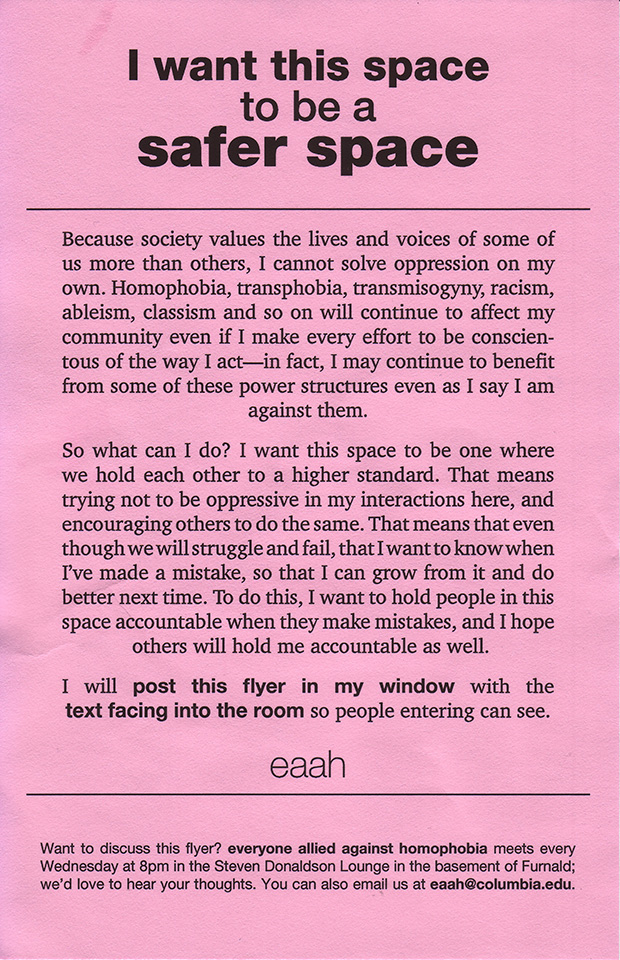 I hardly need to point out that I, too, am against homophobia, have taken a consistent position in favor of gay rights over the last few decades, and written about it frequently here. And of course I abhor discrimination against trans people, disabled people, poor people, or members of other ethnic groups.

But what this sign is about is censorship: certain ideas will not be discussed, certain issues will not be entertained, all feelings will be coddled and nobody will be offended. Colleges are supposed to be “unsafe spaces”—unsafe in the sense that you can expect your ideas to be challenged, your feelings to sometimes be bruised, and, rather than having your ideas, opinions, and feelings coddled, you’ll be expected to defend them. I feel revulsion at the idea of a “safe space”, for it’s the antithesis of academic freedom, and a discussion stopper.

Let me put it this way: everyone here knows that while I think Israel has done some bad stuff in the Middle East, I also think they’ve been given an excessively bad rap by the world, and the Palestinians given excessive deference. But would I want to stop discussion of this topic on campus, or prevent someone from bringing it up in my presence or even from making anti-semitic remarks? No. Would I want my university to prosecute someone who called me a “racist” for generally being on Israel’s side in the fracas (and those slurs have been made)? No. I would argue back as far as I was able, and perhaps I’d learn something, as I often have in these discussions. If my room were a “safe space” in which nobody could bring up potentially upsetting matters, I would never even have the opportunity to change my mind or even examine my views.

At any rate, a Columbia student named Adam Shapiro, a history major, wrote a letter in the Columbia student newspaper decrying this proliferation of “safe-space” ideology, and also said this in an interview for Spiked:

‘People call them safe-space zones, but actually they’re censorship zones, that’s exactly what they are’, Shapiro tells me. ‘Students need to fight back and have dangerous spaces.’ Towards the end of last year, Columbia — home to some of the most PC, word-watching students in the modern West — had at least one ‘dangerous space’: Shapiro’s room. Instead of hanging up the sad ‘safe space’ sign shoved under his and every other students’ dorm door, Shapiro wrote and displayed a sign headlined ‘I do not want this to be a safe space’. His room, the sign said, is a place where all who enter will be expected ‘not to allow identity to trump ideas [or] emotion to trump critical thinking’. ‘Whether you’re black, white, Latino, Asian, Native American, gay, straight, bi, transgender, fully abled, disabled, religious, secular, rich, middle class or poor, I will judge your ideas based on their soundness and coherence, not based on who you are’, his sign declared. Then there was the sign-off, in bold, a warning to anyone who thought they could pop into this student’s room and arrogantly expect that certain things would not be thought, said, or argued out: ‘This is a dangerous space.’