The Saturniidae is a large family of moths (ca. 2300 species), and is also a family of large moths, including some of the world’s biggest and most beautiful.

Here’s one of them: the luna moth (Actias luna); this one’s a female. Notice two features of this insect: the long “tails” on the rear wing, and the eyespots on the same wings. There’s also one feature you can’t see: like mayflies, the adults hatch without mouths, so they can’t eat. They live only to mate and produce the next generation, and they die within a week after breaking out of the cocoon. 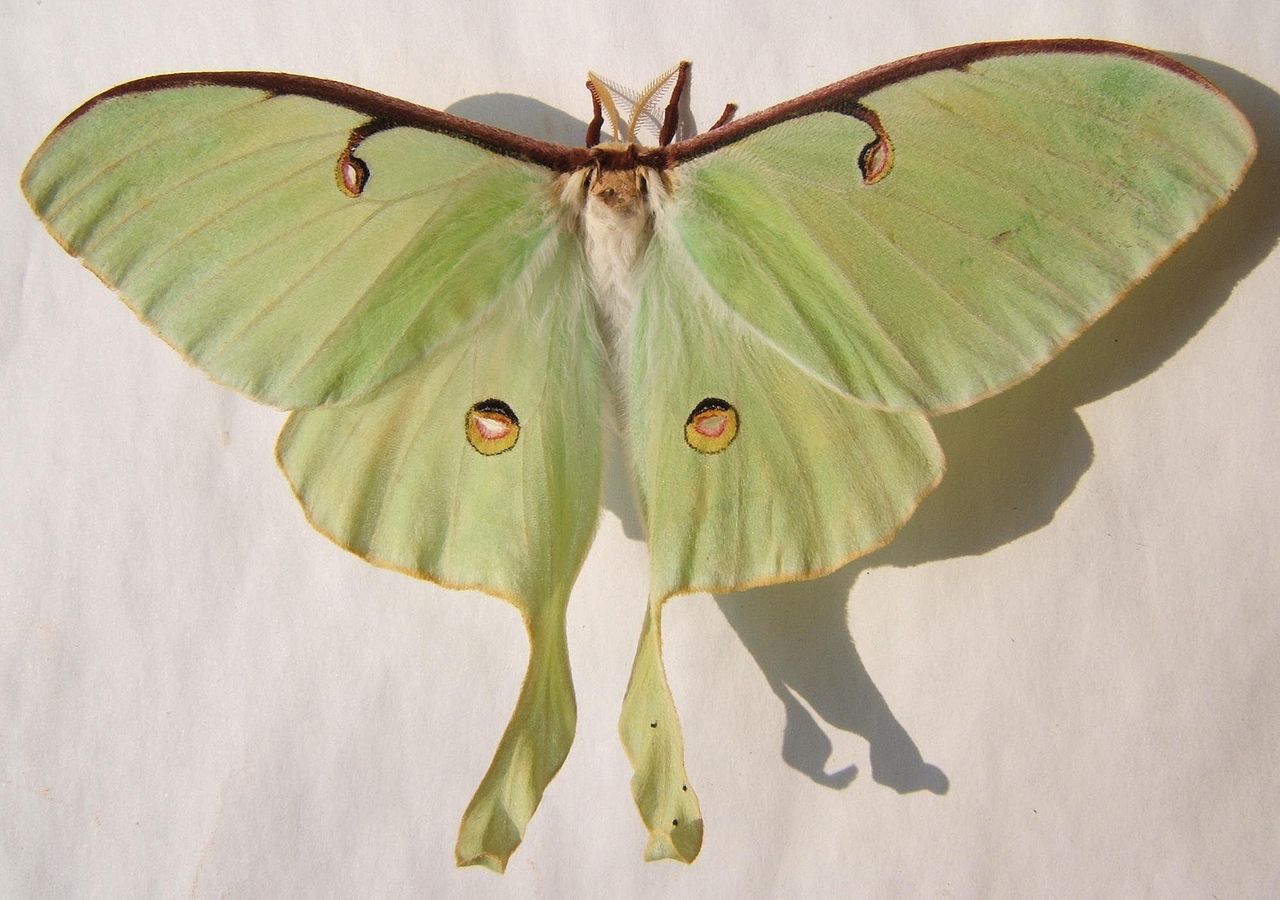 It’s been known for a while (from experiments) that these eyespots serve to distract predators, mostly birds who peck at them and, while possibly inflicting damage on the wing, also avoid pecking at the vital head and thorax, giving the pecked moth a chance to escape. There’s an obvious selective advantage in that. (In some lepidopterans the eyespots may also frighten away predators by resembling the eyes of scary birds like owls.)

But what about those long tails? A new paper in Proceedings of the National Academy of Sciences (US) by Jesse Barber and colleagues (reference below; free abstract and pdf) suggests that they help distract predatory bats.  Like most moths, saturniids are largely nocturnal, and so they’re subject to predation by animals that can’t see very well: bats! Bats hunt by sonar, and the authors tested the hypothesis that the moths’ “tails”, which spin and wiggle as they fly, are attractive to bats, who attack them and leave the vital body alone. They suspected that the tails had evolved to help the moths escape predation.

In short, the authors put luna moths together with big brown bats (Eptesicus fuscus) in a darkened and soundproofed room, and filmed what happened with infrared cameras (and listened with ultrasensitive microphones). They used eight bats and 162 luna moths, as well as “control” moths. In each trial, a bat was put in the room with one intact luna moth, one luna moth with its tail “ablated” (science jargon for “cut off”), as well as a control pyralid moth.  For convience in filming, moths were tethered to the ceiling with a length of monofilament line. Luna moths and big brown bats don’t live in the same place in nature, so the bats were hunting moths that they’d never before “seen.”

Here are the results from the paper, showing that the tails made a very big difference in the probability of being captured (you can also see five movies on the site showing the bats’ hunting behavior). My emphasis in the following:

Bats captured 34.5% (number of moths presented; n = 87) of tailed luna moths, and 81.3% (n = 75) of moths without tails were caught—a 46.8% survival advantage for hindwing tails (Fig. 1). Mixed-effects logistic regression revealed a moth without tails is 8.7 times [confidence interval (CI) = 2.1–35.3] more likely to be captured than a moth with tails. During each foraging session, we presented a bat with one intact luna moth, one luna moth with its tails ablated, and 1–2 pyralid moths as controls. Control moths were captured 97.5% (n = 136) of the time.

While these results are strongly suggestive that the tails might have evolved to help elude bats, there are some caveats.

1. Maybe the tailed moths were harder to catch simply because they were bigger than the snipped moths. Big brown bats catch moths by enfolding them in a wing, and then bringing the tail up to scoop the moth into the mouth. Maybe the tailed moths are simply harder to catch that way, and so the tails evolved not to distract bats, but to make the moths harder to scoop up. To test that, the authors also presented the bats with saturniid moths that don’t have tails (Antheraea polyphemus), but are even bigger in body+ wing area than are luna moths. These controls were indeed caught less often than snipped luna moths, suggesting that bigger surface area does matter, but the effect wasn’t big enough to explain the difference between snipped and intact moths. However, the probability that the tails had an effect beyond just increasing size wasn’t impressive: the p value (probability that tails didn’t have an real effect but one that appeared by chance) was marginally significant—less than 5%. That’s significant statistically, but not terribly impressive.

2. Maybe there are other selective pressures that explain tails in moths. One suggestion is that they help the moths fly better. The authors analyzed flight behavior in snipped versus unsnipped moths and found that only the frequency of wingbeat changed—from 10 to 11 Hz (whatever that is)—but they claim that no feature of flight changed that could help the moth evade predators,

Well, okay, that’s something. What about sexual selection, though? Could the long tails be attractive to females, males, or both? The authors consider this unlikely because males and females have similar sized tails (sexually selected traits often differ in size or elaboration between the sexes, with males usually showing the larger or more elaborate trait). Further, the moths apparently mate at night, and don’t use visual cues for mating. In some species of moths, though, males do have longer tails than females, but the authors say that this might be due not to sexual selection but predation: males spend more time flying than do females, for they’re looking for the females, and thus are under more selection to avoid predation. That sounds a bit like special pleading.

All in all, though, I think the authors have a reasonable case that the tails deter bat predation, though it would be nice to do the experiment with other species of tailed moths. Further, the low significance of the results, especially in tests of the body-size hypothesis, is a bit worrisome. Still, the results are better than simply looking at the moths and making up an adaptive story without testing it! This was, after all, a very hard experiment to do.

Finally, the authors wanted to know how many time long tails in moths have evolved independently. They made a phylogeny (family tree) of representatives from 7 moth families using five nuclear genes and one mitochondrial gene, and then superimposed on that the tail sizes of the moths. The phylogenetic tree + tail size diagram shown below clearly indicates that long tails evolved independently in this group at least four times (the gray shaded bits of the tree). I’ve put the original figure caption below so you can see what the colors mean:

The classic bromide of scientific conclusions holds here: “More work needs to be done.” Nevertheless, we know a bit more than we did before, and this result may lead others to look for additional and non-obvious antipredator strategies of lepidopterans. As we always say in the Darwin game: “Evolution is cleverer than you are.”

39 thoughts on “A tail of moths and bats: a novel anti-predator trait”