A climate-change skeptic got pwned. According to the PBL Netherlands Environmental Assessment Agency (my links):

Late 2009, in the run-up to the international climate conference in Copenhagen, PBL climate researcher Bart Strengers had an online discussion with climate sceptic Hans Labohm on the website of the Dutch news station NOS (in Dutch). This discussion, which was later also published as a PBL report, ended in a wager. Strengers wagered that the mean global temperature over the 2010–2014 period would be higher than the mean over 2000 to 2009. Hans Labohm believed there would be no warming and perhaps even a cooling; for example due to reduced solar activity.

The denialist even specified which data should be used: satellite data from the lower 5 km of the atmosphere, collected by the University of Alabama at Huntsville.

Labohm lost. Here are the data from the University of Alabama, with the horizontal gray line at 0.0 representing the mean since 1979, the means for each ten year-period up to 2009 represented by horizontal green lines, and the mean from 2010-2014 (the mean that, according to Labohm, was supposed to be either lower or unchanged. It isn’t. The difference is small—an increase of only 0.1°C—but the 35-year trend is pretty clear as well. 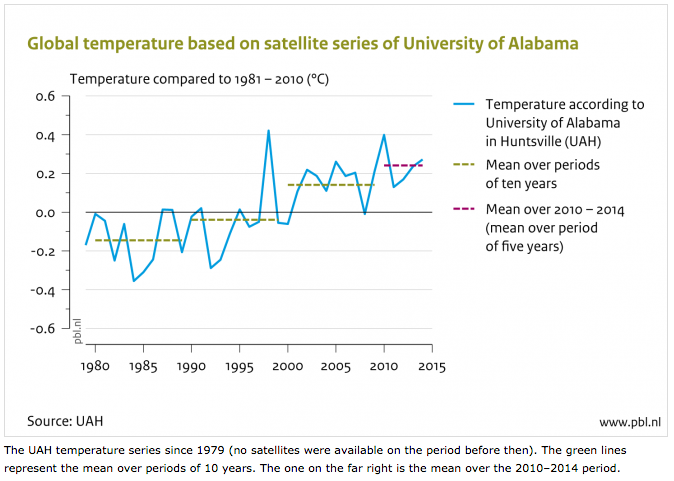 Sadly, the prize was just “a good bottle of wine.” Had it been my bet, I would have been more specific and asked for a bottle of 2005 Chateau Petrus. Never bet something like “a good bottle of wine” unless you know the person you’re betting with is an honest oenophile rather than a guzzler of Two-Buck Chuck.