The Canadian government has often treated its indigenous people horribly, including taking kids from their family and sticking them in special residential “Indian schools” where they were forbidden to use their language or learn about their culture, and where they were often horribly abused. I saw one of these schools, now closed, when I was in Kamloops last year for the Imagine No Religion conference. Hearing the story, I was horrified.

So, in an admirable effort to make up for past misdeeds, Canada has made a number of accommodations to the people of the “First Nations”, as they call them. But this time they’ve gone too far, and have failed to remove children from their homes when they should have. These children are ill with cancer, and the government endorses “traditional” methods of healing, which inevitably lead to death. The government’s failure to insist on modern medical treatment for First Nations children has caused the death of one girl, and will soon cause the death of another. As the title of this post indicates, I consider this equivalent to murder, or at least manslaughter, for these deaths are entirely predictable and in many cases were preventable.

If that sounds harsh, it’s because I’m hopping mad over this kind of stuff. Courts in the US and now Canada have for far too long respected parents’ (and brainwashed children’s) desire to reject Western medicine in favor of faith healing or “alternative” (i.e., useless) medicine. In nearly every state in the U.S., parents who refuse medical care for their children on religious grounds get serious legal breaks compared to parents who also reject that care but on non-religious grounds. It’s an unconscionable kowtowing to faith, something I’d expect in America but not in Canada, which has always seemed more sensible (and less religious) to me.

The child who was just killed by Canada was Makayla Sault, an 11-year-old member of the Mississauga tribe of the New Credit First Nation in Ontario. She was suffering from acute lymphoblastic leukemia, and died yesterday after the courts refused to intervene and continue her chemotherapy. Her parents took her to a quack institute in Florida for bogus treatment, and there she passed away. Here are the salient facts as reported by both the CBC News and The Globe and Mail.

But first, here’s Makayla while she was alive. Click on the screenshot below to go to the CBC article and a video report on her death: 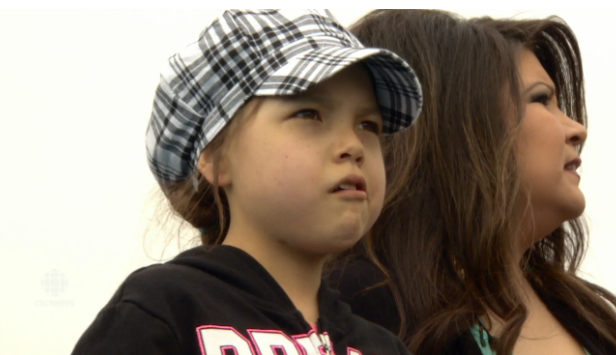 Makayla had a good chance of surviving had she continued treatment.  As the CBC notes:

Makayla was given a 75 per cent chance of survival when she was diagnosed with acute lymphoblastic leukemia (ALL) in March. She underwent 11 weeks of chemotherapy at McMaster Children’s Hospital in Hamilton.

Her parents were religious (both were pastors) and chose to discontinue treatment in favor of alternative treatments. They don’t regret their decision that lead to her death. Again from the CBC:

After Makayla said she had a vision of Jesus in the hospital, she wrote a letter to her doctors asking to stop treatment.

“I am writing this letter to tell you that this chemo is killing my body and I cannot take it anymore.”

She left chemotherapy treatment while in remission to pursue alternative and traditional indigenous medicine.

And from the Globe and Mail:

Makayla, who suffered from acute lymphoblastic leukemia, stopped chemotherapy in May because of the side effects of the drug. She had told her parents, Ken and Sonya Sault, who are pastors, that Christ had appeared in her hospital room to tell her she was healed.

. . . Mr. LaForme said her parents are holding up well considering their loss and do not regret taking Makayla off chemotherapy.

“From Day One they have never regretted the decision,” he said. “As a matter of fact, they wish that they had never even gone through the chemo in the first place.”

I’ve studied many of these cases—they figure largely in the last chapter of my Faith versus Fact—and one common feature of parents whose children die after they receive faith healing or alternative medicine is this: a curious lack of parental affect and regret. “I am a good parent,” they often say. They’re not; they’re ignorant parents who, if they really wanted to save the child’s life, would do the proper legwork.  In fact:

The parents self-servingly blame Makayla’s death on the chemotherapy. From the CBC:

“Makayla was on her way to wellness, bravely fighting toward holistic well-being after the harsh side-effects that 12 weeks of chemotherapy inflicted on her body,” the family statement reads. “Chemotherapy did irreversible damage to her heart and major organs. This was the cause of the stroke.”

They were wrong. Here’s a counter-statement from the same article:

Although her family claims her death was due to chemotherapy, in September, a McMaster oncologist testified that Makayla had suffered a relapse. The doctor also testified that there are no known cases of survival of ALL without a full course of chemotherapy treatment.

And here’s a comment below the CBC story. (I’m not a doctor but show this so that any physician reading this can comment):

Makayla, and another Ontario First Nations child ill with leukemia, were treated at a quack Florida clinic. From the CBC:

In July, Makayla travelled to the Hippocrates Health Institute in Florida and took its three-week “life transformation program.” A CBC investigation revealed that Hippocrates is licensed as a “massage establishment,” and is being sued by former staff who allege the company’s president Brian Clement is operating “a scam under Florida law” and practising medicine without a licence.

The other sick child, “J. J.”, is being “treated” at the clinic, and this is what the treatment involves:

In an interview with CBC News, [J.J.’s] mother said, “This was not a frivolous decision I made. Before I took her off chemo, I made sure that I had a comprehensive health-care plan that I was very confident that was going to achieve ridding cancer of her body before I left the hospital. This is not something I think may work, this is something I know will work.”

The Canadian Medical Association Journal approves of Makayla’s “treatment.” This is perhaps the most odious part of the whole mess, for Canada’s premier medical association has approved what the parents and government did to this poor child. As The Globe and Mail reports:

Makayla died on the same day that an editorial in the Canadian Medical Association Journal (CMAJ) said the country’s health-care system must respect aboriginal healing traditions, which are deeply valued ancestral practices.

Authors Lisa Richardson, an internal medicine specialist who is a leader of the University of Toronto’s office of indigenous medical education, and Matthew Stanbrook, a respirologist and deputy editor of the CMAJ, wrote that many indigenous Canadians feel unwelcome or unsafe in regular medical institutions.

“To make medical treatment acceptable to our aboriginal patients, the health-care system must earn their trust by delivering respect,” they wrote. They pointed to J.J.’s case saying, although some people took issue with the judge’s ruling, “it appears to have been a thoughtful decision addressing a complex area of law.”

“Thoughtful”? Really? If you can bear it, go over and look at that article (free online), “Caring for Aboriginal patients requires trust and respect, not courtrooms.” It’s a sickening paean to the worst aspects of multiculturalism: the assumption that all beliefs are equally worthy of respect. Here’s a quote from Richardson and Stanbrook’s article:

Medical science is not specific to a single culture, but is shared by Aboriginal and non-Aboriginal people alike. Most Aboriginal people seek care from health professionals — but nearly half also use traditional medicines. Aboriginal healing traditions are deeply valued ancestral practices that emphasize plant-based medicines, culture and ceremony, multiple dimensions of health (physical, mental, emotional and spiritual), and relationships between healer, patient, community and environment. These beliefs create expectations that Aboriginal patients bring to their health care encounters; these must be respected. Doing so is not political correctness — it is patient-centred care.

No, it’s not patient-centered care; it’s culture-centered care, meant to treat a culture rather than the sick. And it’s political correctness of the worst stripe: a form that can be fatal. It is kowtowing to false beliefs for fear of offending an ethnic minority.

It disgusts me that two Canadian physicians can endorse “alternative medicine” because modern medicine causes distrust in some native peoples.  But really, is securing trust among all of them worth the lives of their children? How can Makayla’s parents live with themselves knowing that their daughter had a substantial chance of still being alive had they trusted modern medicine? Are they inhuman? No, they’re human; they were just corrupted by their faith.

And Canada, your government sucks. How many more children must die before you curb your own unwarranted approbation of faith?

I posted last November about Canadian judge Gethin Edward’s decision to reject a request from a Hamilton hospital to continue “J.J.’s” chemotherapy after her family wanted it discontinued in favor of “traditional medicine”. The judge said this:

“I cannot find that J.J. is a child in need of protection when her substitute decision-maker has chosen to exercise her constitutionally protected right to pursue their traditional medicine over the Applicant’s stated course of treatment of chemotherapy,” Edward said, as he read his ruling aloud.