I’ve just learned that there will be no internet where I’m staying for the next 11 days, so, barring a fortuitous Starbucks or any establishment with free internet, you won’t hear from me for a while. I’ve asked my emissaries to keep things going as best they can, so keep the faith. And here’s the last post for a while:

Over at her website, in a post called “A small tragedy,” Sarah Honig tells the story of Abramek (“Abraham”) Koplowicz (1930-1944), a Polish boy from Lodz who, because he was Jewish, was confined with his family in the ghetto by the Nazis. During that time he wrote poetry and painted, and was quite good at both, though he was only 13 when he produced what’s below.

The story of Abramek and how his poems were saved by his stepbrother Eliezer Grynfeld is fascinating, and given in detail by Ms. Honig.  Here are two relevant paragraphs from the longish post:

. . . the boy’s father, Mendel Koplowicz, labored at a workshop producing cardboard boxes for the Germans. An ordained rabbi, he became a confirmed atheist after reading many secular philosophy books. Abramek worked at a shoe-making workshop, occasionally showing up at his father’s workshop to entertain the laborers by reciting poetry and satirical skits in verse. The handsome boy delighted his listeners, who unanimously agreed that he was a genius. One of those who heard him was Haya Grynfeld, Lolek’s mother and Mendel Koplowicz’s co-worker.

When the Koplowicz family was taken to Auschwitz, the mother, Yochet Gittel, was immediately sent to the gas chamber. The father and 14-year-old Abramek were sent to forced labor. But as he left for work, Mendel Koplowicz left his son in the barrack in order to protect him from the ordeal. Upon his return, he found it empty. The Germans had come and sent all those inside to death.

It’s ineffably sad that such a child (or any child) was plucked from the tide of life by the Nazis. If you want a real gut-wrenching experience, go to Anne Frank’s house in Amsterdam and see the pictures she pasted on her wall while hiding from the Germans in their “annex”. Also deeply moving is the “height record” on the wall that her parents kept of their children as they grew during the two years in the annex.

Anne and her family were, of course, also captured, and she died of typhus in the camps at the age of 15. The Diary of Anne Frank may be somewhat overexposed, and represents only one child among millions of the exterminated, but because she, like Abramek, left behind her words and feelings, we get an idea of what was snuffed out in the gas chambers.

Here are two poems by the 13-year-old Abramek, translated from Polish into English by Sarah Lawson and one of Hili’s staff, my dear friend Malgorzata Koraszewska. They are from the collection of Eliezer Grynfeld, and are published here with his permission.

When I am twenty years of age,
I will burst forth from this cage
And begin to see our splendid Earth
For the first time since my birth!
In my motorized bird I’ll soar so high
Above the world, up in the sky,
Over rivers and the seas,
With such stupefying ease,
With my brother wind and sister cloud, I’ll
Marvel at the Euphrates and the Nile;
The goddess Isis ruled the land that links
The Pyramids and the massive Sphynx.
I will glide above Niagara Falls,
And sunbathe where the Sahara calls;
If I want to escape the scorching heat,
I will fly up north to an Arctic retreat.
I will top the cloudy peaks of Tibetan fame
And survey the fabled land whence the Magi came.
From the Island of Kangaroos
I’ll take my time and cruise
To the ruins of Pompeii
At the edge of Naples Bay,
I’ll continue to the Holy Land, then seek
The home of Homer, the celebrated Greek.
More and more astonished will I grow
At the beauty of the Earth below.
In all my travelling I’ll be twinned
With my siblings, cloud and wind.

All those dreams were, of course, never fulfilled. Here’s part of the manuscript of the poem above: 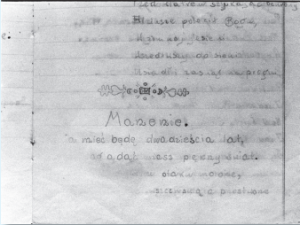 The only picture of Abramek:

In a peaceful hamlet Berele and his parents led contented lives
Until one fine day bad news arrives:
Mobilization! War has been declared!
Will they take her son? Deep in her soul the mother’s scared.
Suddenly her worst fears come true; Berele is called up to fight.
He bids his parents farewell. His throat feels strangely tight.
He tears himself away from the familiar domestic scene,
For Berele is a man now, not a boy; he’s turned eighteen.
Berele fights valiantly in the dark fog of war
And is promoted to a member of the officer corps.
Now a battle is raging, soldiers are dying;
Thousands have fallen, but the flag is still flying.
Cannons roar, grenades explode, the din is mad,
But in Berele’s heart he longs for home and mum and dad.
His homesick longing must be that pain in his chest,
But no, it’s a bayonet. The bullets fly—he’s going west.
He is trampled in the mud; he cannot rise.
“Goodbye mother and dad,” he whispers as he dies.
Back home in the hamlet, after many years hope still makes them run
To every man coming up the road; he could be their beloved son!
But it’s always a stranger. “Time heals all wounds”, but it hasn’t done.
The father dies from longing for his son, but the mother will not rest.
In her dreams she kisses him tenderly and clasps him to her breast. 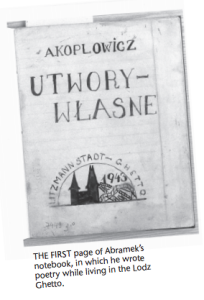