There is at least one species of bird that is toxic to predators and shows it off by displaying bright “aposematic” (warning) colors. That one, the hooded pitohui of New Guinea (Pitohui dicrhous), was discovered to be toxic by Jack Dumbacher, one of our grad students at Chicago, and now Curator of Ornithology at the Cal Academy in San Francisco. As I recall, Jack noticed this when handling one of the birds and getting a tingling sensation in his hands. He later discovered that the feathers contain a neurotoxin, probably obtained by eating toxic beetles and spreading saliva over its feathers.  Here’s a photo of the hooded pitohui from New Guinea Birds: 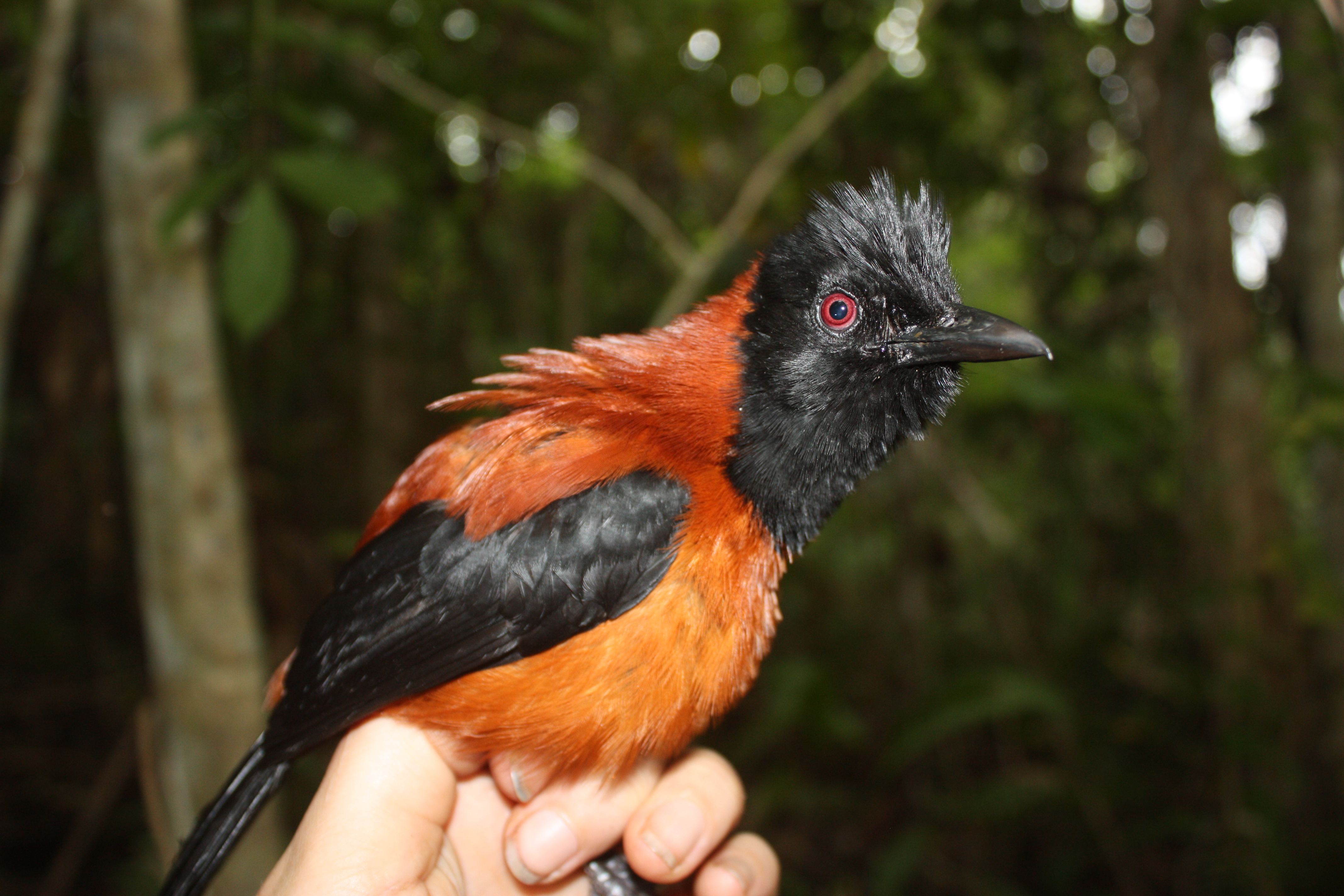 We were all amazed when Jack discovered what was the first—and perhaps still the only—case of a toxic bird showing off its distastefulness with bright colors.  But now a group of researchers from the U.S. and Colombia have discovered a bird in Peru whose nestlings (but no the adults) are not only brightly colored, but appear to have both the appearance and behavior of a toxic caterpillar that lives in the area. These traits of the nestlings are possible examples of Batesian mimicry, in which an edible species mimics a toxic and brightly-colored one that is avoided by predators who have learned to associate the color and pattern with toxicity. The nestlings thus take evolutionary advantage of the predator’s aversion, and so the resemblance is adaptive and one that is favored by natural selection. The nestling, in effect, mimics a caterpillar that is like a pitohui.

The possible case of Batesian mimicry is described in a new paper in The American Naturalist by Gustavo Londoño et al. (reference and link below). The conclusions are tentative, but the resemblance of the nestling to the caterpillar is amazing. Nestlings are very vulnerable to predation; the authors report that predators destroy 80% of the nests before the young fledge.

First, some movies taken by the researchers to show the resemblance. Here’s the toxic caterpillar from Manu National Park in Peru:

Now have a look at the presumed mimicry of the nestlings of Laniocera hypopyrra, the “cinerous mourner”; this is their behavior when they sense movement nearby (like the bird below, the caterpillars also move their heads from side to side).

Note too how different the juveniles look from the adults. They’re orange and covered with white-tipped filamentous feathers, while the adults look like this:

The huge difference between the appearance and color of the nestlings versus adults suggests that the nestlings have evolved to have that bizarre plumage for reasons that enhance their survival. It had been suggested earlier by other workers that the nestlings’ appearance might reflect selection to mimic a caterpillar, but such an insect hadn’t been found. It had also been suggested that the color could resemble moss-covered fruits or dead leaves, and so would provide camouflage rather than enhanced visibility.

Here, from the paper, is a picture of a one-day-old nestling, both by itself (left) and with an unhatched egg.

The authors note the distinct plumage of nestlings, shown below at day 9 (left) and day 14 (right):

At hatching, the Laniocera hypopyrra nestling was covered with orange down (fig. 1a), a very different plumage coloration compared to that of gray adults. Each downy feather had 1–10 elongated orange barbs (fig. 2), each of which had a bright white tip (figs. 1, 2). These plumage characteristics are unique among the 120 species of nest- lings we have observed at this study site. Unlike most altricial nestlings, the L. hypopyrra chick did not beg immediately when the parent arrived at the nest with food. Similarly, when we took the nestling out of the nest for measuring, it did not beg for food as other nestlings do. In another uncommon behavior among altricial birds, the parent spent long periods of time at the nest rim after arriving with food but before delivering the food to the nestling.

This delayed begging behavior may reflect the fact that the nestling doesn’t know if the arriving bird is a predator or a parent, and so performs the default “caterpillar” behavior to scare off the former. Parents are presumably used to the behavior.

Below are the chick at day 18 (left) and the caterpillar, a larva of a flannel moth (family Megalopygidae), so called because the adult moths are fuzzy. The species is unidentified, I think, but some caterpillars in the family are known to be toxic. The authors further emphasize the resemblance:

Here the authors show the unusual barbs at the tip of the feathers, which enhance its resemblance to the caterpillar. 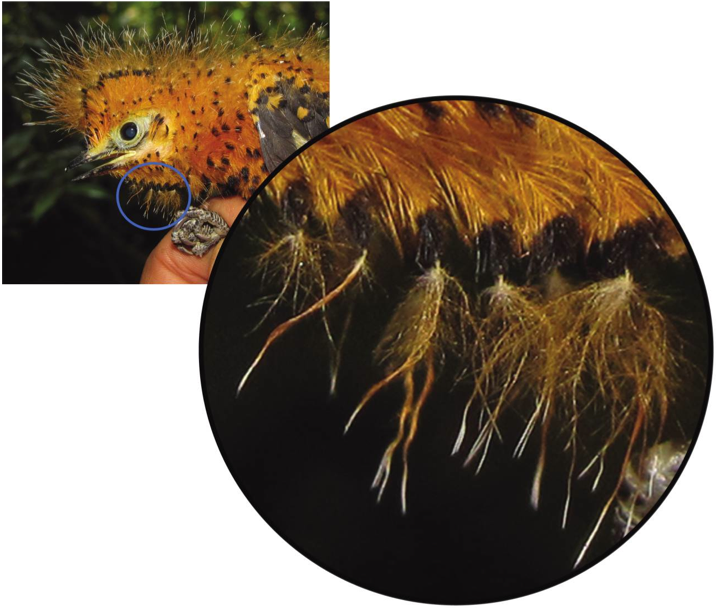 And a final picture of the bizarre nestling, which loses this appearance when it gets older and molts its juvenile plumage. 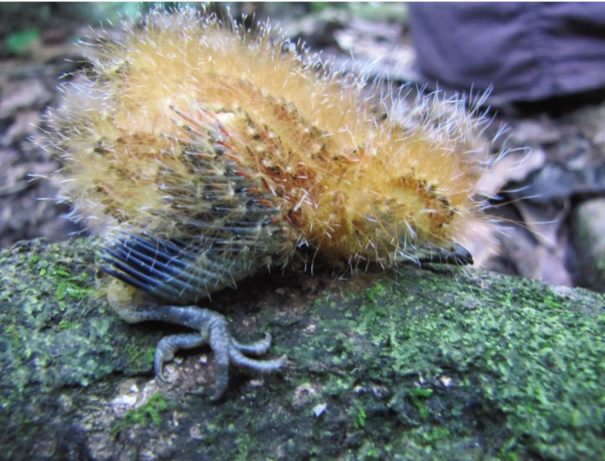 Now this is only a suggestive resemblance, but it’s pretty amazing, and if true would be the first bird to show Batesian mimicry of any toxic species. Several questions remain to be answered, though, before we regard this as a strong case.

For the time being, then, we have a good natural-history observation that is very suggestive of Batesian mimicry, but needs further research to substantiate it. I suspect, based on the resemblance, that it is indeed the first known case of Batesian mimicry in a bird, and that is simply an amazing thing to see—especially because what has evolved is not just the nestling’s appearance, but its behavior.

________
Londoño, G. A., D. A. García, and M. A. S. Martínez. 2014. Morphological and behavioral evidence of Batesian mimicry in nestlings of a lowland Amazonian bird. The American Naturalist, early publication.

36 thoughts on “A stunning (possible) case of mimicry: bird nestling resembles a toxic caterpillar in appearance and behavior”