Along with some sociologists, I’ve long suspected that religiosity in today’s world derives largely from uncertainty in one’s life. This is based on several sociological studies of religion, showing striking positive correlations between social dysfunction and religiosity (the worse off a society, the more religious its members), combined with evidence that religiosity fluctuates with social dysfunction, but lags a year behind it, which suggests that if there’s a causation, it’s dysfunction driving religiosity and not the other way around.

This conclusion seems to be confirmed by a new paper in Proc. Nat. Acad. Sci. by Carlos Botero et al. (reference at bottom; I’m not sure if there’s a free download at the link). But this conclusion is hidden in a welter of statistics, and the purpose of the paper seems to be to show more than simply a relationship between societal uncertainty and religiosity. The paper seems aimed at showing that societies are more moral when they accept a “moralizing high god.” But it doesn’t show that. You can imagine who funded this paper, but more on that later.

The authors begin by citing earlier claims that religion helps societies behave properly, and also reduces cheating (this is from the usual psychological lab tests); but they also note that those claims may have some problems. In other words, they motivate their studies by seeing if their newer analysis will support “belief in belief” (although it doesn’t). Here’s a paragraph that includes the usual claim that psychological studies show that religious belief (like belief in free will) prevents cheating (I’ve eliminated the references, which you can see by accessing the paper.)

In particular, religious beliefs are thought to be a powerful mechanism for the enforcement of social rules. In support of these ideas, comparative studies have shown that a belief in moralizing high gods—defined as supernatural beings believed to have created or govern all reality, intervene in human affairs, and enforce or support human morality—tends to be more prevalent among societies that recognize rights to movable property, as well as in those that exhibit higher levels of political complexity, subsistence productivity, and norm compliance. In addition, psychological experiments have found that moralizing high god concepts can reduce levels of cheating and increase willingness to be fair and to cooperate. Such findings have provoked speculation that the prominence of moralizing gods at the level of cultures is a better predictor of cooperation in humans than individual religious beliefs. However, debates persist because statistical models assessing historical and regional dependencies are rare, and those that exist are limited in scope.

But the data they gathered doesn’t address this hypothesis. Rather, the authors wanted to see what aspects of societies make them more or likely to believe in “moralizing high gods.” Here’s a quick summary:

The authors whittled the data down to information from 389 societies. Their models showed this:

The authors conclude what others have before them: societies that are worse off, and ones in which you know you’re going to remain that way because conditions are static, tend to be more religious. Further, societies that have concepts of personal, moveable property (i.e., your own livestock) also tend to be more religious.  But I wish they’d measured other variables as well, such as income inequality and “social stability.” Does animal husbandry correlated in a positive way with income inequality, something itself strongly correlated with religion? Why did the authors neglect other social factors to concentrate on those they consider “ecology”? Here’s their main conclusion (my emphasis):

In general, our findings are consistent with the notion that a shared belief in moralizing high gods can improve a group’s ability to deal with environmental duress and may therefore be ecologically adaptive. Philosophers have long hypothesized that the belief in morally concerned deities can reduce both anxiety  and existential suffering, and that environ- mental harshness can increase the appeal of a cosmic authority. Accordingly, we have uncovered robust evidence of a positive association between societal acceptance of moralizing high god concepts and both resource scarcity and ecological risk.

The philosophers cited are Feuerbach (Lectures on the Essence of Religion) and Marx (Marx on Religion), showing once again that philosophers like Marx got the reasons for religiosity largely correct.

What’s curious about the paper, though, is that after finding some ecological correlates of religion, the authors go ahead and plump for “belief in belief,” claiming (though they said earlier that this is not strongly supported) that belief in moralizing high gods is good for society. The bold bit in the quotation above makes a claim that is unsupported by the authors’ data, even if it does support Marx’s own historical analysis. Here’s another quote from the paper (my emphasis):

. . . our finding that the recognition of rights to movable property is a better predictor of the global distribution of belief in moralizing high gods than agriculture (Table 2 and Supporting Information), is consistent with the idea that the prosocial effects of moralizing high gods are not specific to very large (“ultrasocial”) communities.

“Prosocial effects” of course, means “effects (behaviors in this case) that are good for society in general.”

So we see that the authors seem to be pushing a view that religion is a good thing because it helps people deal with poor ecological circumstances. That’s no surprise given who funded the work. Here are the acknowledgments:

Yep, that’s right: Templeton got its sticky mitts on this research. I also object to the participation of the National Evolutionary Synthesis Center, which is funded by the National Science Foundation (NSF). There’s no evolution at all in this paper except for cultural evolution, and the NSF shouldn’t be entangling itself with Templeton.

My main objection to the work is not with the results—which, though woefully incomplete in completely neglecting (and neglecing to mention) the social motivations of religiosity—but with the authors’ preoccupation with the notion that religion is good for buffering against suffering. Even if that’s true, it can’t remedy suffering due to poverty or uncertainty, and hence whatever religion does, it needs to be replaced by social conditions that eliminate the need for religion. If you have a toothache, aspirin might relieve the pain for a while, but you need an extraction or a root canal to get rid of the problem permanently.

You may remember this famous quote from Marx in his A Contribution to the Critique of Hegel’s Philosophy of Right:

But this recognition should always be followed with another quote from Marx, from Theses on Feuerbach:

The philosophers have only interpreted the world, in various ways; the point is to change it.

That quote is inscribed at the bottom of Marx’s gravestone in London’s Highgate Cemetery: 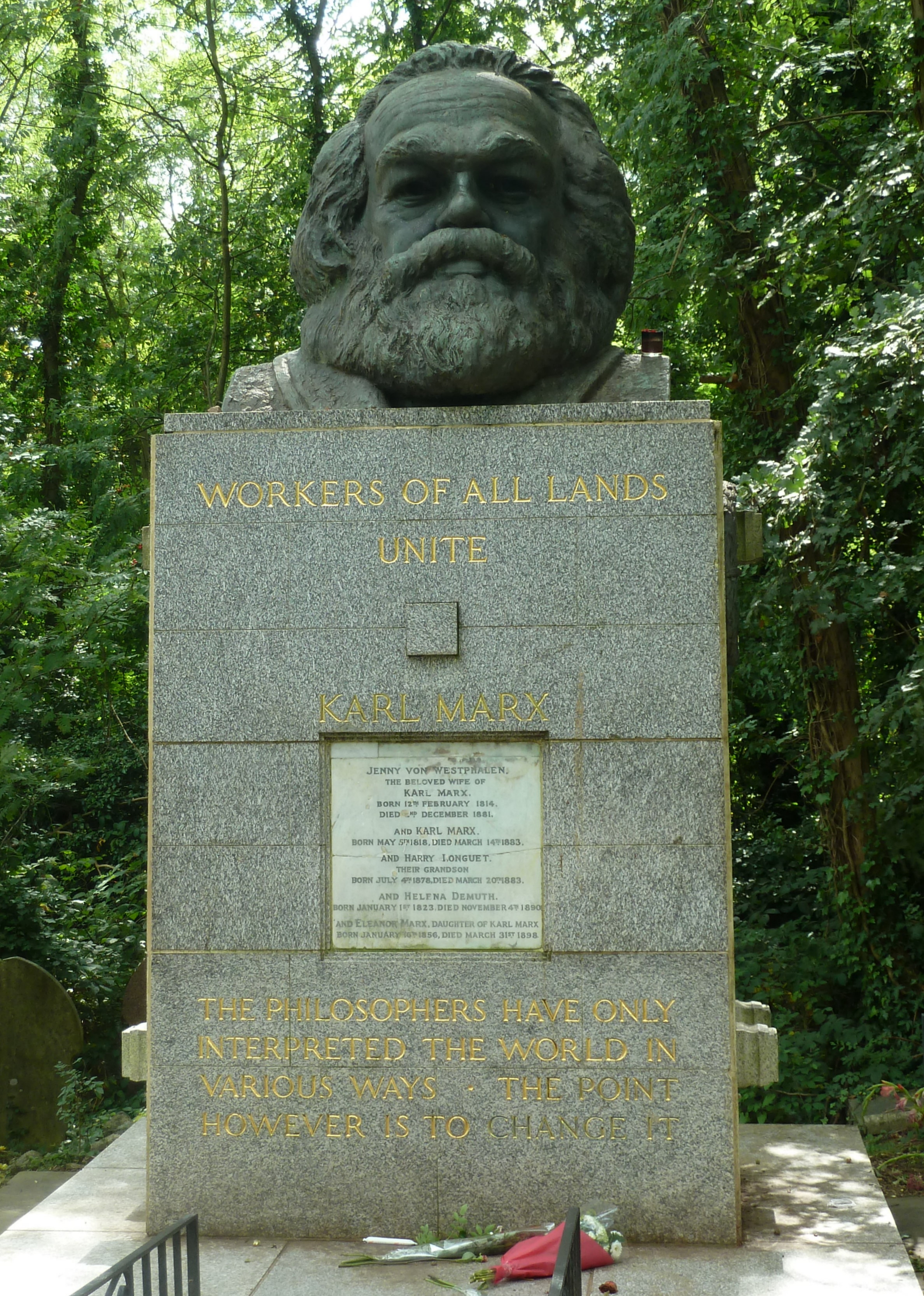 Templeton—and perhaps Botero et al.—want us to see religion as a good thing: a “prosocial” glue for humanity. In contrast, I see religion as something keeps us stuck in fictional claims that, by promising a better world in the hereafter, impede human progress in the here and now. The point is to change the world, not just explain it.
________

66 thoughts on “The ecology of faith: what makes societies religious?”