While the Guardian and the Independent are busy exculpating Islam from any misdeeds that we deluded “Islamophobes” attribute to the faith, we must to go to the Times of London—a conservative paper—for the truth.

Reader Coel was alert enough to notice that an article on the nature of “real Islam,” once behind the Times’s paywall, has now been published for free by Britain’s National Secular Society: “Who are the true Muslims—all or none?“, by Matthew Syed. It’s a great pity that to find honest statements about the dangers of Islam, or even the mundane conclusion that, in all its variety, there’s no “true” version of the faith, we must go to right-wing venues. (One exception: I reached the same conclusion in a September piece in The New Republic, “If ISIS is not Islamic, then the Inquisition was not Catholic“.)

And here is the truth (from Syed’s article):

Who are the real Muslims? Who are the bona fide, authentic, true-to-the-core followers of the Islamic faith? Now, that might seem like an easy question. Surely, the people who are Muslims are those who say, when asked: “I am a Muslim.”

But there is a problem with this approach. As you may have noticed, Sunnis, many of them, tell us that they are the real Muslims and that the Shias are impostors. The Shias tell us the exact opposite. The Sufis have a quite different perspective: they reckon that both the Sunni and Shia brigades have it wrong, and that they have it right.

Some Muslims are pretty ecumenical. There are moderate Muslim groups in the UK who say that Islam is a broad church. They say they don’t really have a problem with Sunni or Shia. But guess what? They don’t extend this embrace to Islamic State (Isis). They describe its approach as “a perversion of Islam”.

Barack Obama and Tony Blair have it in for Isis, too. Blair said that Isis possesses “an ideology that distorts and warps Islam’s true message” while Obama went even further, saying: “[Isis] is not Islamic. No religion condones the killing of innocents, and the vast majority of [its] victims have been Muslim . . . [it] is a terrorist organisation, pure and simple.”

I like the way Syed draws distinctions between how science finds truth and how religion, since it’s based on faith and dogma, is unable to discern any “truth”, for reliance on faith leads to thousands of different religions with conflicting dogmas. This is one of the themes of the Albatross. It’s hardly novel, or even controversial—except to believers and faitheists:

You see, the idea of “real” and “false” Muslims is ephemeral. With something like science, people who disagree with each other examine the evidence. They debate, they argue, they perform experiments. Sadly, this approach is not available for religious disputes. People with theological differences tend to appeal to divine revelation and differing interpretations of manuscripts that were written centuries ago. This is a problem when it comes to resolving differences, particularly when those manuscripts contain passages that seem, on a cursory reading, to condone violence.

It is no good Blair or Obama, or anyone else, saying that Isis has got it wrong, or that it is distorting Islam’s “true message” because, when it comes to religious truth, there is no such thing as “wrong” — unless, of course, you happen to be the one person, one group, one faction, that is wired up to God. And think of the hypocrisy, too. Blair is a Catholic. He doesn’t believe in Allah (unless he is the same as Jehovah/Yahweh/the God of Moses). Nevertheless, he feels entitled to rule on the question of who are Allah’s chosen people. In other words, he is happy to second guess the views of a deity he thinks is fictional.

Finally, while I dislike reproducing a lot of other people’s text without giving some added value, what can one add to this?:

Instead of pontificating on who are the real Muslims, isn’t it time to acknowledge that the entire debate
is senseless?

Moderate Muslims would not like such a stance, of course. They would hate to be told that their interpretation of Islam is no more legitimate than that of Isis. But the alternative is far worse because it perpetuates the idea that there is a rational means of figuring out which of the subgroups has a hotline to God.

This takes us to the elephant in the room. The fundamental problem in the Middle East today is not with the Sunni or the Shia or even with Isis. The problem is with religion itself. It is the idea of received wisdom, divine revelation, the notion that “I have heard the Truth” and that everyone else is deluded. This is the corrupting, anti-rational, distorting engine of religious violence in the Middle East, just as it once triggered Christianity into a bloody civil war.

Truth divorced from evidence (or anything that counts as evidence) is perilous. Religion is not the only cause of violence, of course, but it has a particular virulence.

Christianity has improved its record on violence in recent centuries, but only because it has become less religious. The farther it has retreated from the idea of revealed truth, the less it has killed people who take a different view. Most Christians today associate truth with evidence, reason and other Enlightenment ideals.

For all the debate over foreign policy, this is the only solution to the bloodshed in the Middle East, too.

And that is one reason why people like Maajid Nawaz are trying to get Muslims to become less extremist, to take the Qur’an as more allegorical than factual.  I wish them luck, but have little hope—given the data on how many Muslims take the Qur’an as the literal word of God—that such “metaphorization” will succeed. Only centuries of immersion in the world’s rising tide of secularism—and not a few lectures on how Islam can be interpreted benignly—will turn those believers around.

Here are some depressing data from the recent Pew Survey on the world’s Muslims: 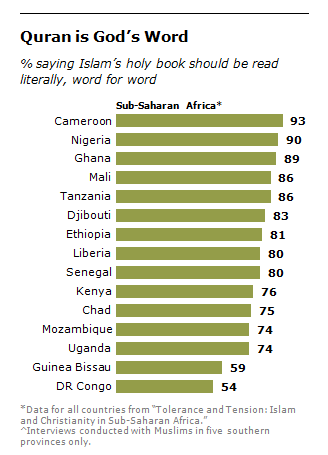 So here’s a quiz question on all the above:

Q: How are Steve Gould, the National Center for Science Education, the National Academy of Sciences, and the American Association for the Advancement of Science like Tony Blair and Barack Obama?

A: They all claim they know what “true” religion is.

It’s time for politicians and science organizations to stop their endless nattering about what “true religion” is. Many science organizations, for instance, often issue statements that real religion has nothing to say about the character of the natural world, and therefore is distinct from and harmonious with science (usually evolution). That, of course, is pure hogwash. Such pontification is also a form of theology: scientists telling believers about the nature of “true faith.” Science organizations (and politicians) have no business doing that. Leave the dirty and inconclusive lucubrations of theology to the theologians. Trying do discern which religion is “true” is like trying to discern which is the truer fairy tale: Red Riding Hood, Beauty and the Beast, or Jack and the Beanstalk.

In his book Rocks of Ages, which proposed the infamous “NOMA hypothesis” for reconciling science and faith, Gould said the same thing about “true” faith, adding the equally ridiculous claim that any discussion of meaning, morals, and values falls purely in the bailiwick of religion. Surely Gould, a polymath, knew of the long history of purely secular discussion of philosophical and ethical issues. But, like Blair and Obama, he had no problem with distorting the truth in the interest of osculating the rump of faith. Sadly, as Syed realizes, osculation won’t end the disasters in the Middle East.

112 thoughts on “The Times calls it like it is on Islam: there’s no “true” version”