UPDATE (2/27/2017): In view of later work, the results of this paper should be considered inconclusive. A new paper in PLoS ONE by Sanchez et al. failed to replicate one of the four experiments of Gervais and Norenzayan (the statue experiment), getting results not even close to significance. Further, an analysis of psychology papers published in Science showed that the Gervais and Norenzayan paper was one of 15 examined (out of 18) that had a success rate much higher than expected (this could be due to a number of factors). The Sanchez et al. paper, however, does report two other studies that replicated some of the results of Gervais and Norenzyan. In view of these conflicting results, it’s best to suspend judgement on the paper described below.
___________

Atheists, but not religious people, will love this paper from the latest Science, “Analytical thinking promotes religious disbelief,” (reference below) by Will Gervais and Ara Norenzayan, two psychologists from the University of British Columbia (see also this popular summary in the Los Angeles Times). It shows that there’s an antagonism between analytical thinking and religious belief, such that after engaging in even a short and simple task requiring analytical thinking, one’s faith in God weakens.

As the paper is written clearly, I’ll quote a bit from it rather than paraphrase it. Here’s the authors’ rationale:

If religious belief emerges through a converging set of intuitive processes, and analytic processing can inhibit or override intuitive processing, then analytic thinking may undermine intuitive support for religious belief. Thus, a dual-process account predicts that analytic thinking may be one source of religious disbelief. Recent evidence is consistent with this hypothesis finding that individual differences in reliance on intuitive thinking predict greater belief in God, even after controlling for relevant socio-demographic variables. However, evidence for causality remains rare. Here we report five studies that present empirical tests of this hypothesis.

Here are the studies.

Study 1.  The authors gave 179 undergraduates an “analytical” thinking test consisting of three questions, each of which had an incorrect “intuitive” answer and a correct “analytical” answer. Here’s one of the questions:

The participants then completed an assessment of their religiosity, including three different tests. The result?

In study 1, as hypothesized, analytic thinking was significantly negatively associated with all three measures of religious belief, r[Religiosity] = –0.22, P = 0.003; r[Intuitive] = –0.15, P = 0.04; andr[Agents] = –0.18, P = 0.02. This result demonstrated that, at the level of individual differences, the tendency to analytically override intuitions in reasoning was associated with religious disbelief, supporting previous findings.

Study 2.  A group of Canadian undergraduates were exposed to one of four randomly chosen images, two of which depicted contemplative activity and two showing control artwork matched for posture and surface texture.  Here are two pictures, one of each type: 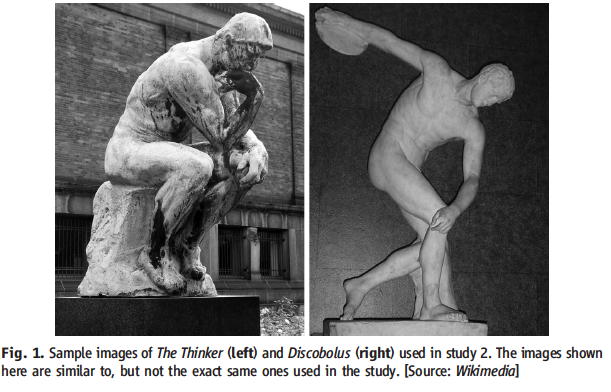 After viewing their random image, each student rated his/her belief in God on a scale from 1-100.

Well, that’s a marginally significant probability value, and they talk only about the Rodin image, though presumably there was at least one other contemplative image.

Study 3.  93 Canadian undergraduates scored their degree of religious belief after completing “a modified verbal fluency task priming procedure previously used to activate analytic thinking without explicit awareness.” The participants got a set of five words, and were instructed to drop one word and arrange the others into a meaningful phrase.  Some sets included “analytical” words (i.e.,”reason,” “think”), and others non-analytical words (“hammer,” “jump”). There were 50 individuals in the analytical test and 43 in the controls.

Again, this is barely significant in a statistical sense. There was one control, showing that these results were not correlated with the degree of a student’s religious belief measured several weeks before the test.

Study 4.  This was the same as study 3,  but conducted on 148 American adults selected for a wide range of backgrounds (71 analytical, 77 control).  The results?

Now the authors consider these tests suggestive but not conclusive, saying this:

Nonetheless, experimental manipulations in studies 2 to 4 elicited analytic thinking by having participants perform one task or another (looking at pictures or unscrambling sentences) before rating their religious beliefs. Although unlikely, it is conceivable that the act of performing any task—not just tasks known to elicit analytic cognitive tendencies—may decrease religious belief.

Perhaps, but they had a non-analytic control, which does count as a “task,” and the analytical task significantly decreased religious beliefs. I’m not sure exactly why, then, they raise this point.

To try to obviate the need to assign a “task” to promote analytical thinking, the researchers then conducted

Study 5. Previous work had shown that even making people read something in a hard-to-read font improved their performance on analytical-thinking tests relative to the same thing presented in an easy-to read font.  So they asked students to just rate their religiosity, but using questions presented in either “hard” or “easy” fonts.  Here’s some samples they give:

Note again that the probability value (0.04) is very close to the cut-off value that defines statistical significance in biology (0.05).

And the overall conclusion:

. . . the hypothesis that analytic processing—which empirically underlies all experimental manipulations—promotes religious disbelief explains all of these findings in a single framework that is well supported by existing theory regarding the cognitive foundations of religious belief and disbelief.

In other words, the more analytically you think, the less religious you become, at least temporarily.

The authors offer three hypotheses about the precise way that analytical thinking erodes religious thinking. One, for example, is that analytical thinking makes people reflect on their “intutive” religious beliefs and reject them.  But let’s leave these aside for the nonce. In general, I find the study’s interesting and coincident with my intuition, but not terribly statistically significant.  Although each study gave a significant result, the probabilities are mostly marginal. Still, the paper is a useful starting point for further studies about the antagonism between analytical thinking and faith.

It’s notable that the authors bend over backward at the end of their paper to avoid criticizing religion: either the reviewers made them do this or they’re aware of how unpalatable these conclusion might be to the religious American public:

Finally, we caution that the present studies are silent on long-standing debates about the intrinsic value or rationality of religious beliefs, or about the relative merits of analytic and intuitive thinking in promoting optimal decision making. Instead, these results illuminate, through empirical research, one cognitive stage on which such debates are played.

Their nervousness is also evident in the last part of the paper’s abstract:

Combined, these studies indicate that analytic processing is one factor (presumably among several) that promotes religious disbelief. Although these findings do not speak directly to conversations about the inherent rationality, value, or truth of religious beliefs, they illuminate one cognitive factor that may influence such discussions.

I’m guessing that what we’re seeing here is two extremely nervous psychologists worried about a backlash from both the faithful and the believers in belief.   Of course these data speak to the rationality and truth of religious belief, for they show that if one thinks analytically about something—anything—religious belief tends to dwindle. That suggests that religious belief has a component of irrationality, and also that one’s confidence it religion tends to weaken when one is being analytical; i.e., there’s less truth value, if truth is gauged using analytical skills.

About the “value” of religious beliefs the study of course says nothing.  But we all know that most people wouldn’t be religious, and hence would derive no value from faith, if they were convinced that the tenets of religion were false.