BBC reporter Rebecca Morelle has been hot on the trail of the nearly extinct Hispaniolan solenodon in the mountains of the Dominican Republic. (There is another living species of solenodon in Cuba.) Here’s what they look like.

The BBC pursued them along with Dominican and British scientists, breathlessly recording their hopes of finding them, their adventures along the way, and their ultimate triumph (there’s also a kid’s version version of the story).  The BBC articles have many videos and pictures, including one of a cat (next to last photo) emerging from a solenodon burrow– the kittehs are eating them!

Solenodons are among my favorite mammals, not just because they are so bizarre in their own right, but for the zoogeographic lessons we can learn from them and other island animals. In WEIT (and earlier writings), Jerry, despite being a geneticist, emphasized the biogeographic evidence for evolution. In doing so, he was following a long tradition, dating back to Darwin and Wallace themselves. P.J. Darlington (from Jerry’s and my alma mater, the MCZ), perhaps the greatest zoogeographer of the last century, said that zoogeography showed Darwin evolution.

Island faunas, especially of oceanic islands (i.e. islands never connected to a mainland, such as the Galapagos), exhibit what I like to call the three “D’s”: they are depauperate (having fewer species than equivalent pieces of mainland), they are disharmonious in their taxonomic composition (major groups from the nearest mainlands are missing, while others are curiously diversified), and show evidence of dispersal (the taxa in the fauna are able to travel over water).

The terrestrial mammals of the West Indies are definitely depauperate (there are many fewer species on Jamaica than in an equivalent piece of, say, Honduras). And they are disharmonious: the only major terrestrial mammal groups in the West Indies are insectivores (solenodons, and another, recently extinct, genus Nesophontes, called island-shrews), ground sloths (also recently extinct), monkeys (again, recently extinct), and a couple of groups of rodents (some recently extinct, but a modest number of survivors). They are completely lacking the most diverse groups of the surrounding mainlands: carnivores, both large (cougar, jaguar, bear) and small (raccoon, skunk, coati), hoofed mammals (deer, tapir, peccaries), opossums, and others.

The signs of dispersal are less clear in West Indian mammals. Rodents disperse over water well (by what Darwin called “occasional means of transport”), as, oddly, do sloths (they crossed from South to North America before the Panama land bridge formed); but insectivores and monkeys are not known for water-crossing. If we add in bats, we do see clear evidence of dispersal in the many species shared between islands and mainlands. But overall, some zoogeographers have seen the insectivores and monkeys as perhaps relicts of a former land connection, and the argument over whether the West Indies are oceanic or old continental islands (islands once connected to continents, but so long ago as to obscure the faunal characteristics: Madagascar is a classic example) is an old one in zoogeography. Indeed, the West Indies contain oceanic islands (the Lesser Antilles) and even recent continental islands (Trinidad), so that Cuba or Hispaniola being old continental islands would just complete the range of possible faunal conditions.

Island faunas also show the two “E’s”: endemism (species being found on the islands and nowhere else) and extinction (island species go readily extinct when confronted by man, his habitat changes, and his many introduced species from the mainland). West Indian terrestrial mammals show high endemism (the solenodons and island-shrews are each endemic families, and there are others; no species is shared between islands and mainland), and also, regrettably, extinction: two of the four known solenodon species are extinct, and the living two are in trouble; about 80% of the 80 or so species of West Indian terrestrial mammals have become extinct in the last few thousand years.

Darwin (and Wallace) argued that all five of these “D” and “E” phenomena could be explained by descent with modification, creating a consilience of inductions: if organisms had to cross water barriers by occasional means of transport (floating, swimming, flying, etc.), rather than being created in situ, then some species and groups wouldn’t get there, those that did would diversify under different biotic conditions than those on the mainland, thus filling different places in the economy of nature, and thus not being adapted to the presence of mainland forms. 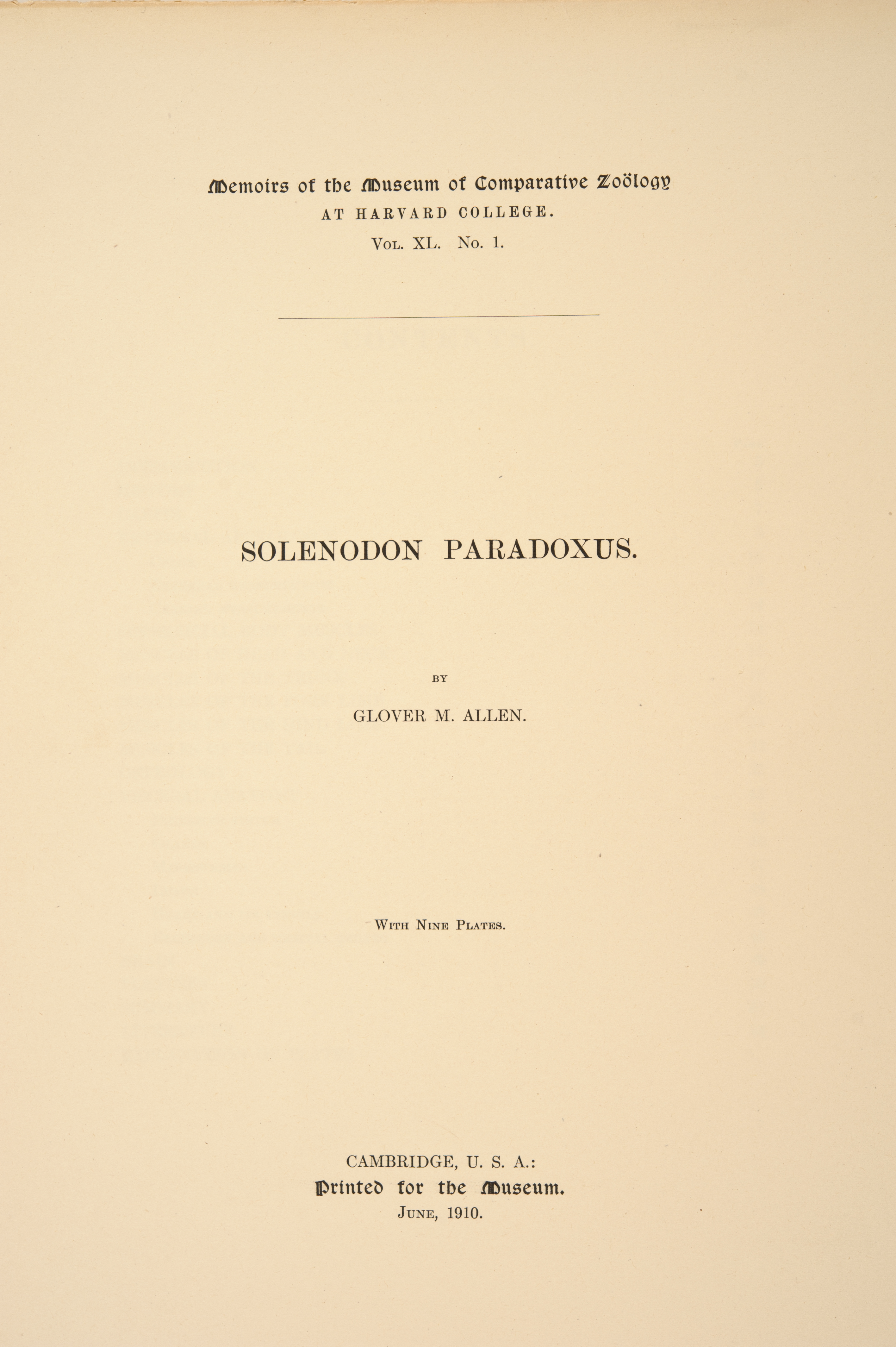 The plates here are from G. M. Allen’s classic 1910 monograph, published as one of the Memoirs of the Museum of Comparative Zooogy, on the anatomy of the Hispaniolan solenodon. Most have probably never been posted to the web, so I do so here.  Here’s a Hispaniolan solenodon at the Museum of Comparative Zoology, from an unsourced photo I found on the web; it is perhaps one of the specimens studied by Allen a century ago.. 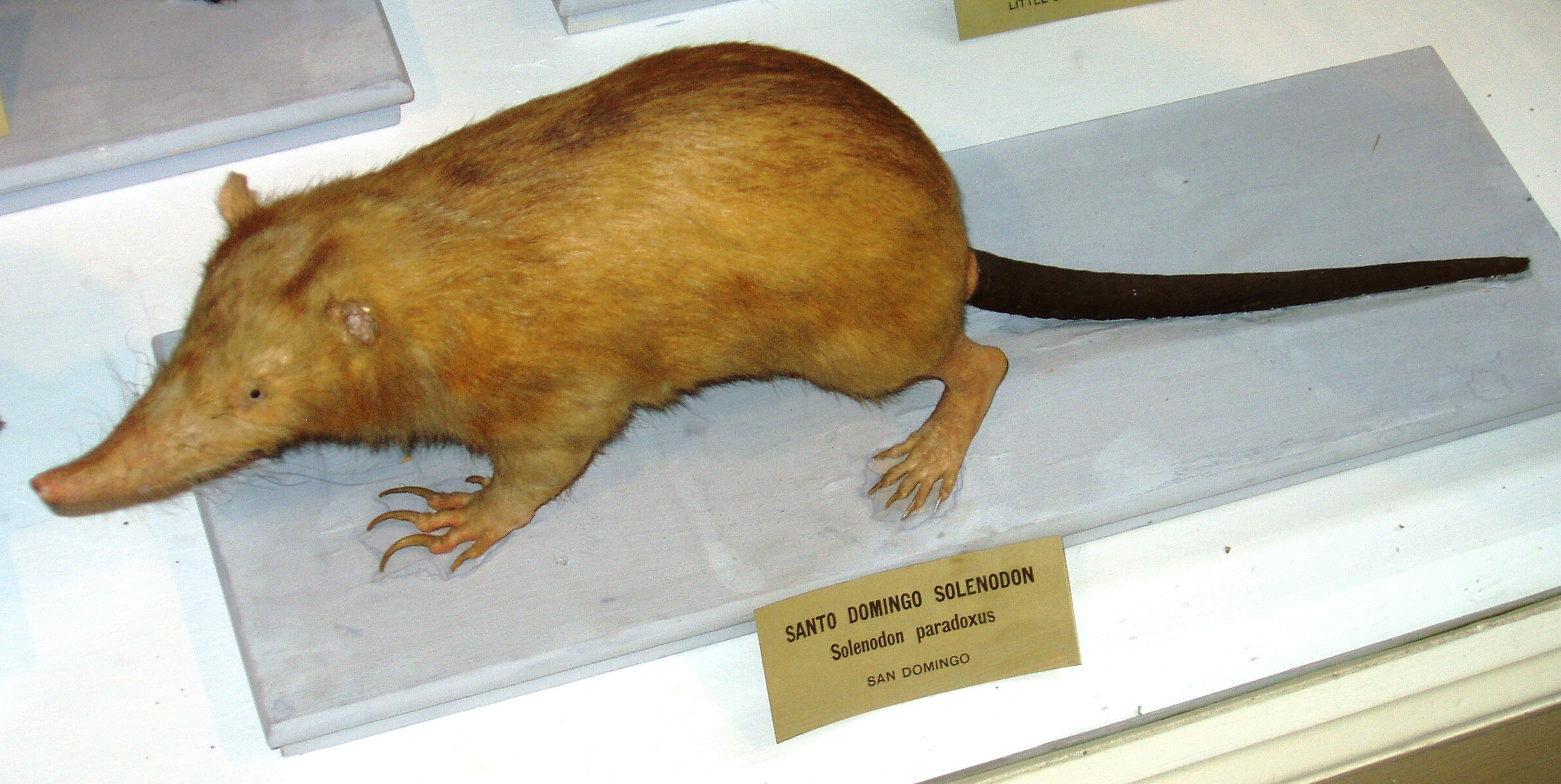 Solenodon paradoxus at the MCZ

Allen, G.M. 1942. Extinct and Vanishing Mammals of the Western Hemisphere with the Marine Species of All the Oceans. Special Publication No. 11 American Committee for International Wild Life Preservation.

5 thoughts on “Solenodons on the BBC”