There will be no readers’ wildlife feature this morning because I have a doctor’s appointment. In its place I’ll post an email from a creationist who wrote me today using his name. I easily found the person on the website of CREATION.com, the website of Creation Ministries International, an international organization partnered with the American Answers in Genesis, headed by Ken Ham, but there’s apparently a rift between them. The guy didn’t say no when I asked later if I could give his name, so I’ve now included it. It’s Matthew Cserhati, and you can read his creation bio here.

Wikipedia says this about the group:

Creation Ministries International (CMI) is a non-profit organisation that promotes the pseudoscience of young earth creationism. It has branches in Australia, Canada, New Zealand, Singapore, South Africa, the United Kingdom and the United States.

And a bit about them from their own page (have a look at their Q&A page, which is a hoot, and gives evidence that the Earth, as the Bible implies, is only about 6,000 years old). 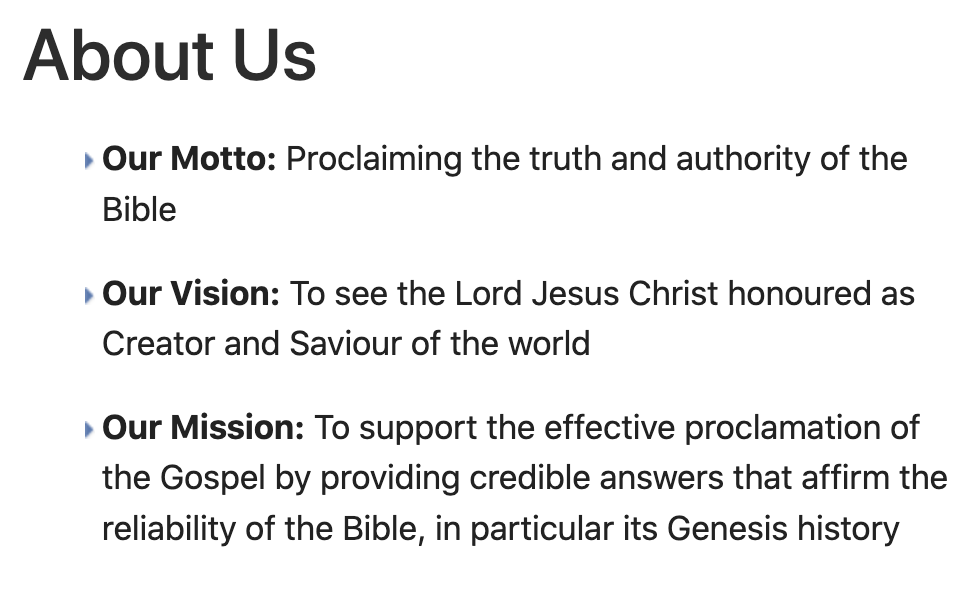 The email I woke up to this morning:

I am reading your book, Why Evolution is True.

You write about how different kinds of models show how evolution could have happened, but you skip the question, did evolution happen? That’s the thesis of your book: evolution is a fact and did indeed happen, but you never prove this. I find Voltaire’s quote about certitude being ridiculous itself ridiculous because science is knowledge. Not doubt.

You mention some corals which are allegedly billions of years old because they have 400 day-rings within an annual ring. Do you have corals from each epoch of evolution showing how this number decreases to our modern number of 365? This is essential because you need to demonstrate a linearly decreasing trend.

You also mentioned the number of ribs increasing for trilobites or the number of chambers increasing for bacteria. Are there any fossils that are half-trilobite, half something else? That’s what evolution needs to prove. Humans range between 2 feet and 8 feet, yet we are one species. I think your bacteria and trilobite examples prove nothing.

First, I don’t mention “chambers” in bacteria, which shows how closely he read.

It’s the same old palaver: one can document a fossil sequence (as I do for many organisms, ranging from foraminiferans to whales to humans), but unless you can show fossil evidence of every step in the pathway, you haven’t “proven” anything. Yet these people regard a made-up story implying a young Earth as “proof” powerful enough to stake their lives on! Is it not sufficient that we have intermediate or transitional fossils appearing right at the time they should: intermediates between fish and amphibians, amphibians and reptiles, reptiles and mammals on one branch, reptiles and birds on another, and, of course, between early apelike hominins and modern hominins? What better evidence of human evolution can we have than fossils of H. erectus or the australopithecines? Oh, I forgot, they’re either fully “apes” or fully “human”!

Well, if this creationism bought my book, at least I made a buck or so.

I’d like to ask Cserhti this question: “What, to you, would prove that the Earth was several billion years old and that evolution actually occurred?”  Dr. Creationist of course neglects the rest of the fossil evidence I gave, as well as evidence from biogeography, development, molecular biology, vestigial organs, and so on. The fact is that nothing will convince these poor saps that evolution occurred because they’ve sworn on the blood of Jesus that every word of the Bible is true.

Feel free to respond to this person, as I have their name and email and can forward this post and the comments to Cserhati.  Here’s his bio from the Creation Ministries website (a longer bio is here):

Dr Cserhati (pronounced Chair-hat-tea) came to Christ after high school in Hungary. But after studying biology at university, he struggled with harmonizing the book of Genesis with evolutionary theory he was being taught. After a few years of this struggle, and being exposed to information on creation, he came to understand that the evolutionary worldview and the Gospel are in opposition to one another, in that evolution uses death as a natural process, but according to the Bible, death is the last enemy, and a consequence of man’s sin.

After seeing how creation supports the biblical worldview and with it, the Gospel, he felt called to help the cause of creation ministry. After buying and reading material from the creation science movement, it only reinforced his view on how ‘real science’ supports the Bible, and that the Bible can be fully trusted in all areas of our life. He was active in establishing a creation science group in Hungary called the Protestant Creation Research Group in 2001.

Matthew has a Ph.D. in biology and has been an active creationist for 18 years and takes a great interest in molecular biology. He has published a number of articles in Journal of Creation.

He received a M.Sc. from the Eötvös Loránd University in Budapest in biology in 2003, and went on to receive a B.Sc. in software development and a Ph.D. in biology from the University of Szeged in 2010 and 2011. His doctoral thesis was about the development and application of a transcription factor dyad prediction algorithm. He is currently studying for an M.A. in religion from Greenville Presbyterian Theological Seminary. He also has certificates in five languages, and has done over 200 translation and interpreting jobs.

46 thoughts on “I get email from creationists”