I can’t remember how I found this 2020 article in the Journal of the American Psychoanalytic Association; I think it came from a reader but have no record. (If you sent it to me, thanks–I think!). Here Donald Moss, a member of the faculty at the New York Psychoanalytic Institute, and—at least when this was published—Chair of the Program Committee, American Psychoanalytic Institute, seems to have discovered white racism, which he calls “Whiteness” with a capital “W”. He also sees it as parasitic (on the objects of racism) and chronic—persisitent and nearly impossible to get rid of. He gives no convincing evidence for the impossibility of eradicating it within people, but draws that conclusion case studies of two of his patients. (Freud, of course, used his interpretation of his cases to buttress his phony “science.”)

Psychoanalysis is, of course, pretty much quackery, and the closer it is to the Freudian version, the more quackish it is.  I’m not sure if we can pin the obscurantism of Dr. Moss on Freud, who is cited twice, but the Viennese quack surely contributed. The whole article is an exercise in showing off, signaling virtue (Moss is white), and trying to couch a real phenomenon, describable in simple English wors, in psychoanalytic jargon, which makes Moss look professional but obscures his point to those lacking the argot.

Click on the screenshot to read it (I believe it’s free), or get the pdf here or through judicious inquiry. The reference is at the bottom.

But I don’t recommend that you read it unless you need some amusement (or horror). It will at least teach you what passes for “thought” among psychoanalists.

The paper’s abstract, which I’ve put below the title, pretty much sums up the thesis. 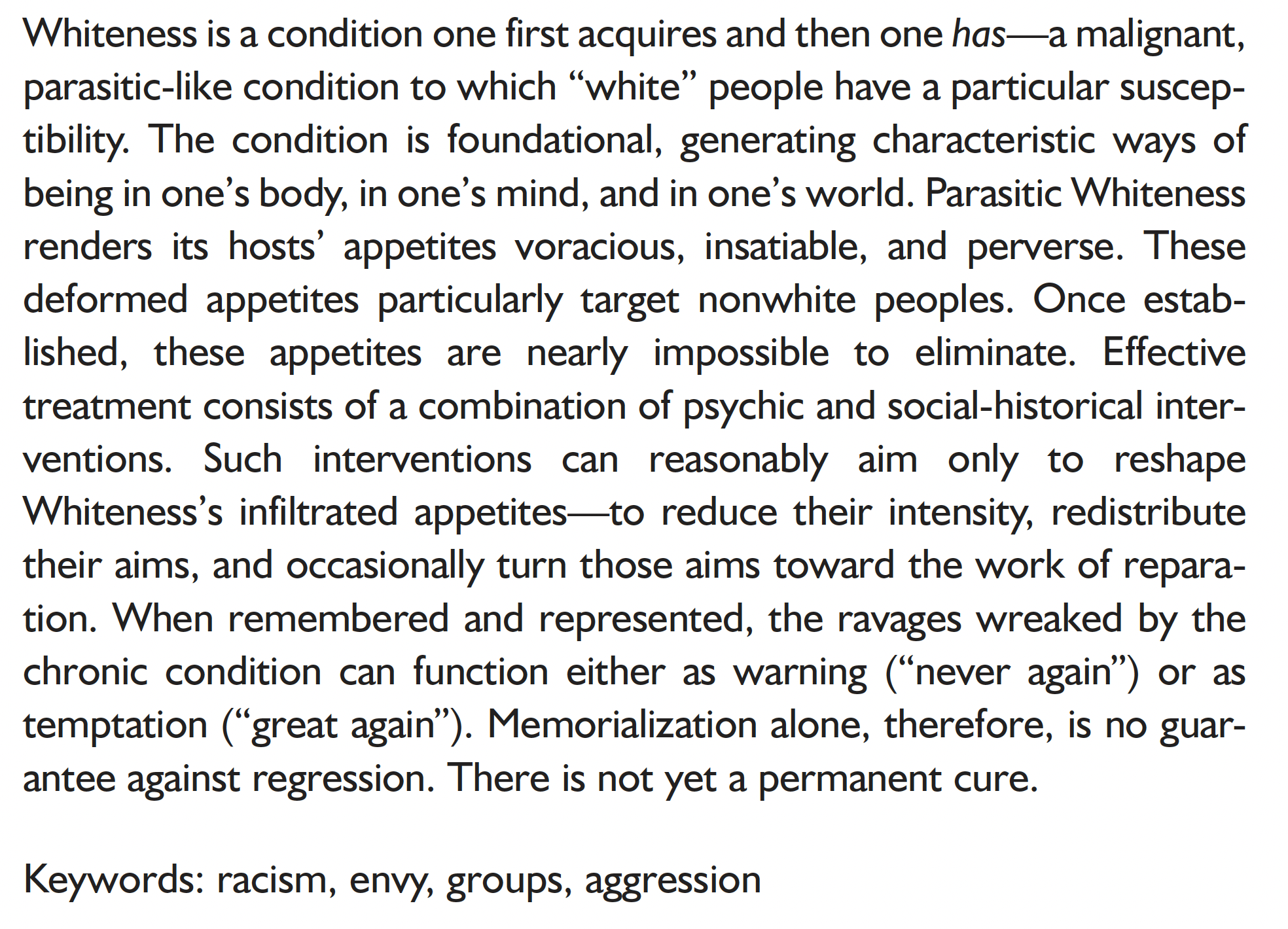 Moss gives two of his case studies of angry/neurotic racist patients from which he concludes that racism can never be eliminated in anyone. But the use of the term “Whiteness”, instead of “racism” (he doesn’t consider “Blackness” or “Hispanicness”), is designed to divide and anger people. For Moss distinguishes “Whiteness’ from being ethnically white itself (which Moss doesn’t see as a social construct). His distinction is below. Check out the second paragraph, which is only the beginning of a long and obscure screed, perhaps comprehensible only to his fellow quacks (remember, psychoanalysts are also M.D.s).

In what follows, I will capitalize Whiteness to signify Parasitic Whiteness— an acquired multidimensional condition: (1) a way of being, (2) a mode of identity, (3) a way of knowing and sorting the objects constituting one’s human surround. Whiteness should not be confused with lowercase whiteness, a commonly used signifier of racial identity.

Parasitic Whiteness infiltrates our drives early on. The infiltrated drive binds id-ego-superego into a singular entity, empowered to dismiss and override all forms of resistance. The drive apparatus of Whiteness divides the object world into two distinct zones. In one, the Whiteness infiltrated drive works in familiar ways—inhibited, checked, distorted, transformed—susceptible, that is, to standard neurotic deformations. In the other, however, none of this holds true. There the liberated drive goes rogue, unchecked and unlimited, inhibited by neither the protests of its objects nor the counterforces of its internal structures.

Here are a few quotes to give you the tenor of Moss’s theory, which is his. Like the rest of the article, it’s postmodern-ish twaddle:

Our merely unruly sexualities may exert a constant pressure to erotize the bodies and beings of strangers, transgressively aiming to defy the wall, to integrate those bodies and beings, to take them in. But the rogue sexualities of Parasitic Whiteness add to that. They negatively erotize nonwhite bodies and beings. These objects, now marked, are wanted still, but wanted not to be taken in but simply to be taken, not to be loved but to be hated. Holding these objects in place, inflicting pain on them—this sadism becomes the exquisite and economical solution to any apparent conflict between wanting and hating. Parasitic Whiteness further demeans its nonwhite bodies and beings by way of a naturalizing system of naming and classification. Once it has mapped and transformed its nonwhite objects into such a fixed taxonomical category, the rogue sexuality of Parasitic Whiteness can expand its aim. It permanently maps them as external/away, and from there, wherever that is, these objects are available for limitless use—limitless labor, of limitless kind.

What is the sweating analyst trying to say? That racism is a love/hate relationship based on “othering”. Well, I’m not sure how much love is in it, but hey, he’s a psychoanalyst!

Moss also seems to have discovered the notion of “verticality”, a complicated descriptor for “a hierarchy of worth”, as with white people feeling superior to blacks and blacks being made to feel inferior to whites.  All it really means is “bigotry”, but this “verticality” meme, which sounds scholarly, appears over and over again, making the article look more original than it is. Below he also drags in Freud, making Moss Freud-adjacent and quackish:

When targeting individuals, Whiteness opportunistically attaches to any psychic structure that maps self and object vertically. These vertical planes are ubiquitous and as such provide an abundance of potential host receptors for Parasitic Whiteness. Six separate, yet intersecting, such planes should be kept in mind here. (1) The ego’s foundation in a vertical split—pleasure inside, pain outside; good subject here, bad object there. The original object, then, is the bad object, the demeaned one, below and threatening, of whom Freud writes: “the ego hates, abhors and pursues with intent to destroy” (1915, p. 138). (2) The subject-object world of the paranoid/schizoid position. The emerging subject here is in constant struggle to maintain itself against threats emerging from bad objects, to withstand them, and, finally, to fix and locate them elsewhere enough, below enough, to settle in, to keep going.2 (3) The subject-object world of narcissism, of grandiosity and diminishment, of the Master and the Slave, of the all and the nothing, the highest and the lowest. (4) The subject object world of perversion: of the user and the used, the person and the thing, the whole and the part, the owner and the owned, the dominator and  the dominated. (5) The subject-object world of the oedipal triangle. . .

But I can’t go on. If you want to read it, go to the link or make a judicious inquiry for a pdf. One more obfuscation of the obvious: racism is a form of tribalism, so that you can find confidence and comfort in the bigotry of others: Here’s how he describes the tribalism of racism:

This vertical fragility makes us all susceptible to Parasitic Whiteness. Whiteness promises to turn anxious singularity into confident plurality; isolated frailty into collective might. Whiteness caresses its hosts with reassurances; never again, it can seem to murmur, will you have to be alone. An always strained and always jeopardized “I am” will necessarily be susceptible to this preformed dream of an always empowered “We are.”

At the end, Moss gives two (yes, just two) of his case studies tha—to him—demonstrate that racism cannot be eradicated from a person’s mind.  (He of course concludes that from only one form of treatment: psychoanalysis.) If you want some fun, read the case about the “pink monkey.” And note that this is the totality of his clinical “evidence” (only four papers are cited, one by Freud).

After you hack your way through the logorrhea, do you find anything new here? I didn’t, but I’m not an adept in this quackery. (There are, by the way, horizontal planes, too, which house your confrères.) Below  a picture of Moss, who is apparently white but not White.

There are of course racists in groups other than whites—though some would deny it. Had Moss written a similar article about them, it would not have been publishable, and he would have been attacked and then fired for racism. 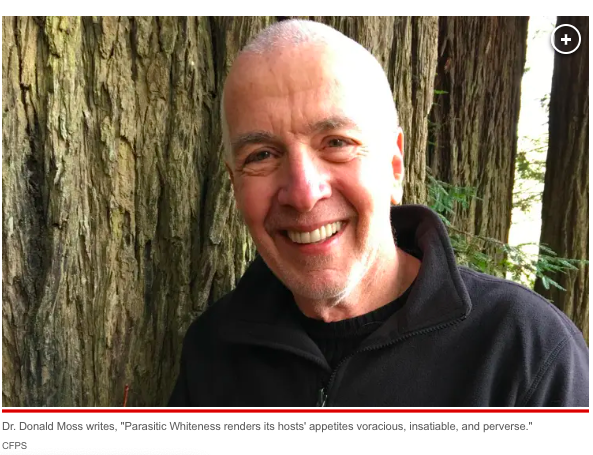 The only popular media I could find about this execrable article was, of course, in the New York Post, which mistook Moss’s concept of “Whiteness” for ethnic whiteness, thereby implying that Moss is denigrating all white people. (In fact, he doesn’t say what fraction of white people are White.) But the paper does cite some pushback from other quacks. Click to read:

The article sparked outrage online, including among other academics in the same field.

“How do my colleagues consider this scholarship? Anyone actuality take this seriously?” tweeted Pennsylvania-based clinical psychologist Dr. Philip Pellegrino. [JAC: that tweet no longer exists.]

Many others even doubted it was a real study until they confirmed that it was officially published.

“I was skeptical so I looked it up, and yeah this is real and now I want to throw my Psychology degree in the garbage,” one person tweeted. [JAC: that tweet no longer exists.]

“This racist vomit should be called out for what it is,” someone else wrote, saying, “This is the lowest and most dangerous form of racism masquerading as academic discourse. Shameful.”

I haven’t looked to see whether other psychoanalysts have criticized Moss’s article in journals, but it might be fun to watch all these loons squabbling with each other like cats in a laundry bag.